What to see in Aosta in one day

The story of my day-trip to Aosta begins with a phone call. It was a hot Saturday afternoon in Turin, about 6 pm, and I was taking a walk in Piazza d’Armi. I was experiencing two very stressful weeks both from a working and personal point of view and I wanted to spend the following Sunday outside Turin to distract myself a bit.

I picked up the phone and called my friend Stefano (my travel companion in Lyon).”Hi Ste, I can’t decide whether to go to the Sacra di San Michele or to Aosta tomorrow”. Stefano’s answer: “Let’s go to Aosta!”. I think he also wanted to get away from Turin for one day 😀 Not knowing Aosta at all, in the evening I googled the classic “What to see in…”, just to get a general idea of ​​what the city had to offer.

So, the following morning we met at 8 at Porta Susa train station, from where we took a train to Ivrea. From Turin there is no direct train for Aosta: you have to get to Ivrea, where another train for Aosta is waiting for you on the same track, departing a few minutes later.

What to see in Aosta

Aosta is located more or less in the middle of the Aosta Valley, in a valley crossed by the river Dora Baltea. It is surrounded by mountains and one of the tributaries of the Dora Baltea, the Buthier, runs through the city.

In ancient times, the geographical area was inhabited by the Salassi, a population of Celtic origin. After the Second Punic War, the attention of the Romans moved towards the Po Valley and the Pre-Alps, which could be an excellent natural defense against the barbarian invasions. The Romans invaded the area, submitting the Salassi, and founded the city of Augusta Praetoria Salassorum, of which many testimonies remain in the old town of modern Aosta.

Arrived in perfect time in Aosta, we took the road connecting the train station to Piazza Émile Chanoux. It is Aosta’s main square, where the Hôtel de Ville is located, which is the town hall of the city. It is a neoclassical building with two sculptures at the base, representing the two rivers that flow near the city: the Dora Baltea and the Buthier. On the roof there are a clock and a sundial. 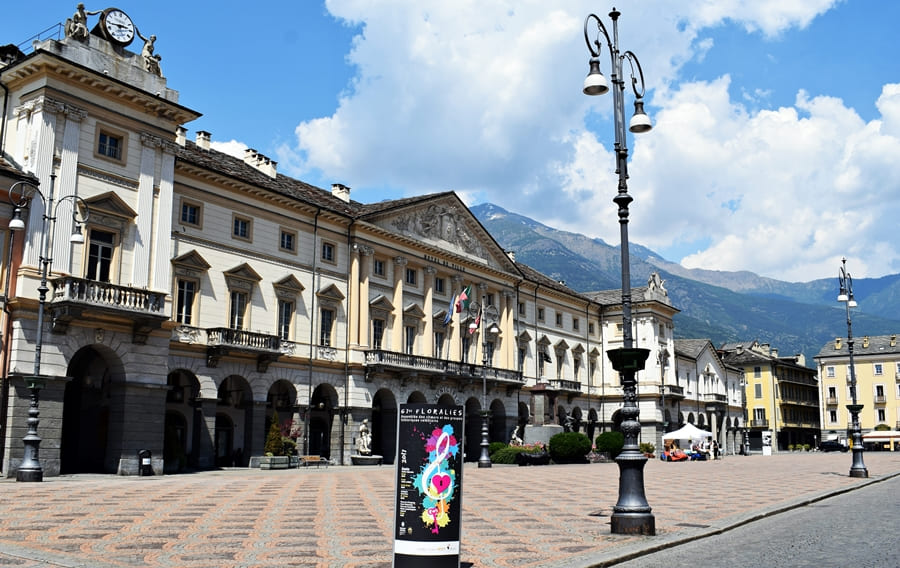 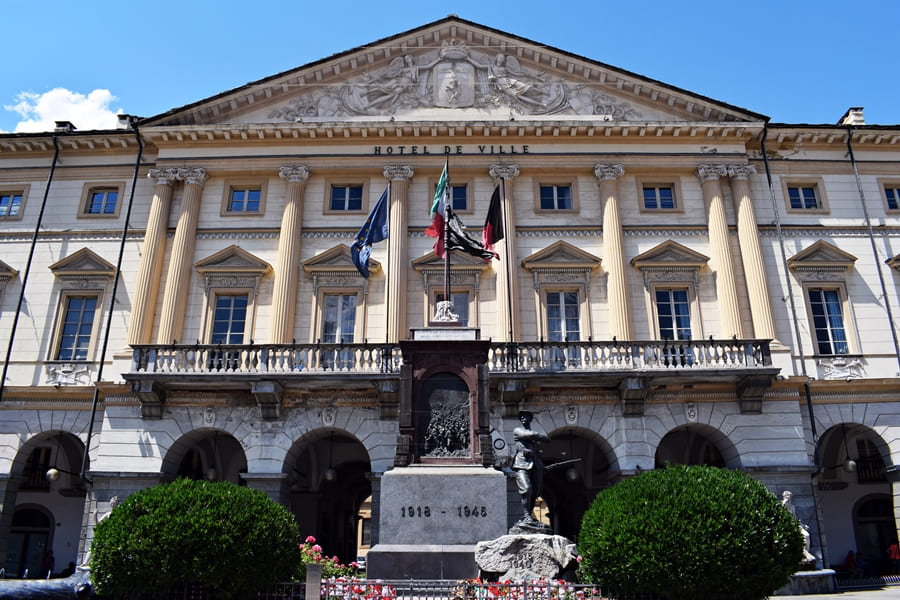 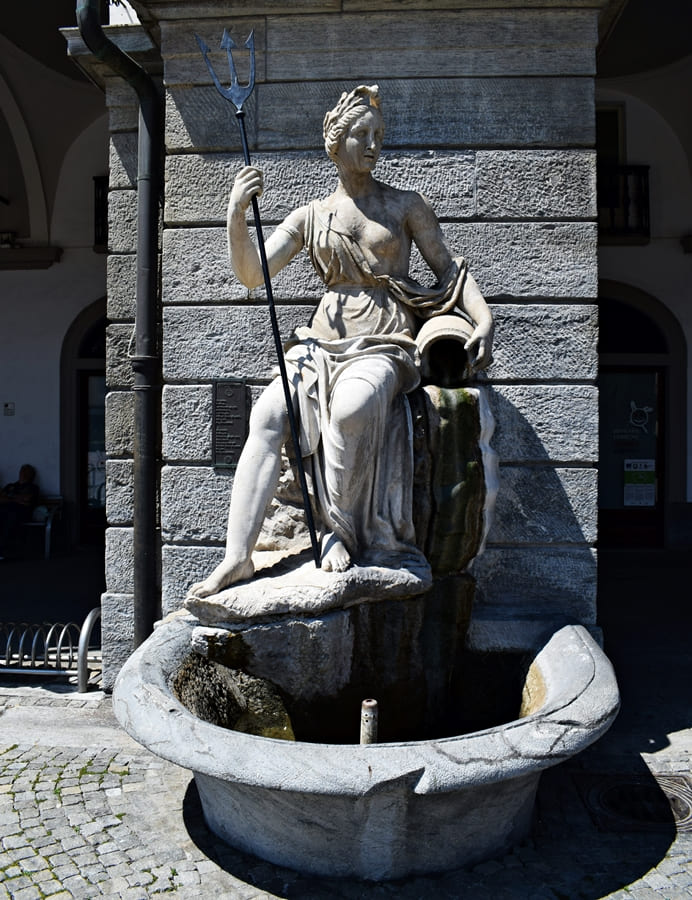 Statue of the Dora Baltea 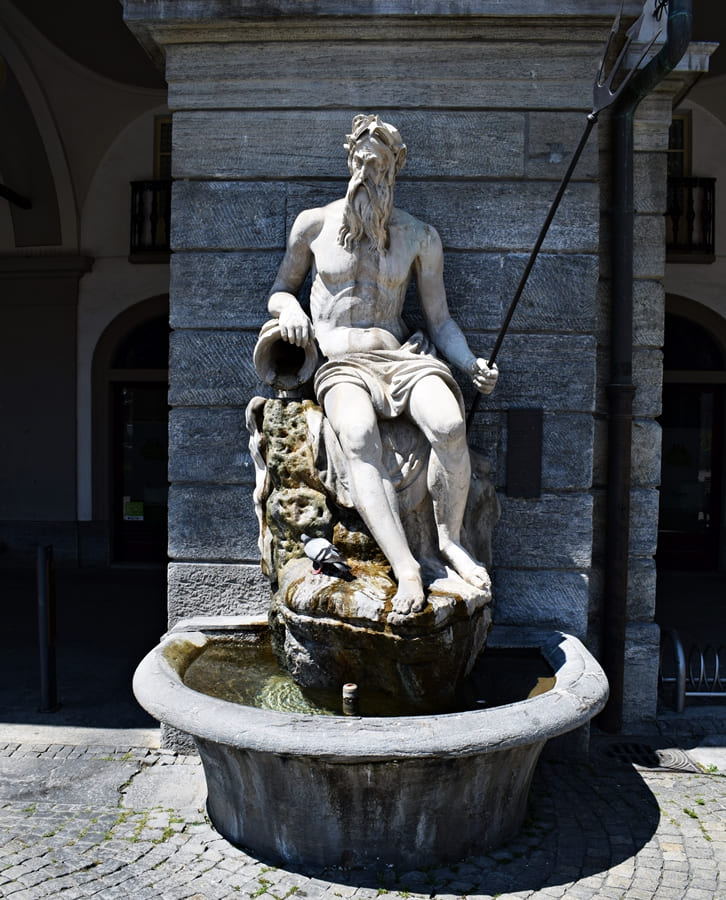 Before starting our tour, we headed to the Aosta’s Tourist Office, which is located right where Porta Praetoria stands. Among the few information on the city I had collected the evening before, I read that some of the Aosta top attracions are accessible only by buying a cumulative ticket (price: 7 euros), available at the Tourist Office. This cumulative ticket is valid for one year from the date of purchase and entitles you to access once each included attraction (so if you do not visit them all, the remaining attractions can be visited within the year with the same ticket). 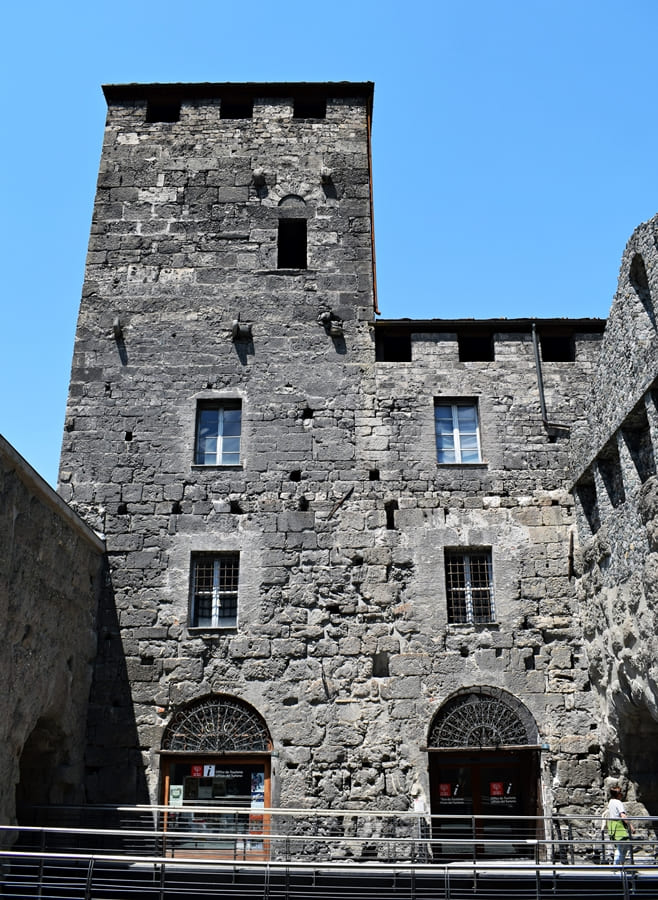 Porta Praetoria is the eastern gate of the city of Augusta Praetoria Salassorum and dates back to 25 a.C. It consists of two series of arches: the two central arches are larger and were intended for the passage of wagons, while the two narrower at both sides were used by pedestrians. On the sides there are the two defensive towers (the tourist office is located right inside one of them). The arches are made of blocks of slate, extracted from the bed of the Dora Baltea. 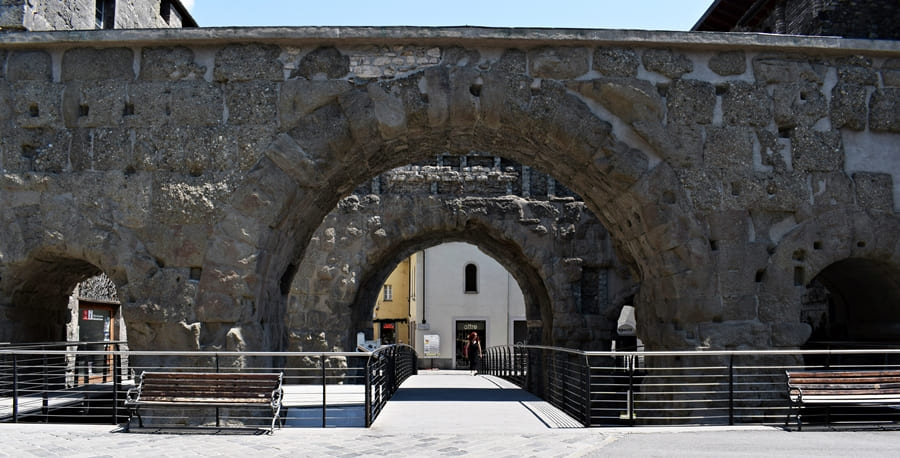 
Not far from Porta Praetoria, there are the remains of the early-Christian Basilica of St. Lawrence. The interior has a Latin cross plan and it is possible to see the remains of various liturgical rooms and some tombs. It was erected in the area of ​​the ancient Roman necropolis, above the tombs of the first martyrs.

The collegiate church of Saint Ursus

The collegiate church of Saint Ursus is located right in front of the early-Christian basilica. The square is dominated by a tall 12th-century Romanesque bell tower, detached from the church on the opposite side. The Saint Ursus complex consists of a church, the Priory and a cloister, accessible on the left side of the church.

Romanesque bell tower of the collegiate church of Saint Ursus 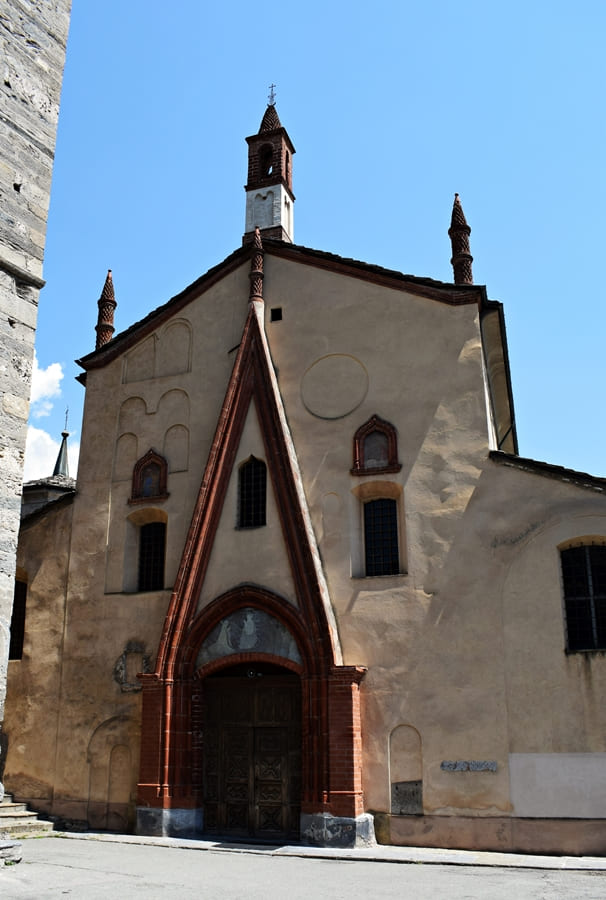 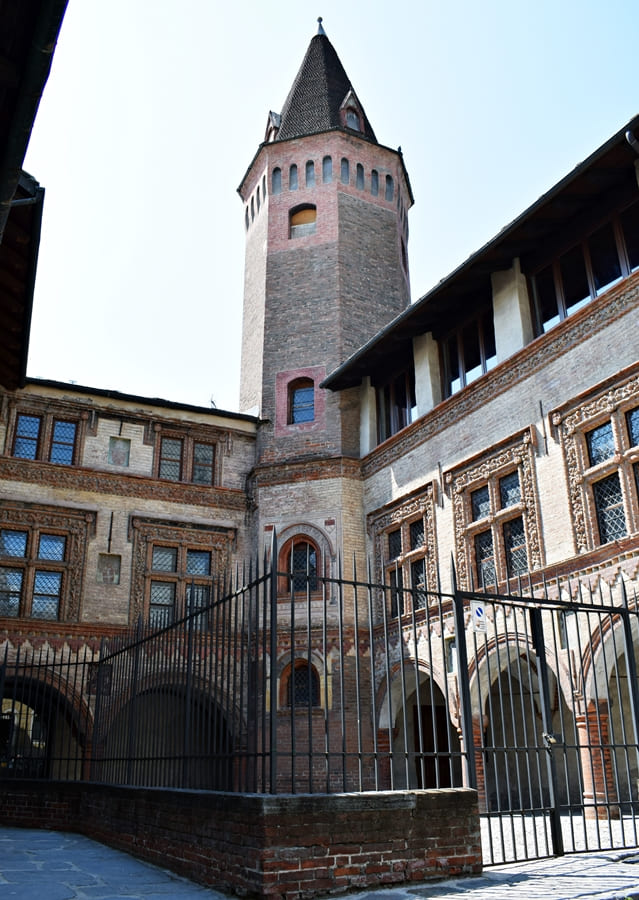 Palace of the Priory of Saint Ursus

Despite being simple inside, I liked the church a lot. The wooden 15th-century choir, the ceiling with wooden arches, the frescoes and the crypt are absolutely worth seeing. One thing that struck me inside the church was the ray of light that came from one of the windows, creating a particular effect within the church itself. 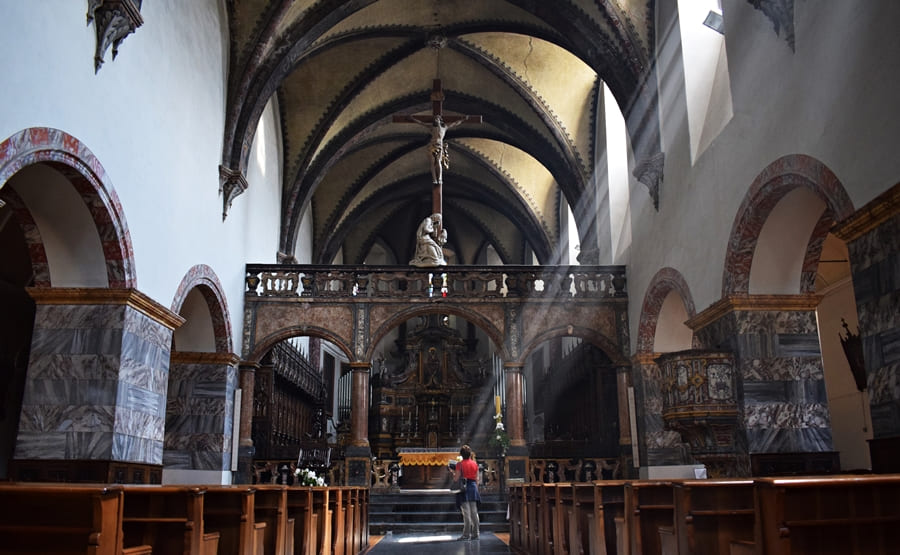 Interior of the church of Saint Ursus 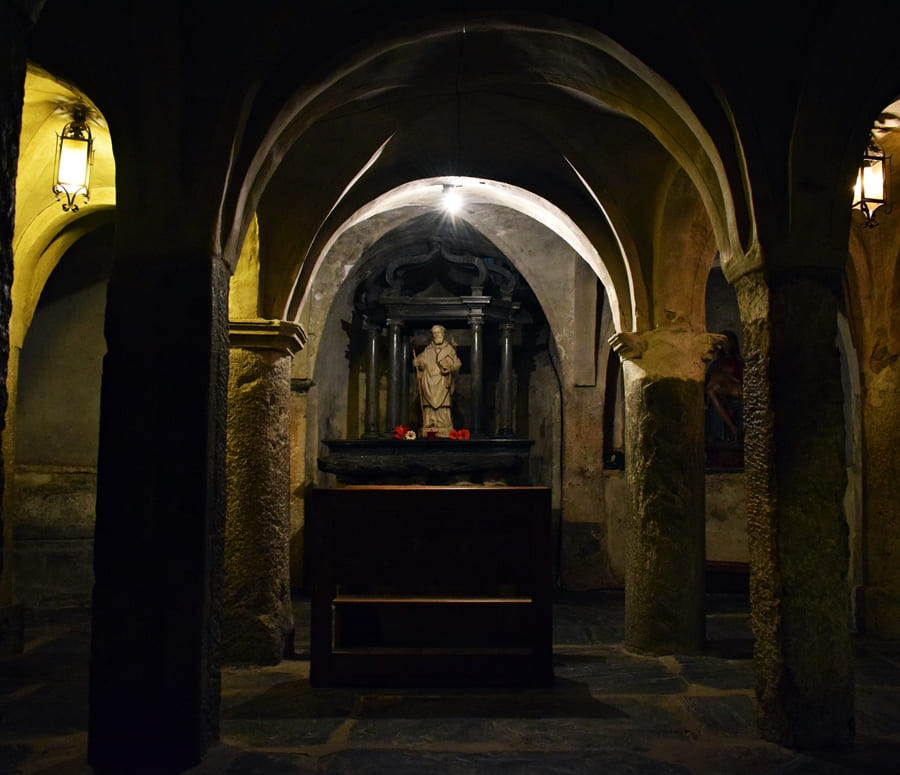 Entering the cloister of Saint Ursus means taking a leap into the Middle Ages. You find yourself inside a courtyard with a portico. The capitals and columns are made of white marble; but why are they dark? They have this colour because a dark ash-based paint was used to make them waterproof. The capitals are different from each other and depict scenes from the New and the Old Testament, moments from the life of Saint Ursus, fantastic characters and animals. 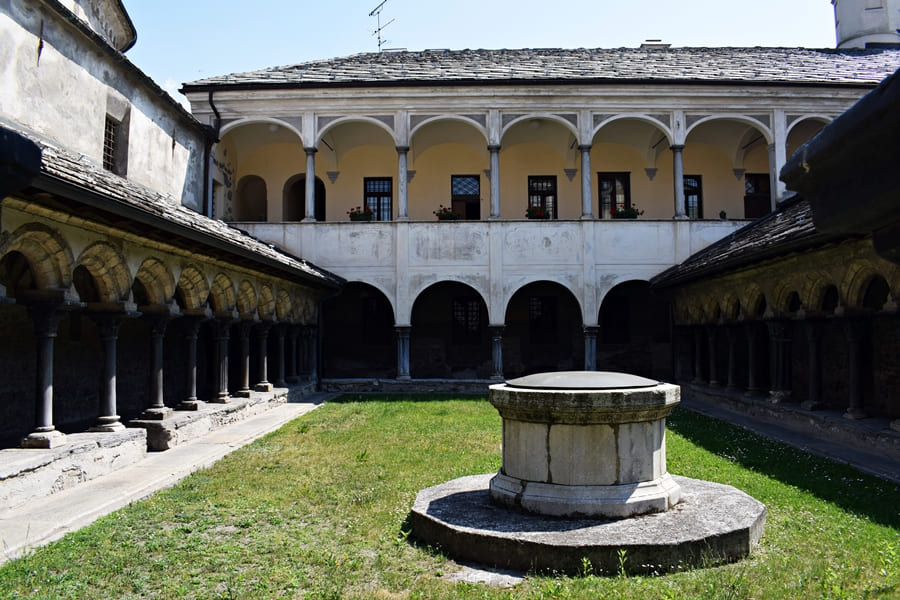 Courtyard of the cloister of Saint Ursus 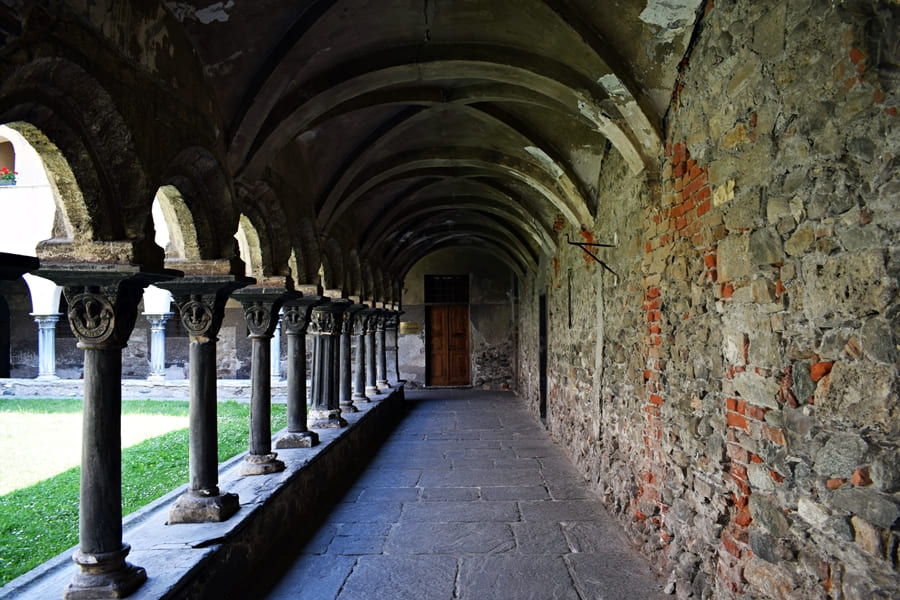 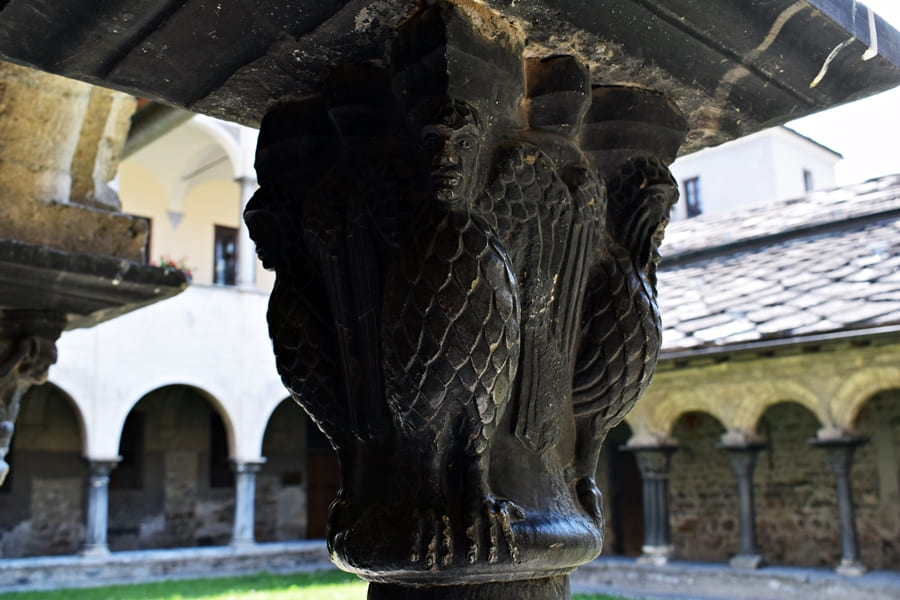 Capital of the cloister of Saint Ursus 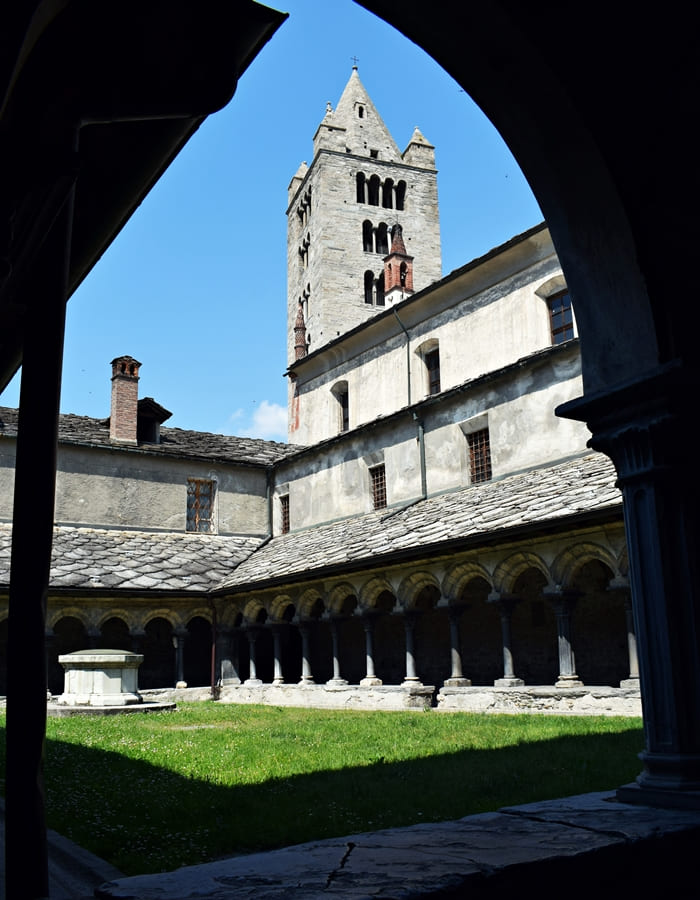 The bell tower seen from the cloister of Saint Ursus

Leaving the Collegiate church of Saint Ursus, we walked Via Sant’Anselmo up to the Arch of Augustus. It is located on the axis with Porta Praetoria and was built in 25 a.C., after the victory of the Romans against the Salassi. If you look carefully in the picture, you will notice a crucifix placed under the arch. It was added in the Middle Ages, when the Arch of Augustus became a place of processions asking for protection against the continuous flooding of the nearby Buthier river. The crucifix we see today, however, is not the original 15th-century one, but a copy; the original is kept in the Museum of the Treasures of the Cathedral of Aosta. 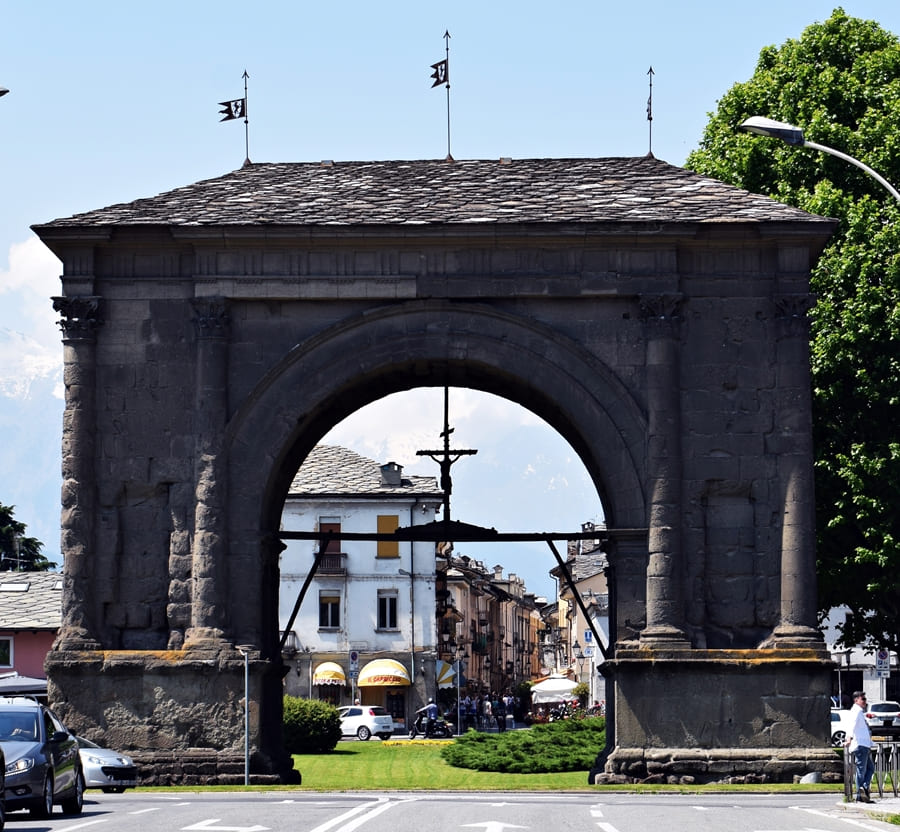 Continuing to walk for about fifty metres, we encounter the Roman bridge, built in the same period of the Arch of Augustus. 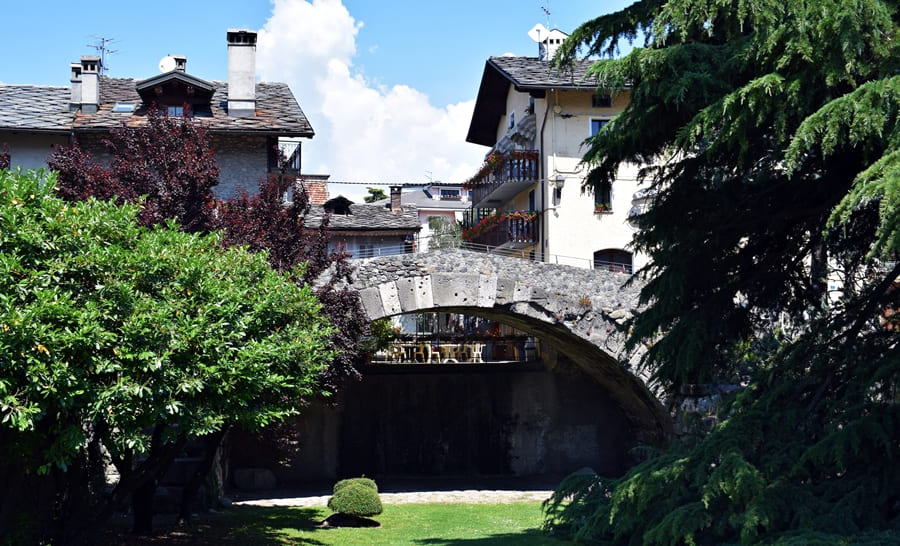 After having seen the bridge, we went back towards the centre of Aosta, looking for an open supermarket. Bought the necessary for lunch, we returned near the square of the Collegiate of Saint Ursus, where we “accommodated” in the shade of a large tree. The beauty of simple things: two friends, a tree to make a nice shadow from the sun, a sandwich (indeed, more than one) and a great desire to explore.

After lunch, we got going again. Back at Porta Praetoria, we turned right and there was the Roman theatre waiting for us.It was built a few decades after the foundation of the city, under Emperor Claudius. 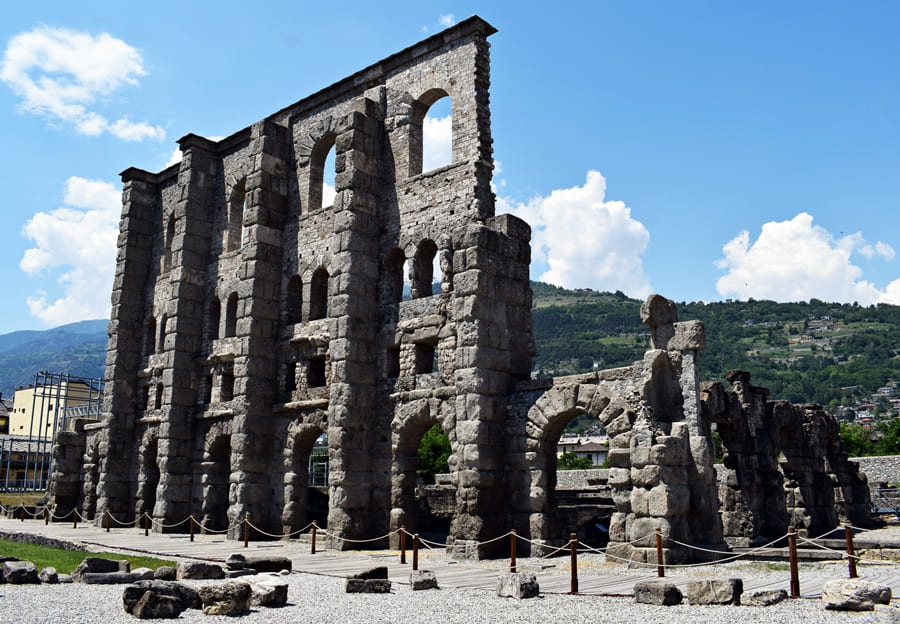 Of its facades, only one remains standing, which is about 22 meters high, with arches and three orders of windows of various sizes. Walking around among the remains of the theatre, a part of the stairway of the cavea can be easily recognized, which could hold up to four thousand spectators. 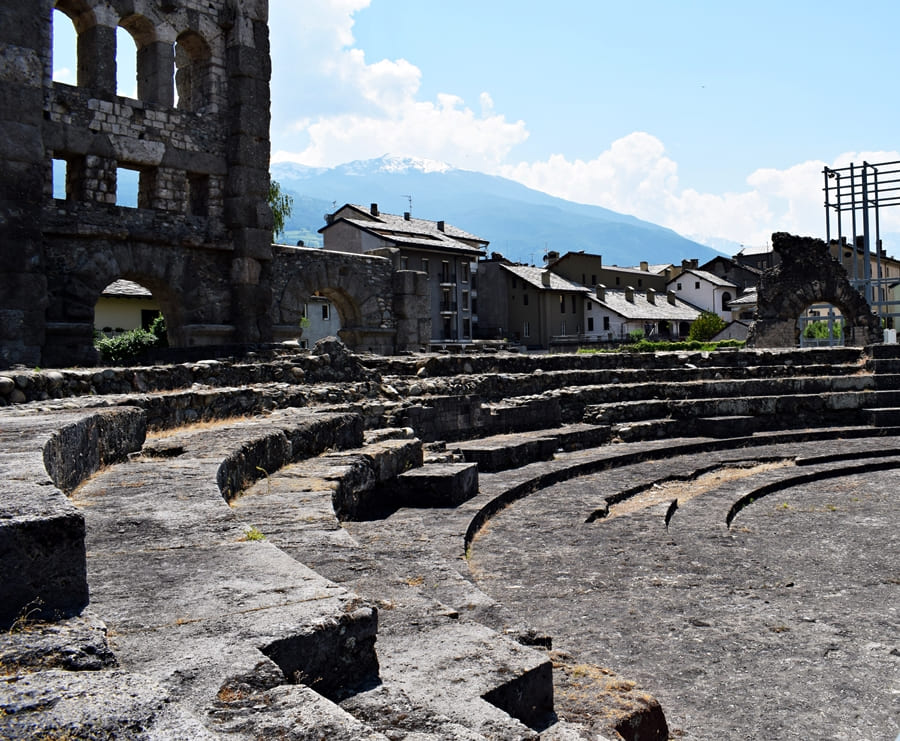 Cavea of ​​the Roman Theatre 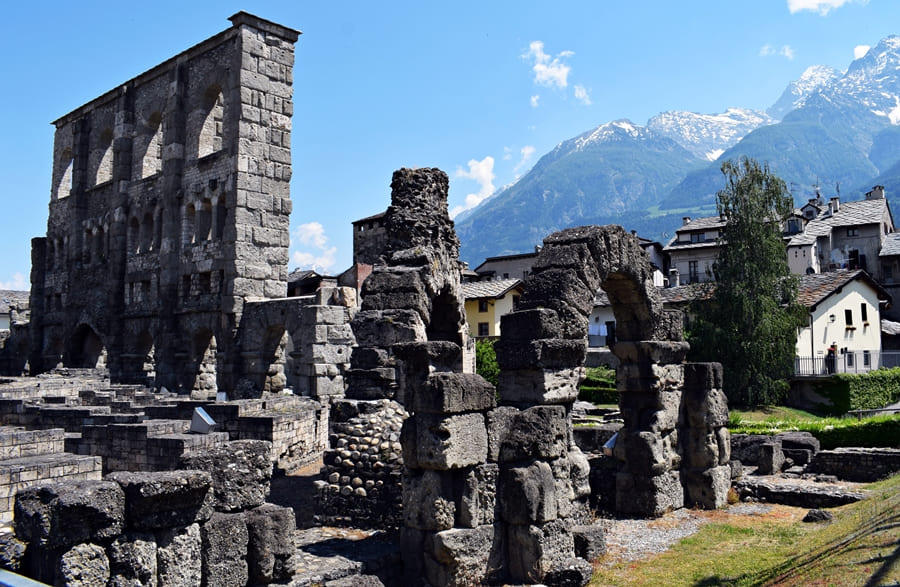 Remains of the Roman Theatre

After leaving the Roman theatre, we walked several streets in the centre of Aosta towards the Cathedral of St Mary of the Assumption and Saint John Baptist. The Cathedral presents itself on the outside with two very tall bell towers and a very ornate façade. These decorations, dating back to the 16th century, tell some episodes of the life of Jesus and of the Madonna, including the Assumption of Mary, to which the Cathedral is dedicated, represented on the lunette above the main door. 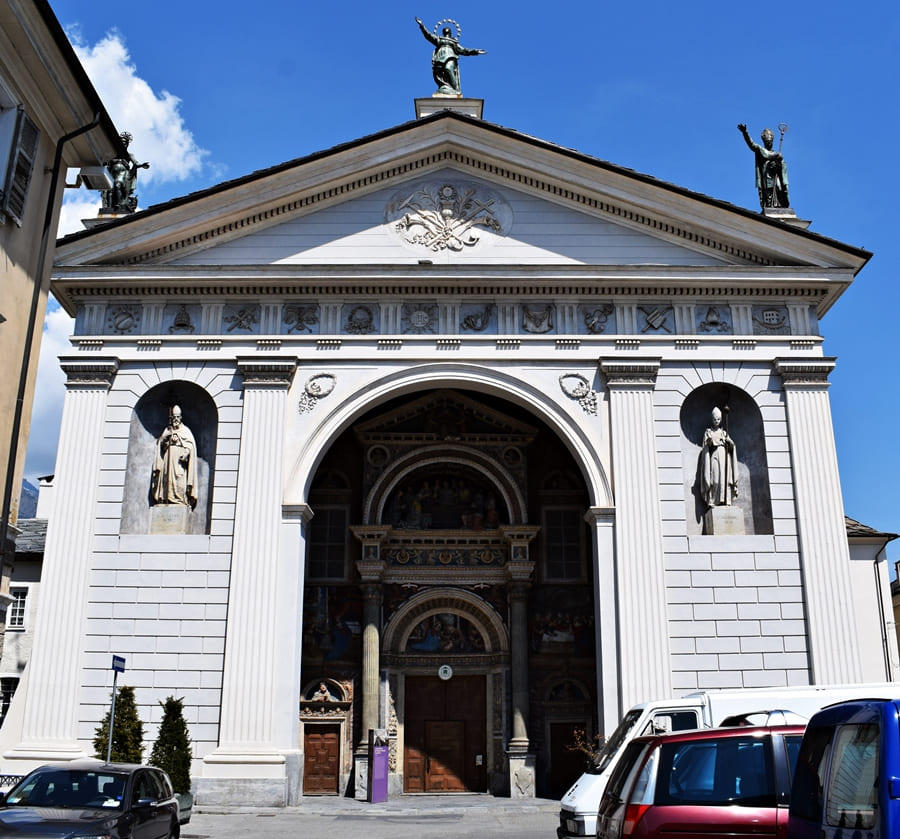 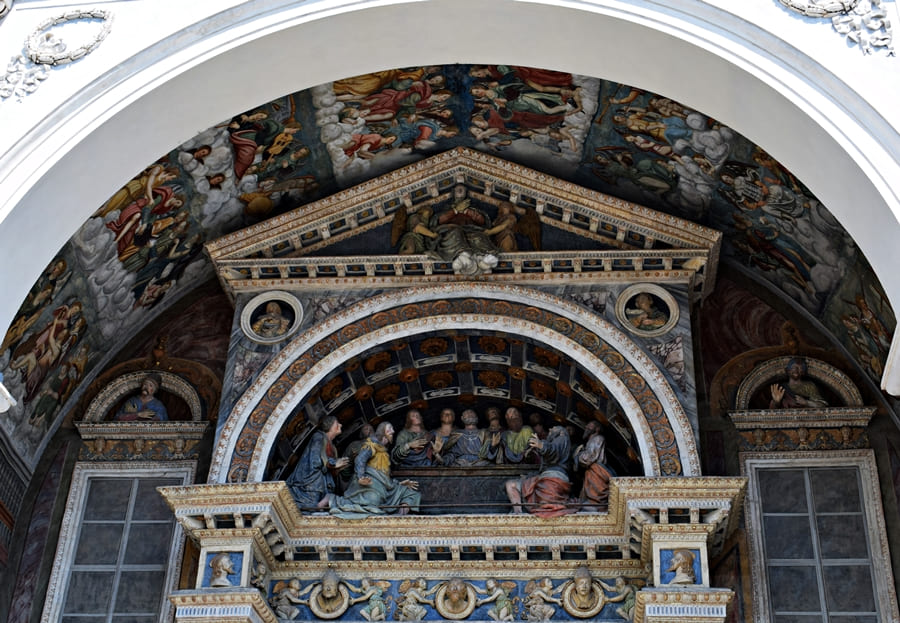 Detail of the Assumption of Mary, facade of the Cathedral of Aosta

Inside, the Cathedral is rather simple with white walls, with the exception of some chapels with 16th-century frescoes (for example the Chapel of the barons of Cly). 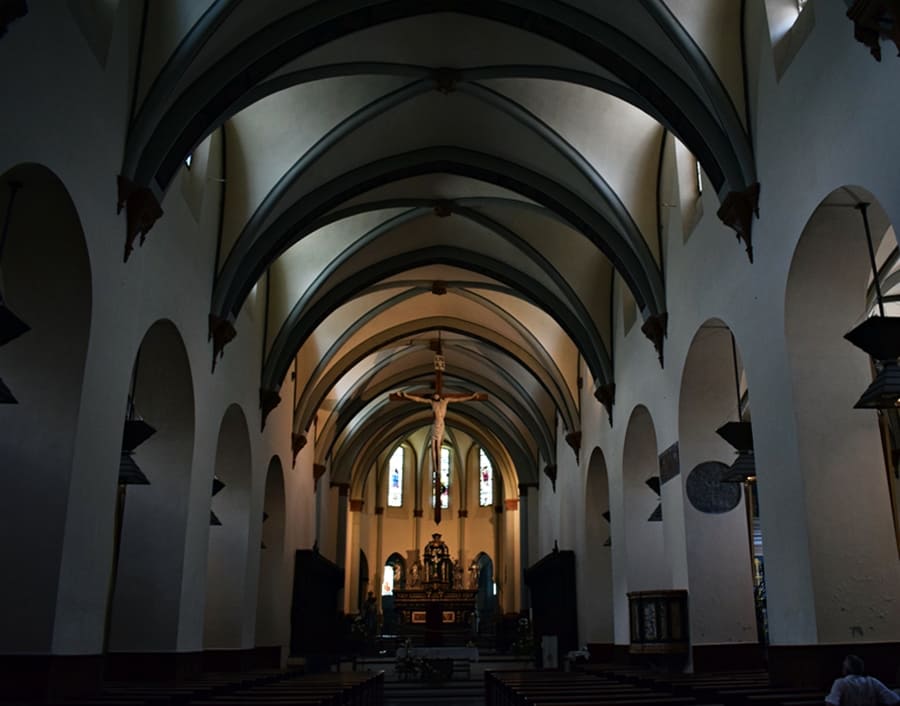 Interior of the Cathedral of Aosta

rescos of the Chapel of the barons of Cly

Just adjacent to the Cathedral of Aosta is one of the most particular attractions of the city: the Forensic cryptoporticus. It consists of an underground gallery with two naves, divided by arches, whose pillars are made of travertine.

It is not yet known with certainty what its function was. It is certainly known that it had a structural function, due to a difference in height in the area of ​​the ancient forum. According to some academics, it served as a transition zone between the sacred area and the area where public life took place. The gallery is lit by windows, which ensure air exchange and a constant temperature throughout the year. Undoubtedly the lighting system added in our days plays a special role to make the place even more suggestive.

Other things to see in Aosta

ROnce outside the Forensic cryptoporticus, we still had enough time to wander through the pedestrian streets of the historic center of Aosta. We bumped into the Cross of Calvino (also called Croix de Ville), built in the 16th century in memory of the expulsion of Calvinists from the Aosta Valley.

In addition to the Cross, there are several towers, such as the Leper’s Tower and Bramafam Tower. We also had time to pay a visit to the Archaeological Museum of Aosta, which was included in the 7-euros ticket. 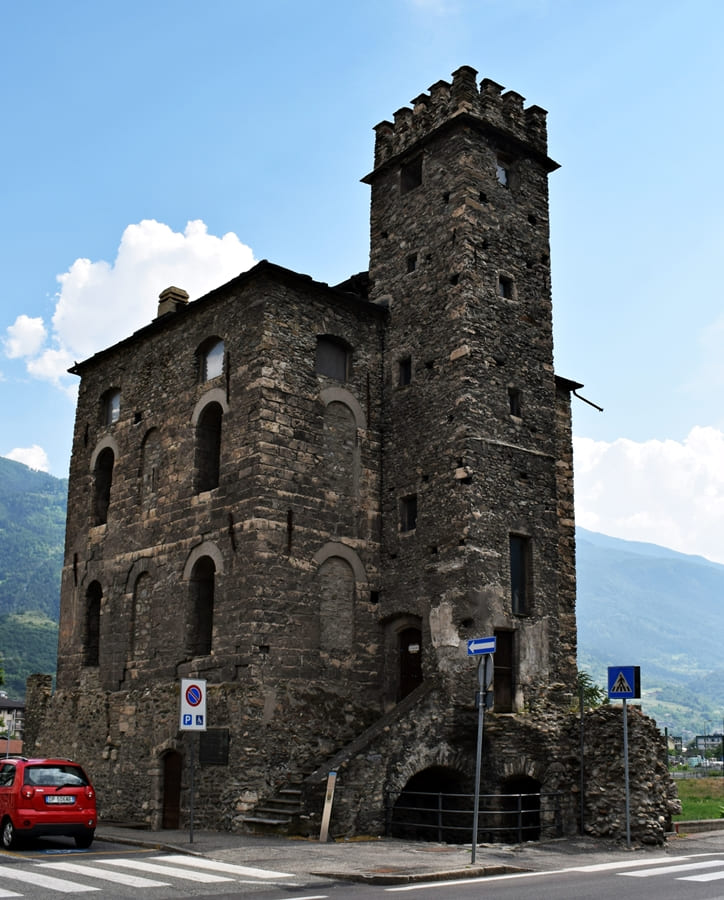 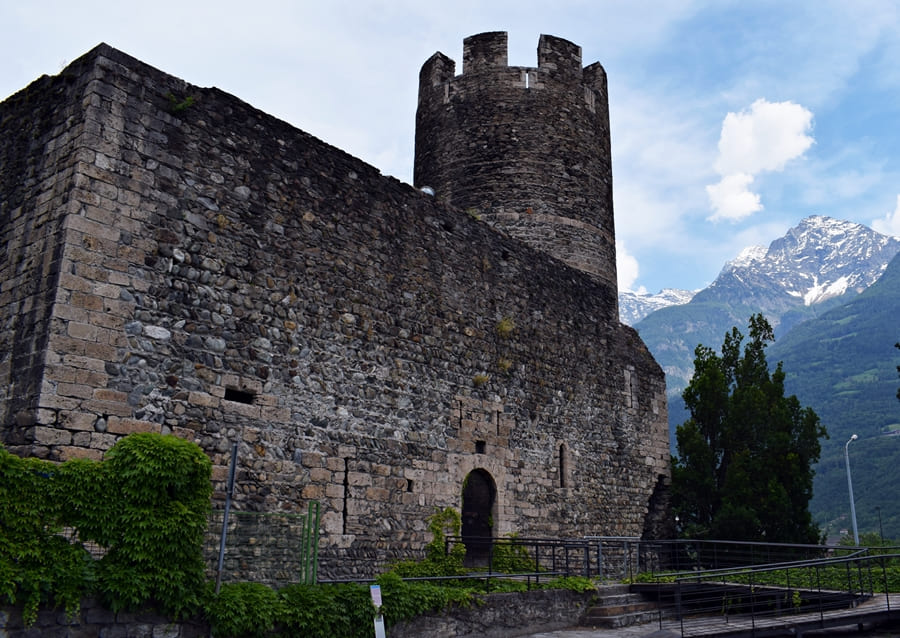 Aosta is a city you can easily visit in a day, actually even less. If you have a car, it would be ideal to combine a visit to the many castles in the Aosta Valley; It could be an idea for a nice weekend in the mountains (For more information on top attractions of the Aosta Valley, see the official website of the tourist board). 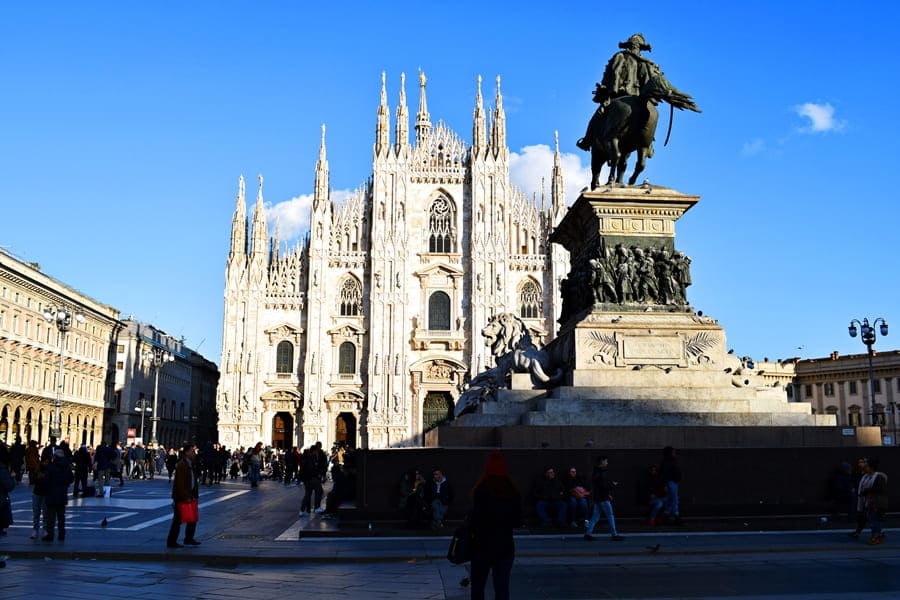 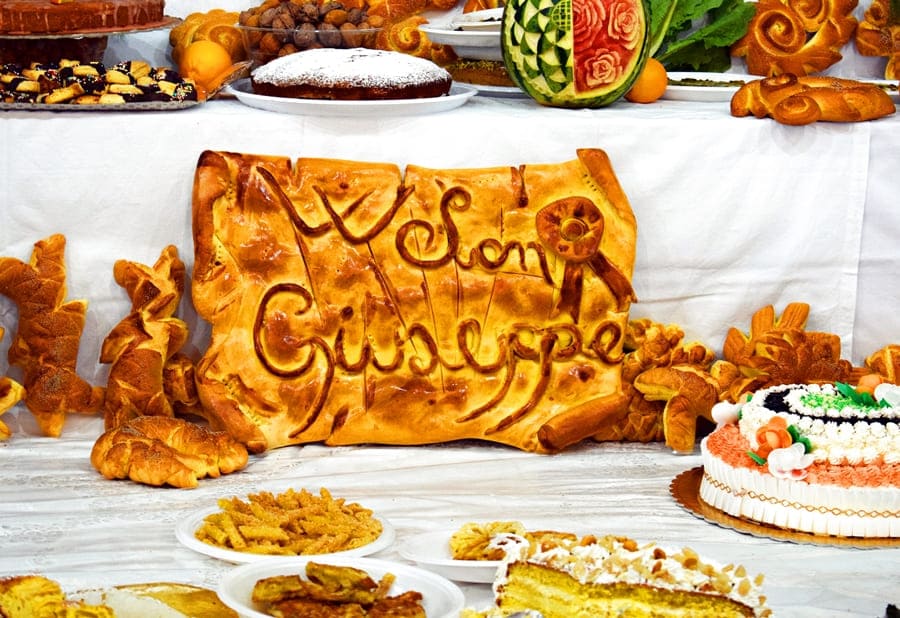