The villages of the Madonie Mountains: Petralia Sottana, Petralia Soprana and Gangi

Today I wish to talk about a lesser-known Sicily. Usually, when you think about Sicily, the first places coming to your mind are Palermo, Catania, Syracuse, Taormina, among the others. The most famous Sicilian places from a tourism point of view are all located along its coasts or close to them. And what about the hinterland? Have you ever wondered how the interior of Sicily is? I will show you it in this article, describing the villages of the Madonie Mountains.

Villages of the Madonie Mountains 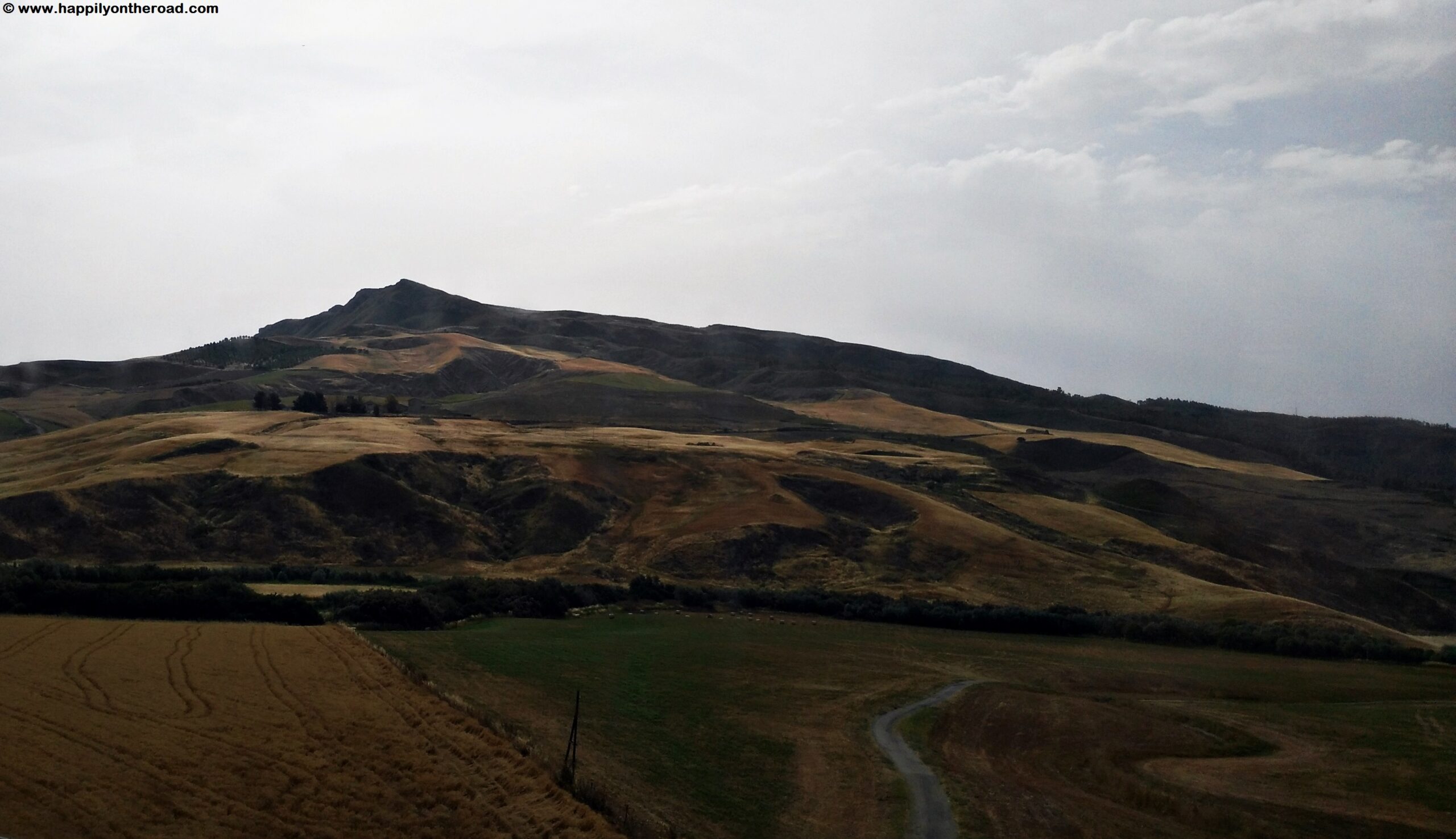 The Sicilian landscape is predominantly hilly, but as you move inwardly, there are genuine mountain ranges with a very different climate from the one of the coast. We find in fact the Nebrodi Mountains, the Sican Mountains, the Iblei Mountains, and the the Madonie Mountains, where I take you today.

The Madonie mountain range is located in northern Sicily and more precisely in the province of Palermo. Because of the peculiarity of its geology, the Madonie Park was included among the UNESCO World Geoparks in 2015. Inside the park, there are 15 municipalities belonging to the metropolitan city of Palermo, including the villages of Petralia Sottana, Petralia Soprana and Gangi. 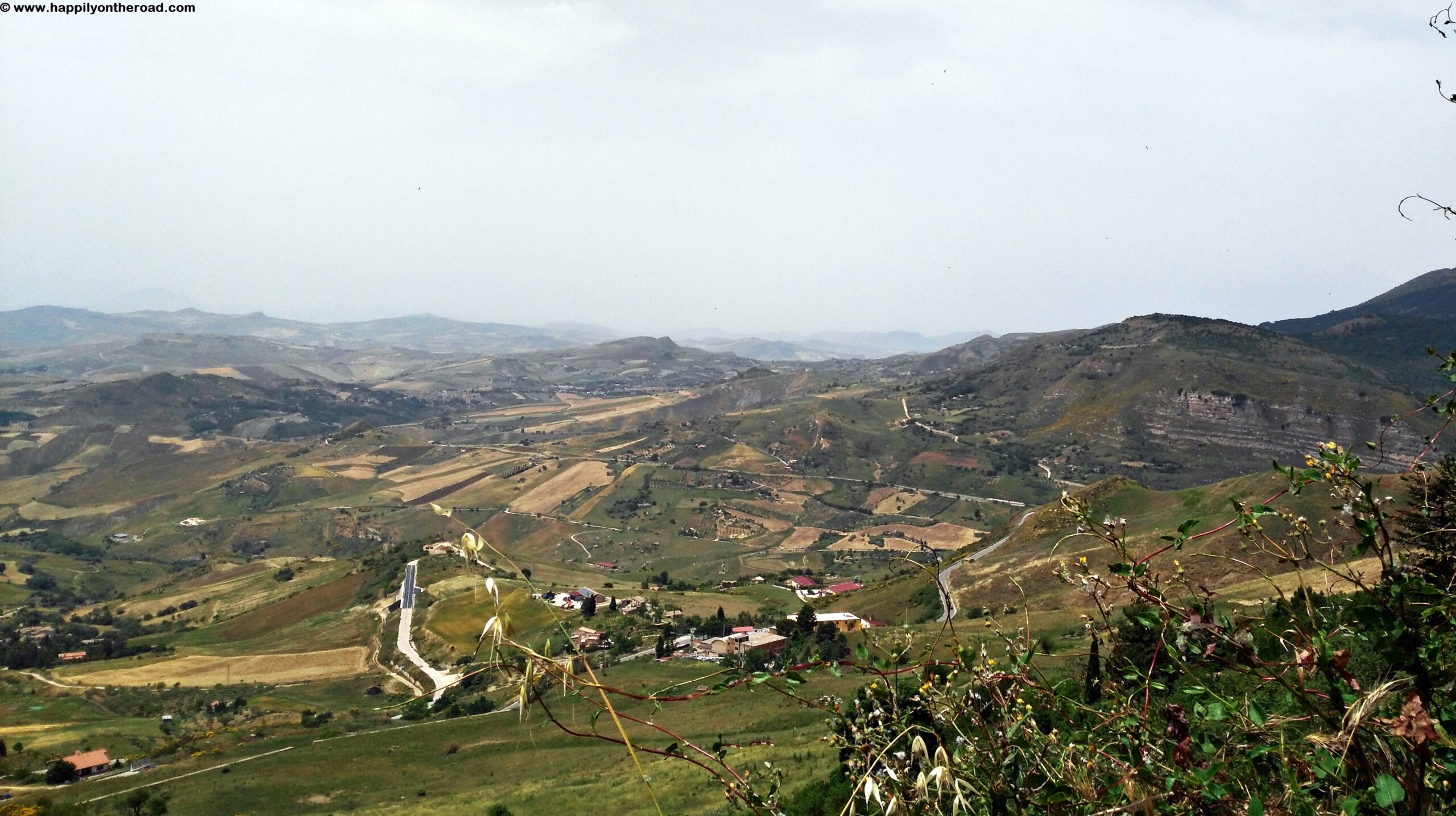 Coming from the A19 Palermo – Catania motorway, you have to take the SS 210 in direction Petralia Sottana. This road passes through the Madonie Park and let you see beautiful landscapes. Approching Petralia Sottana, the road passes under the village and from this point you can see how this town lies on a hill.

It is pleasant to walk through its narrow streets and bump into churches and monuments of medieval origin, such as the church of Saint Francis of Assisi, built in the 15th century. But now, let’s see what to visit in Petralia Sottana. 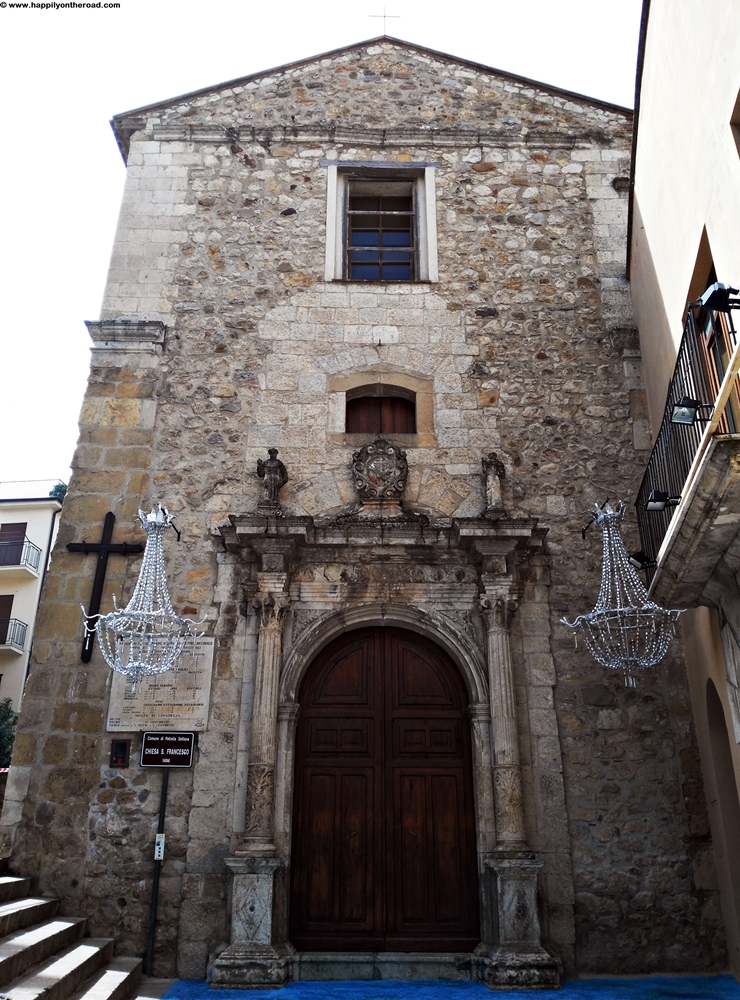 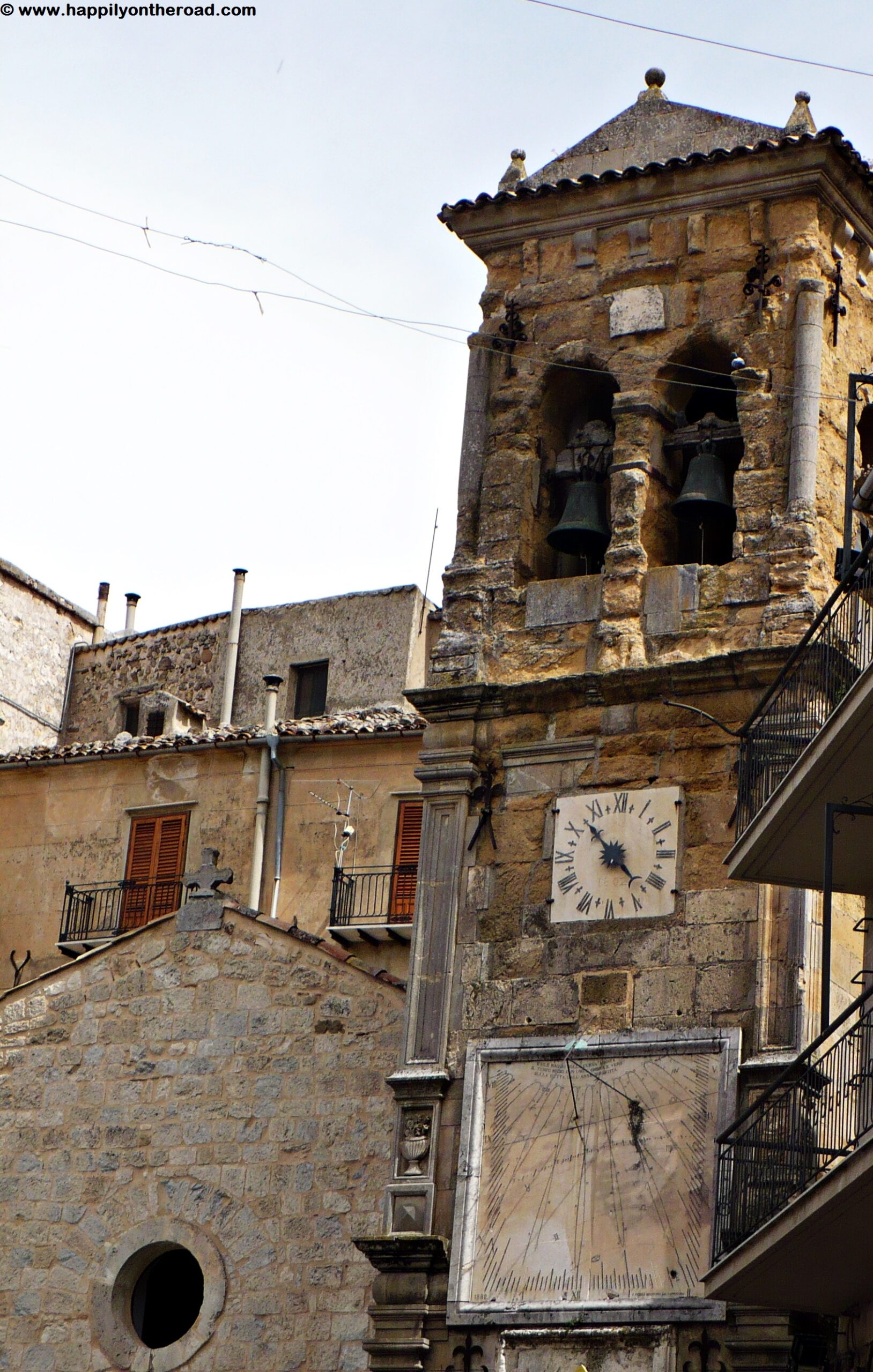 The main monument of the village is with no doubt the Mother Church, dedicated to the Most Holy Assumption. You can reach it going up the main street of the village. The church overlooks a square with a terrace, from which you can admire a view of the valley below. It was originally built in the 14th century, but there are only a few elements of that old building still present in today’s structure, such as the secondary portal. 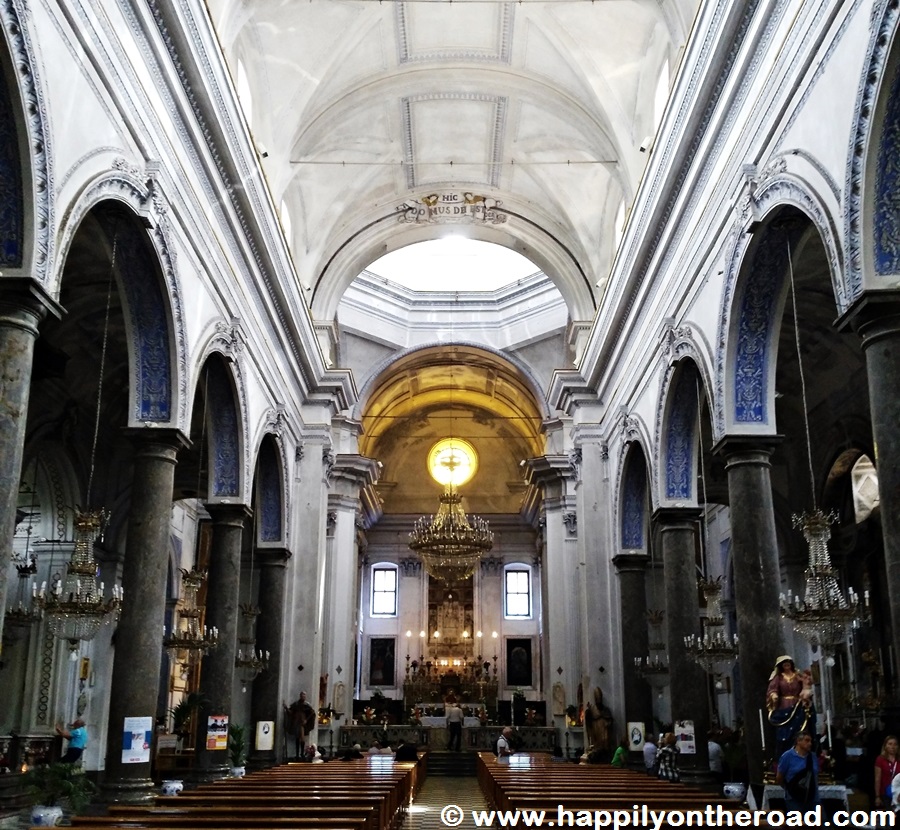 Interior of the Mother Church

Inside, the church is divided into three aisles and stuccoed with baroque elements; it also houses the statue of the patron saint of San Calogero, realized by Friar Umile from Petralia in the 17th century, and various pictorial and sculptural works of a time span between the 16th and 19th centuries. 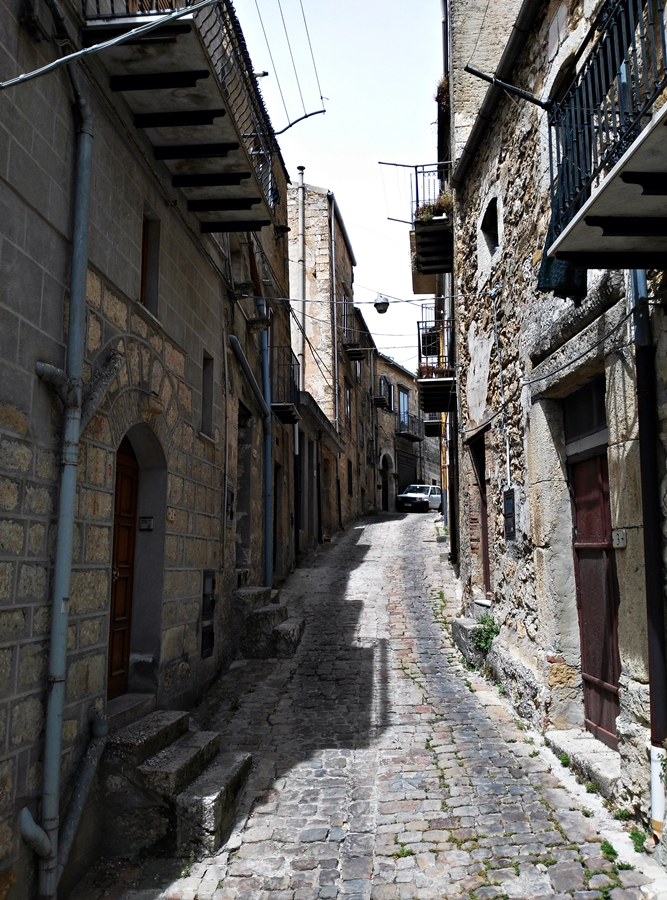 In the alleys of Petralia Sottana

Another stop is the Church of the Holy Trinity or Badia. From the Mother Church, you can reach it walking the uphill slopes above the main street. The church dates back to the 16th century and is annexed to a former cloister convent. Inside you can admire a 18th century organ and a great icon behind the altar, which depicts 23 episodes of Jesus’ life. 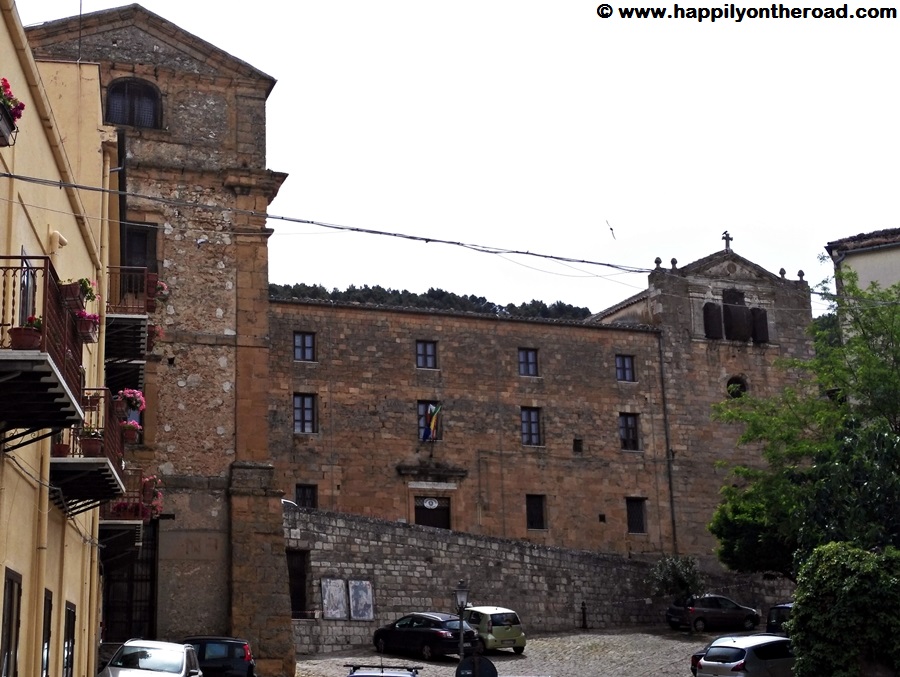 Church of the Holy Trinity or Badia 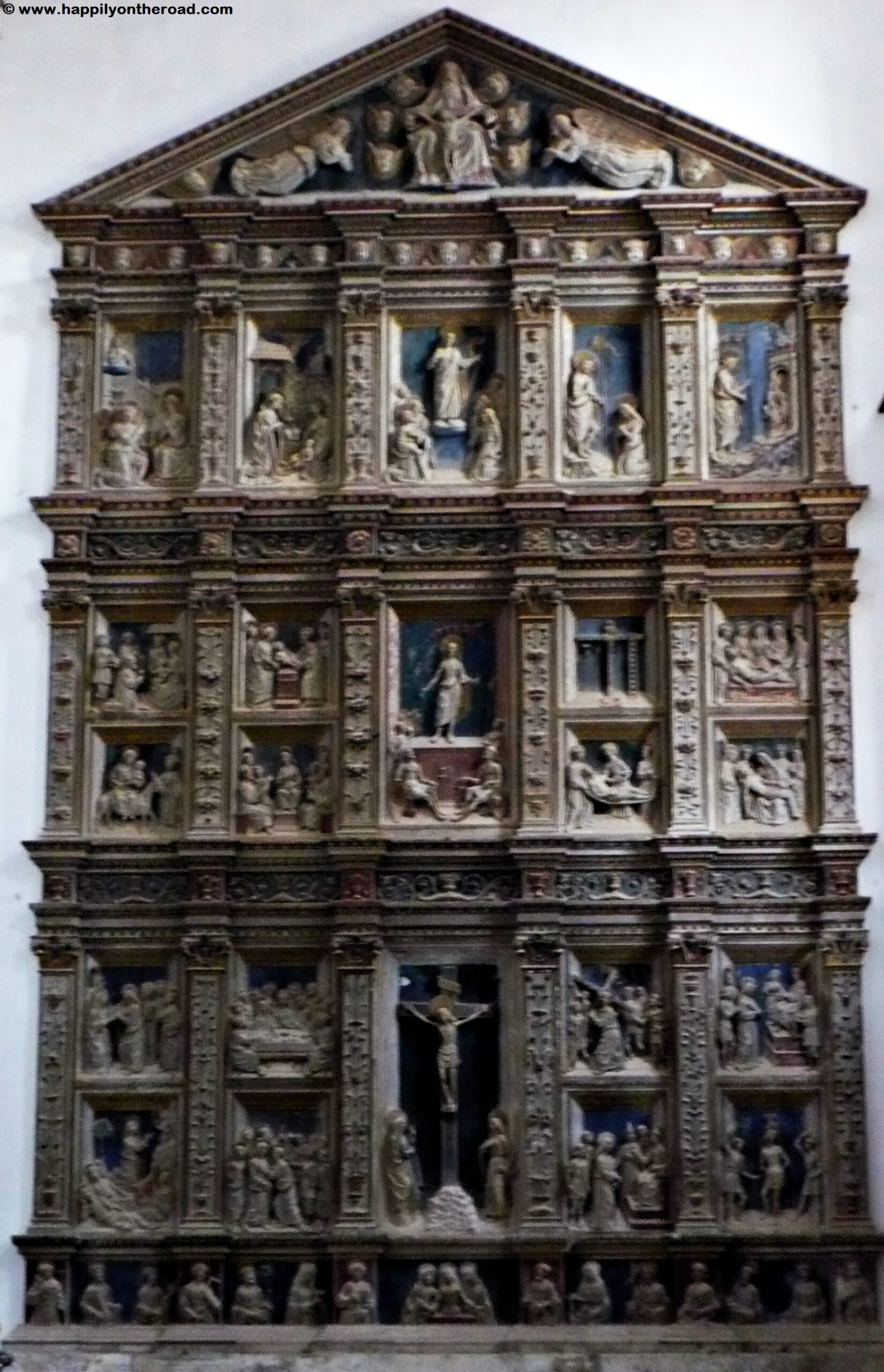 Icon of the Holy Trinity Church or Badia

Petralia Soprana is at just a few minutes’ drive from Petralia Sottana. It is the highest commune in the Madonie Park, at an altitude of 1,600 m above sea level, and is listed among the most beautiful villages in Italy. The style and the conformation of the village are very similar to those of Petralia Sottana. 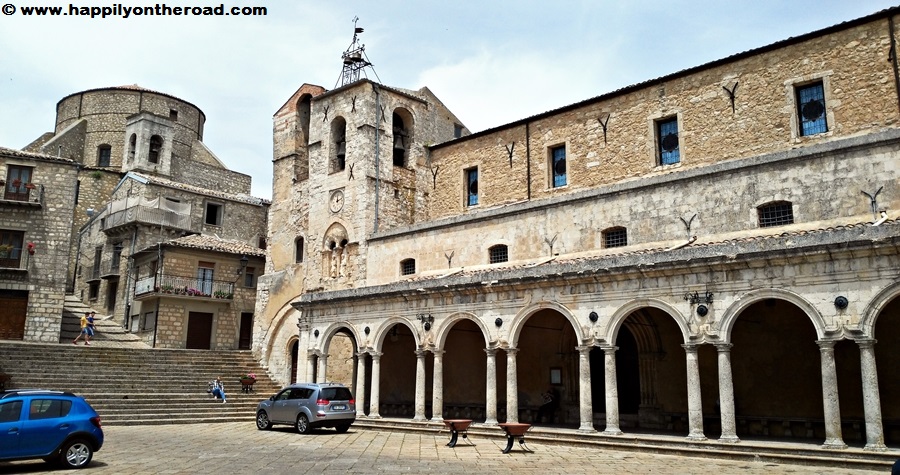 A must-see is the Mother Church, dedicated to Saints Peter and Paul. It rises on a square and has two bell towers: the first and tallest one dates back to the 15th century, while the latter was built in the 18th century. The two bell-towers are divided by an 18-column porch, which gives access to the church. Inside there are several 17th-century paintings and a crucifix attributed to Friar Umile from Petralia. 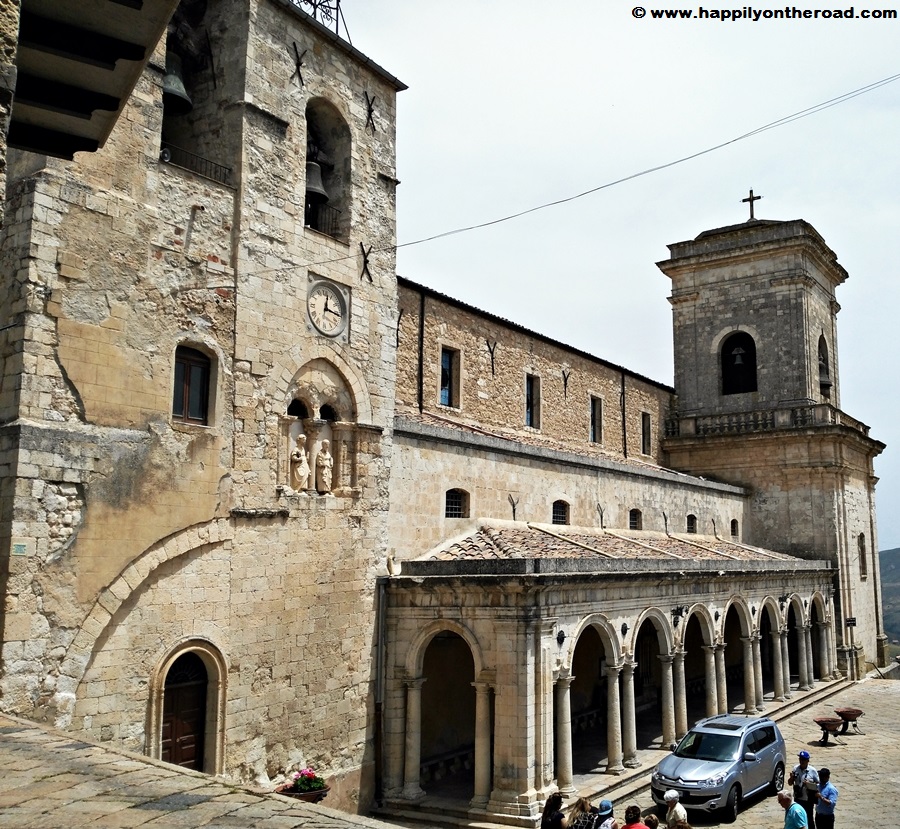 Mother Church with view on the 18th-century bell tower

Another important church in the village is the one dedicated to Our Lady of Loreto. It has a Baroque facade and was built from an ancient fortress. The original nature of the building is visible at the back of the church. Right from the back, you can see a fantastic view of the Madonie Park and the rock salt deposit, one of the richest in Europe, for which Petralia Soprana became famous in Sicily. 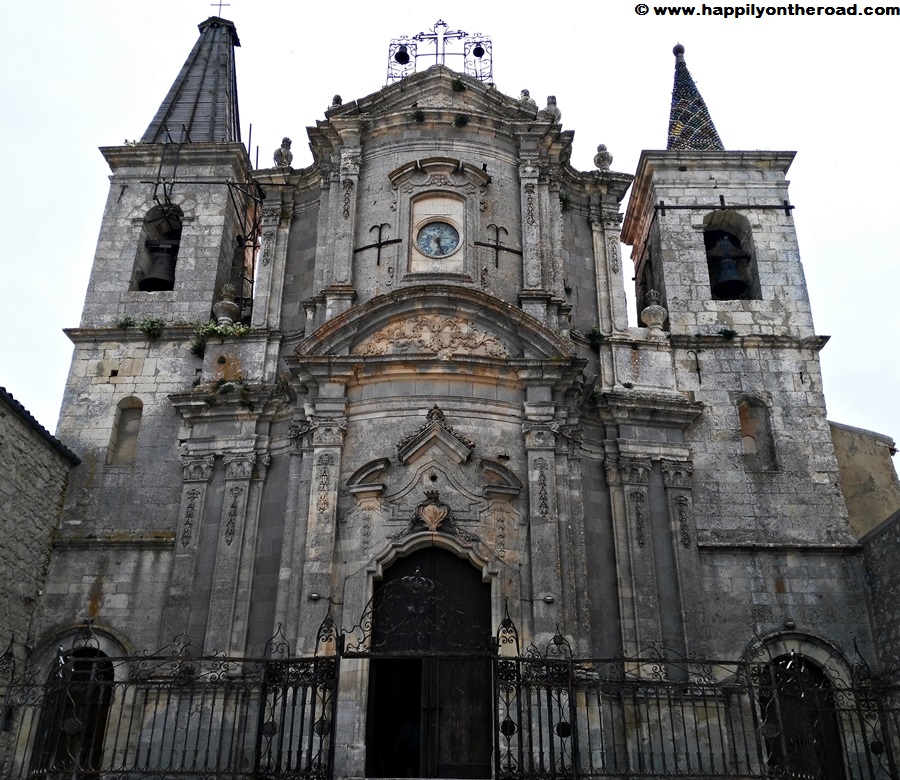 Church of Our Lady of Loreto

Now I tell you a little anecdote that happened to me inside the Petralia Soprana Mother Church. In this village, it is strictly forbidden to take photographs inside the churches, even without flash. It is a form of safeguarding the artistic heritage and these churches really deserve to be protected, since they are very beautiful. I did not know about this ban – or better, in my distraction I did not notice the dozens of A4-sized sheets placed in the church – and I took a picture of the central aisle (my blame). A gentleman who took a pic after I did myself got scolded by the sacristan, as soon as the latter realized what had just happened. I can say that I am one of the few people who have a picture of the interior of the Mother Church – or at least I am among those who have not been caught red handed – but I have decided not to publish it for compliance with the ban.

The last stop of this tour of the villages of the Madonie Park is Gangi, awarded as most beautiful village in Italy in 2014.

Of the three villages I visited, it is the biggest and, consequently, the one with several places to visit; I think that only Gangi deserves a whole day. Unfortunately I could see a few things, since I spent just one afternoon in Gangi – a reason to go back!

A must-see attraction in Gangi is the Church of San Nicolò. While approaching the church, the first thing that catches the eye is the Ventimiglia Tower. Today it is connected to the church main building, also serving as a bell tower, while centuries ago it was used as a watchtower. 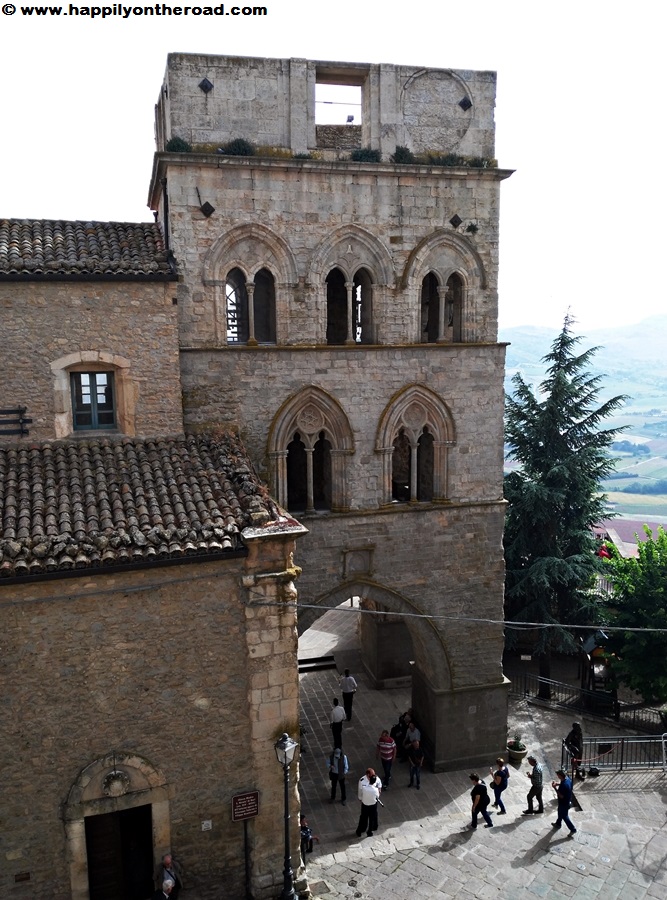 The interior of the church consists of three decorated naves. But two are the things worth a visit in this church: the first one is the great canvas of the Universal Judgment painted by Giuseppe Salerno, dated 1629; the second one is the crypt, called “a fossa di parrini” (the pit of the priests). Paying 2 euros, you can get down the church crypt, where you can see the mummies of some priests of the Mother Church in charge between the 18th and 19th centuries, standing upright and with priestly dresses. Inside the crypt, you can also see the room used for the mummification process. If you want to see the photos of the crypt, you can click here. 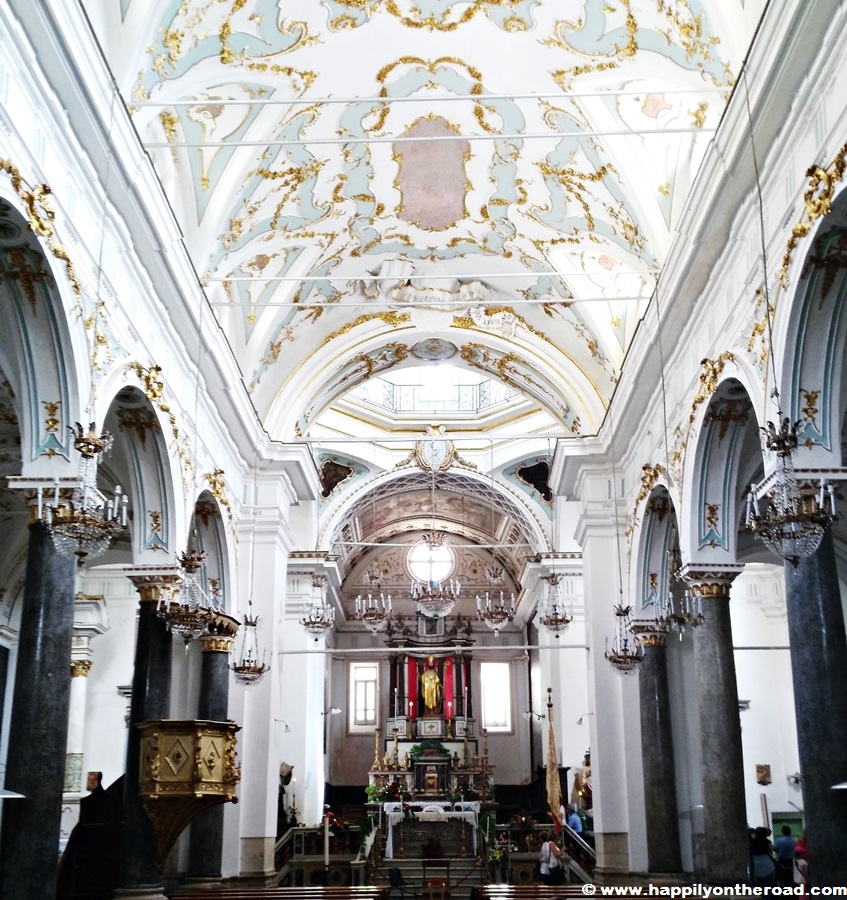 Gangi. Interior of the Mother Church 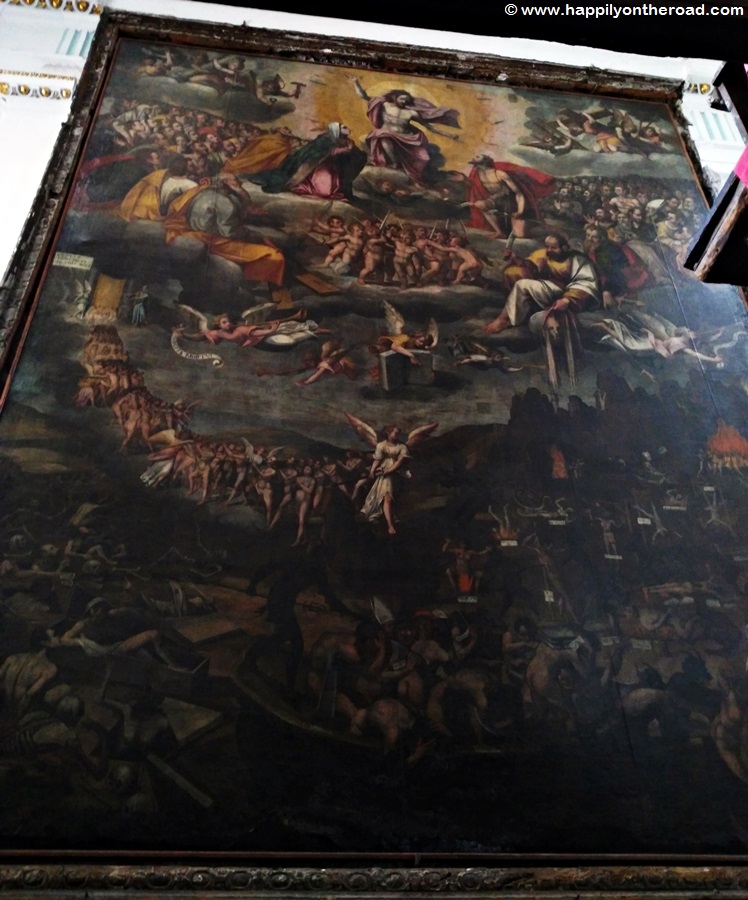 The “Universal Judgment” by Giuseppe Salerno

Another obligatory stop in Gangi is Bongiorno Palace. It was built by the Bongiorno noble family in the middle of the 18th century and was also the seat of the Accademia degli Industriosi of Gangi. Today, however, it is used as seat of the town council. The beauty of this palace lies in the sumptuous frescoes that decorate the ceilings of its rooms. 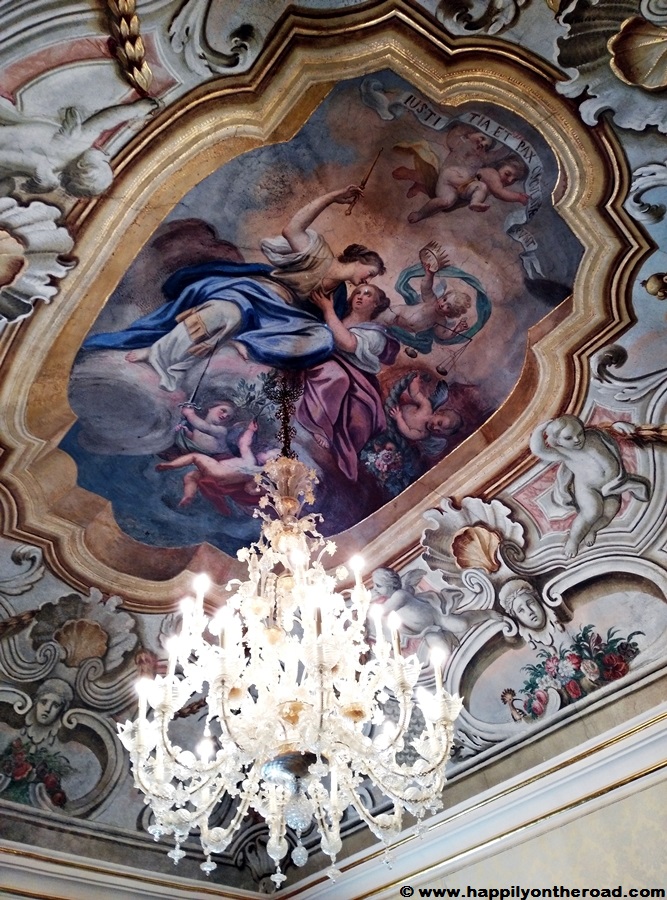 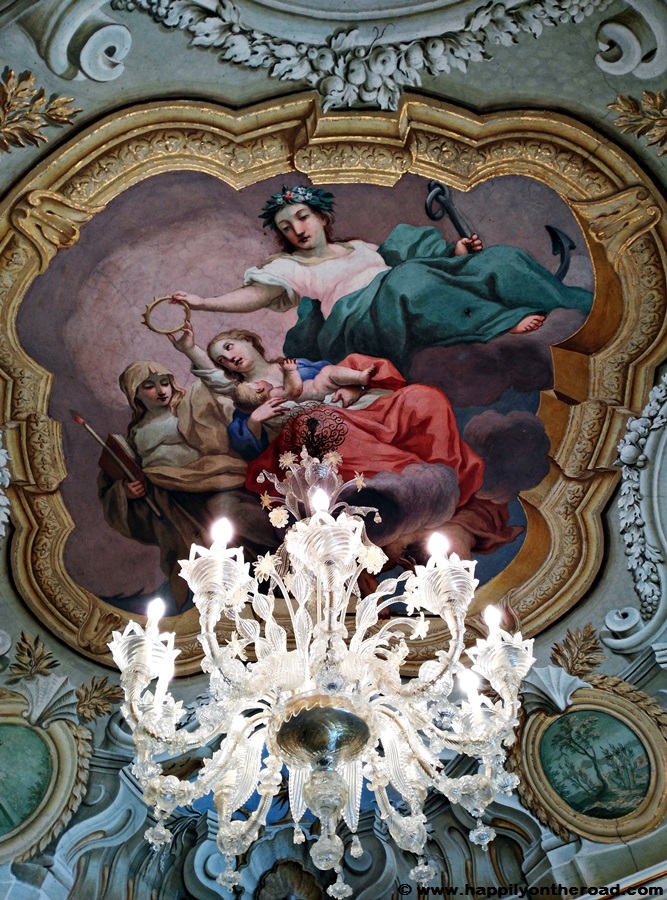 The frescoed ceiling of Palazzo Bongiorno in Gangi

To end the visit of Gangi with a bang, I gave myself a few minutes to admire the amazing view from the belvedere of the village, near the Mother Church. From there you can enjoy a magnificent view of Gangi and the Madonie Park, even though unfortunately it was ruined by a slight mist that day. 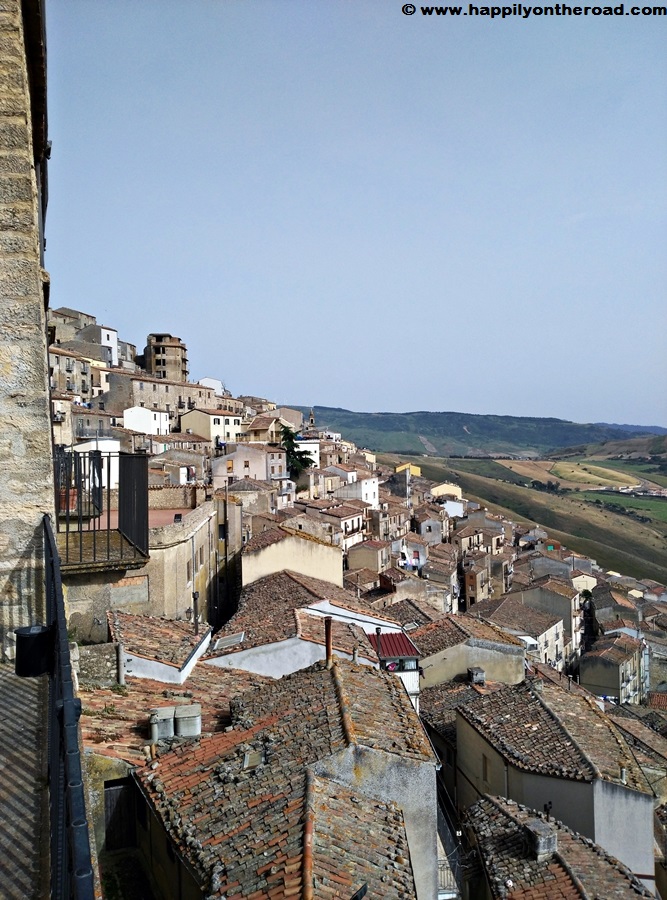 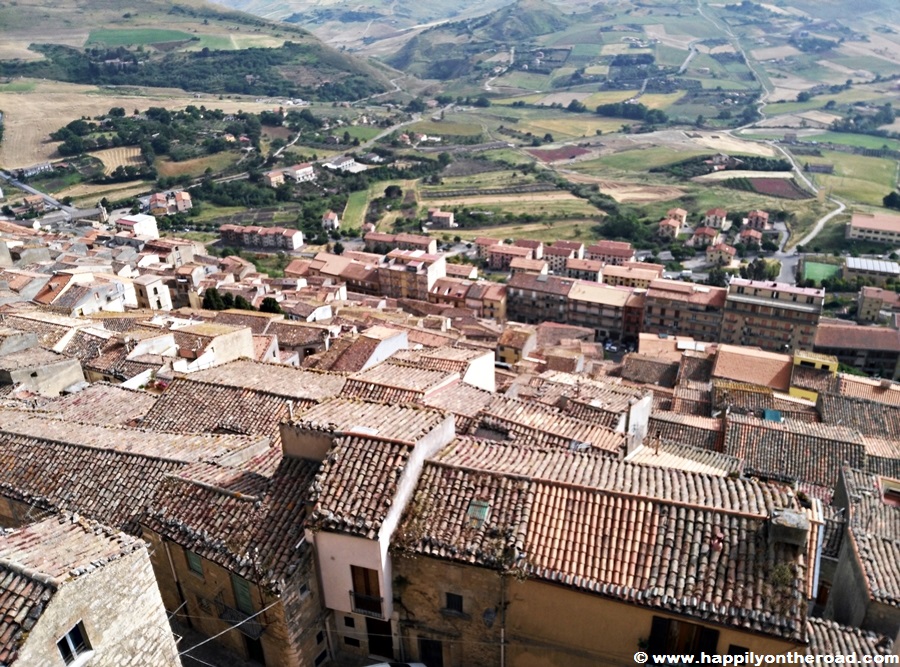 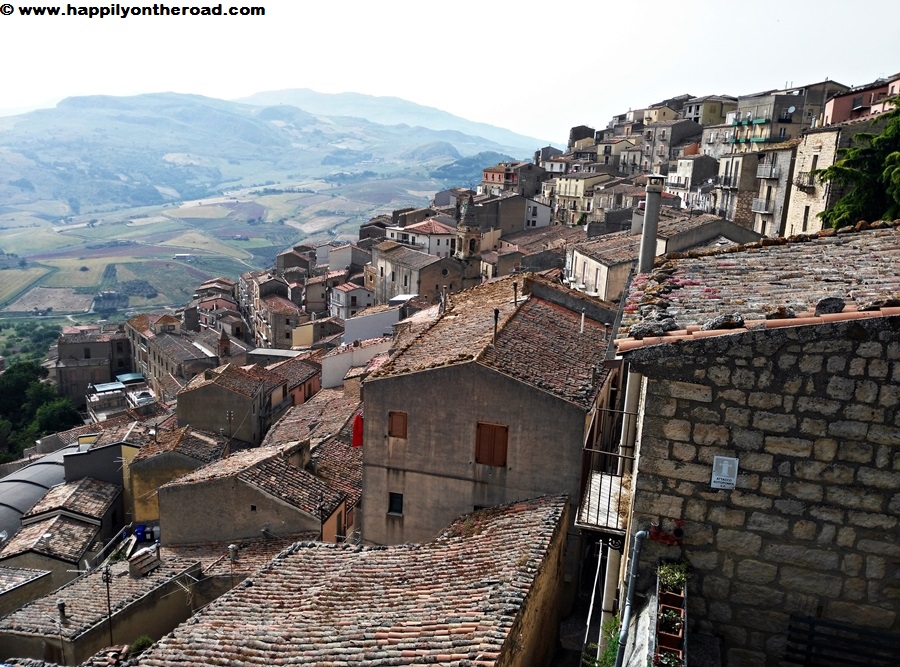 Panorama from the Gangi belvedere

In conclusion of this post, I say that these villages in the Madonie Park absolutely deserve a visit. They will make you come in contact with a different Sicily, different from what you usually find in the mass tourism places of its coasts. So, if you are planning a trip to Sicily that also includes lesser-known locations, which are as charming as the most famous ones, this is the right choice.

Click here, if you wish to read about some other destinations in Sicily.