Stonehenge and Bath: a day trip from London

As anticipated in the post on my recent trip to London, being my third time in the British capital, I decided to include a day trip from London in my itinerary. There was a wide range of options of activities to do outside London, but ultimately the choice fell on Stonehenge and Bath. I had been wanting to see Stonehenge for years and I’m glad I did it at last.

How to get to Stonehenge from London

If you are in London and want to visit the Stonehenge megalithic site, you can rely on organized tours or create one yourself.

Stonehenge is located about 13km from Salisbury, which you can easily reach by train from London Waterloo station or National Express coach. Between the two alternatives, the train is certainly the fastest, because it allows you to reach Salisbury in about an hour and a half, against the 3 hours of the coach – the speed of course has an impact on costs.

Once in Salisbury, you can choose the organized tour with the Stonehenge Tour coaches. The ticket for the Stonehenge Tour allows you to reach the megalithic site in about half an hour from Salisbury and to enjoy a hop-on / hop-off service on the route Salisbury – Stonehenge, being able in this way to visit the site of Old Sarum, one of the oldest human settlements dating back to 3,000 B.C. Of course, Salisbury is also worth a visit, especially its cathedral: it is the most famous attraction of the city, because its spire is the highest in England, inside there are one of the four original copies of the Magna Carta and the oldest working clock in the world (dating back to 1386).

Initially I was going to follow this program and I had calculated times and costs to make it happen. In the end, because of laziness and a bit tempted by the idea of visiting Bath, I opted for this organized tour.

After about two and a half hours by coach from London, I was finally at Stonehenge. The coaches, including the Stonehenge Tour, arrive at the Stonehenge Visitor Center, from where shuttles lead to the Stone Circle. I must say that already seeing the Stone Circle from afar, from inside the shuttle, was thrilling – not to mention when I found myself in front of it. They may be “four boulders thrown there in the middle of nowhere” as some visitors said, but that place is suggestive for the mysteries that still lie there. It is not explained, for example, how it was possible 5,000 years ago to transport boulders of that size and weight (the stones are about 6-7 meters high above the ground and about 3 meters below ground, and weigh between 25 and 50 tons). It is also assumed that this is an ancient astronomical observatory, since the axis of Stonehenge is aligned with the position of the sun during the summer solstice.

It is not possible to enter the Stone Circle, but you must follow a circular path that goes around the stones. The site is located in the middle of nowhere: around you’ll see just wide expanses of fields and pastures and a state road. Here are some photos taken around the Stone Circle: 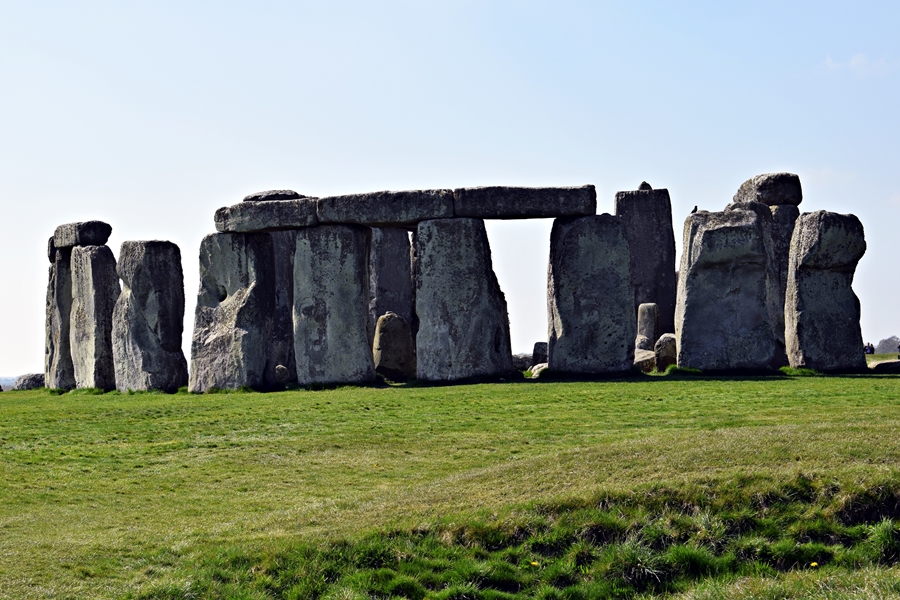 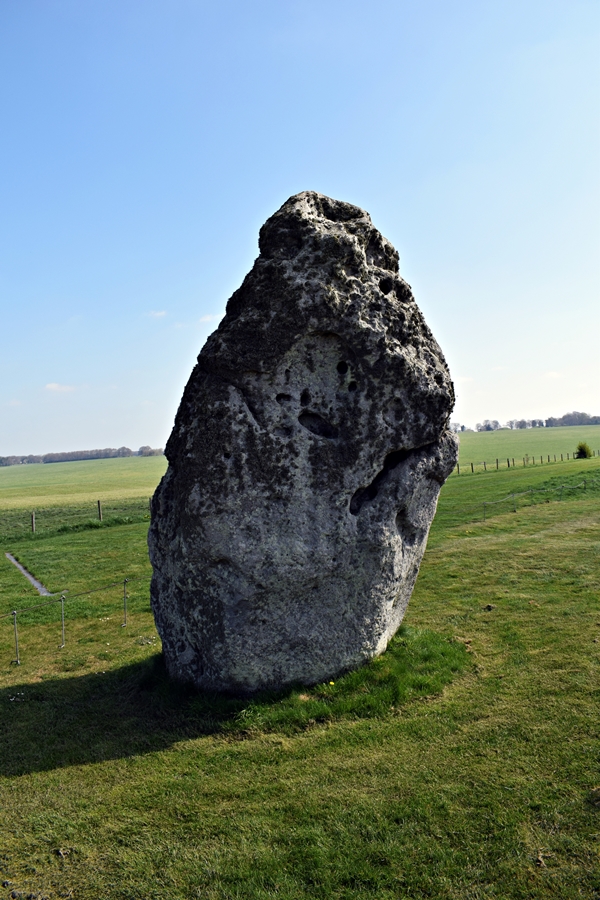 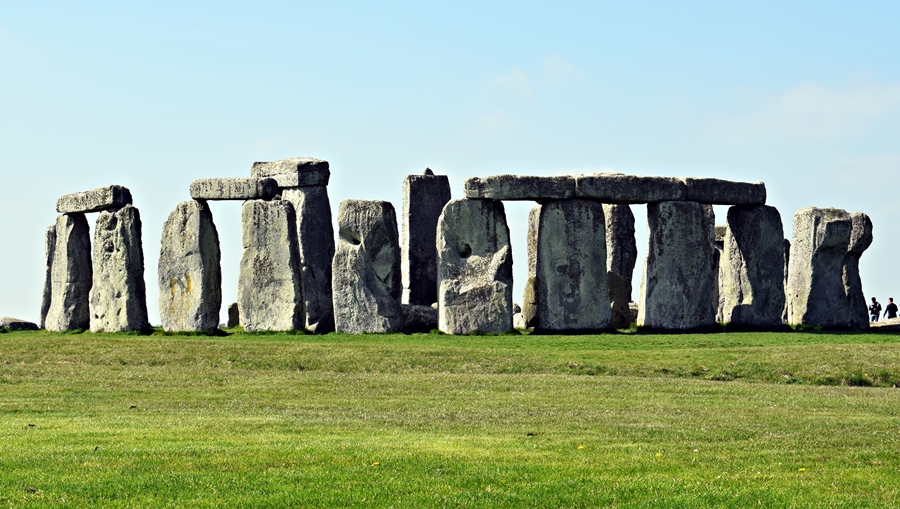 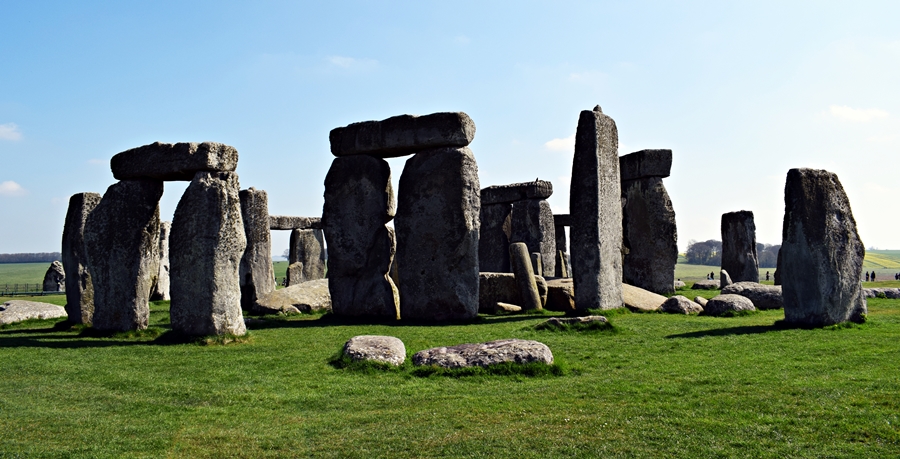 Bath is a city of ancient origins. It owes its name to the fact that there the Romans built the baths around 43 d.C., although some excavations have revealed the presence of human settlements already in the most ancient times, so much so that it is thought that the first baths were built by the Celts more than 2,500 years earlier. Its urban development began only in the XVIII century, when there was the need to create a urban fabric for visitors to the baths. This is the reason why the entire Bath old town has been designed in Georgian style.

Almost all the main attractions of the city are located close to each other. My tour started from the Roman Baths. After the entrance, you get into the upper floor of the famous courtyard of the baths, from where you can see the nearby Abbey. 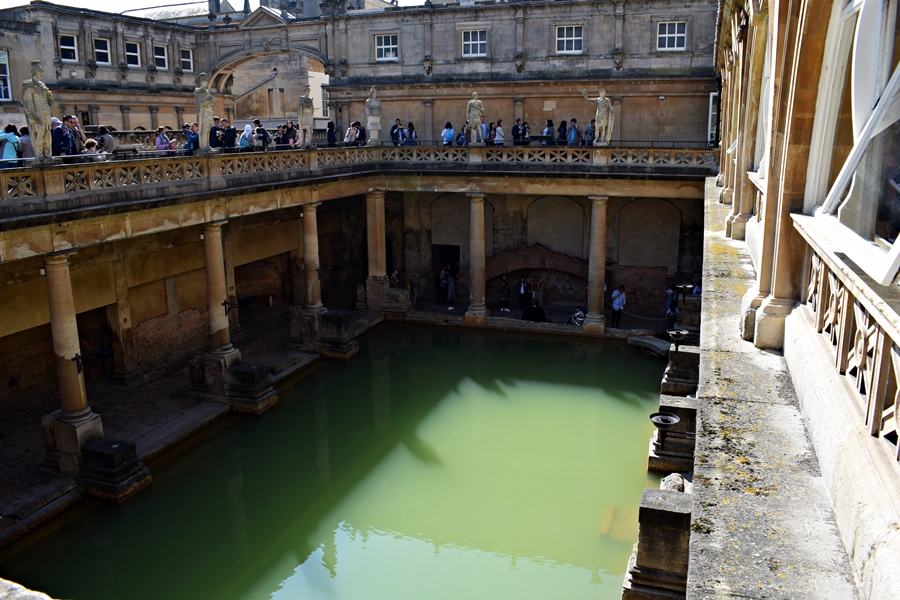 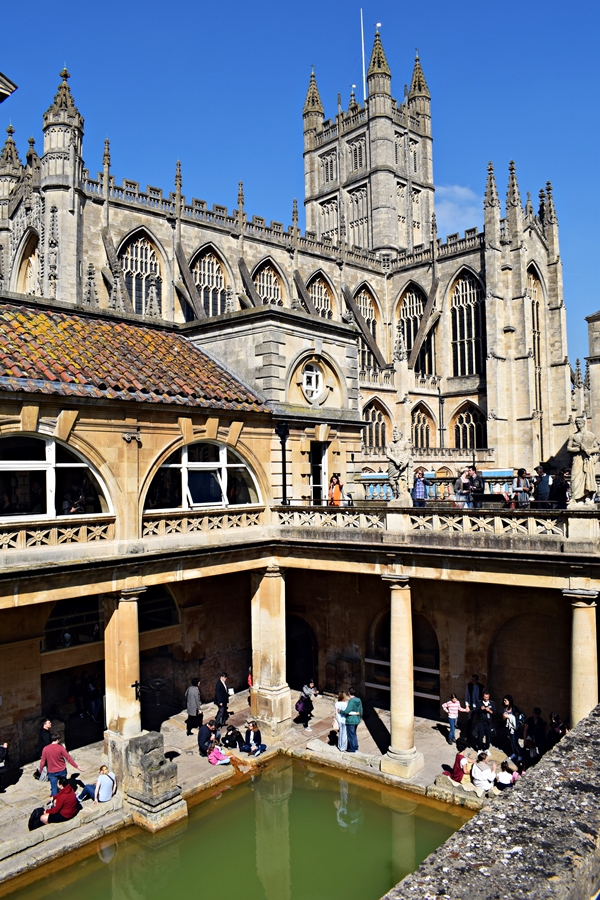 View of the Abbey from the Roman Baths

Leaning out and looking down, you can see the pool with thermal water. Actually, the water in the pool is not so clean and the staff at the entrance invites visitors not to touch it or drink it. Continuing the tour, you enter the museum of the Roman baths, which offers ancient finds and where you can see the source of the thermal water. 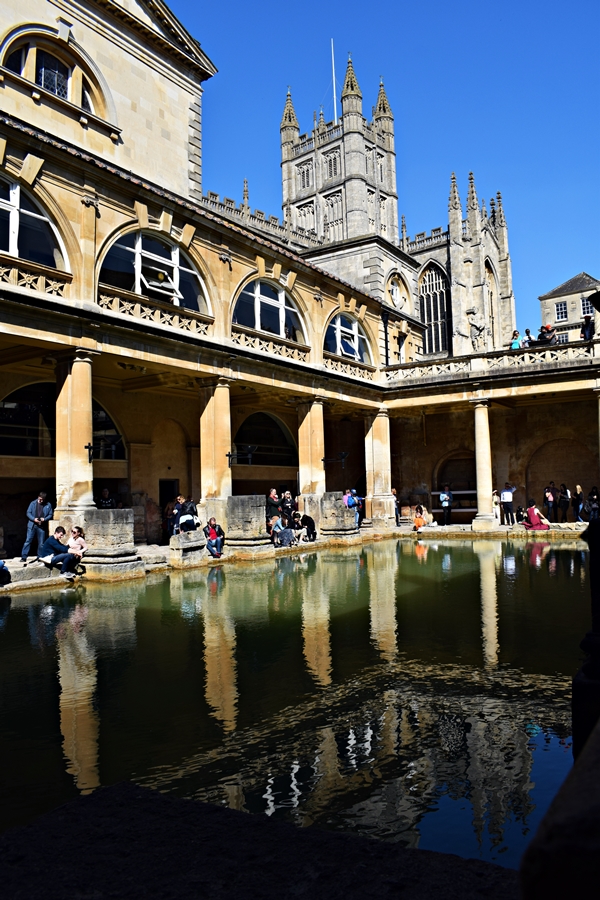 You reach the lower level of the courtyard and there you can see the pool surrounded by the colonnade, a classic Roman style courtyard. Of course, the Roman baths as we see them today are not as they were in ancient Roman times. When the Romans left England in the fifth century, the baths fell into disrepair and only in XVIII century they were retrained and began to be used again by the English aristocracy. Just in this century, Bath began its urban development. 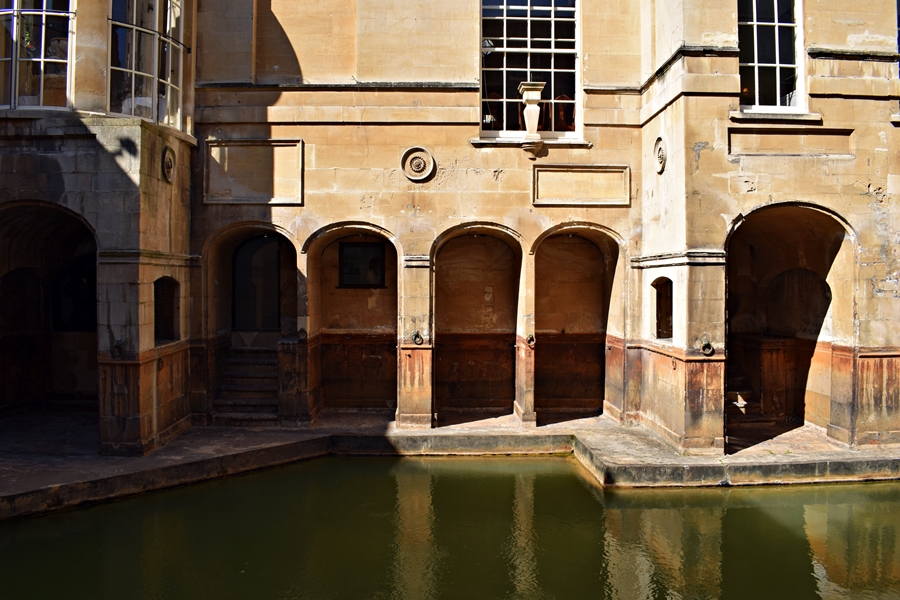 My tour of Bath continued at the Abbey. It is dedicated to Saints Peter and Paul and originally housed a Benedictine monastery. It was then rebuilt and converted into an abbey. It has a Latin cross plan and is one of the main examples of perpendicular Gothic style of the west of England. I recommend going up the abbey tower to enjoy a breathtaking view of the city of Bath. 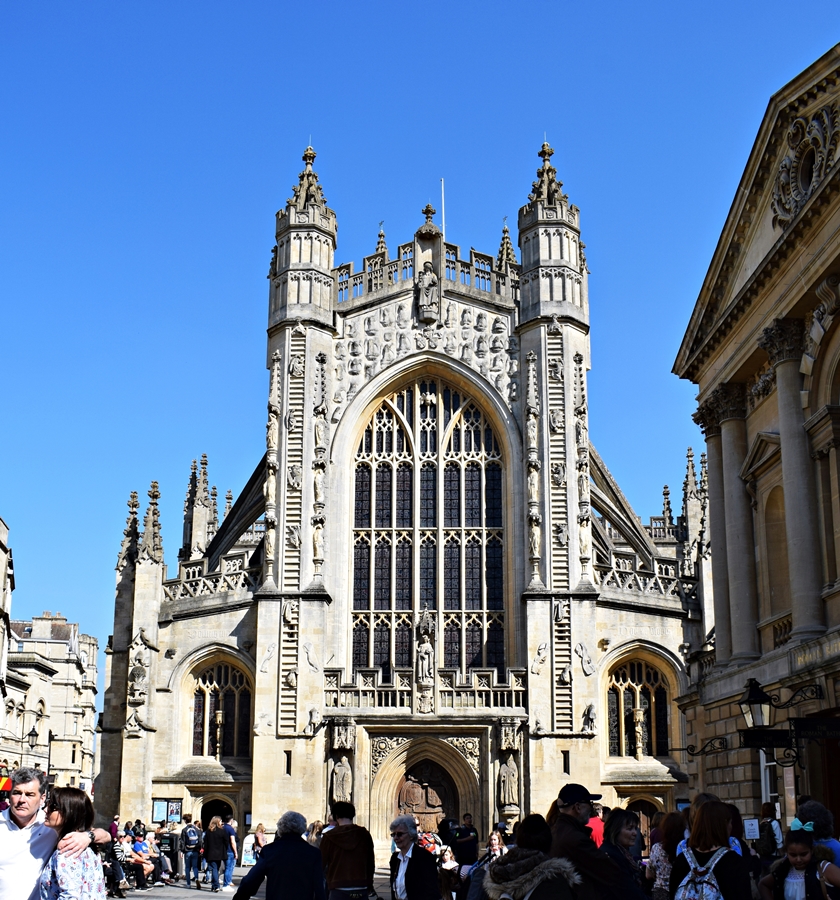 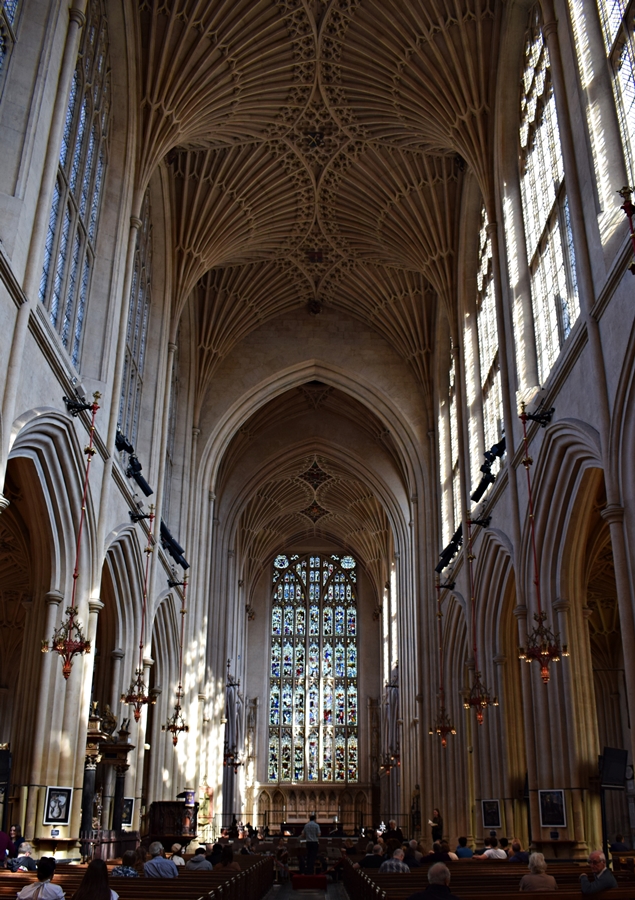 Walking through Bath old town gives the feeling of entering another era. It seems almost to return to the days of Jane Austen and the heroines of her novels. Actually I didn’t mention Jane Austen at random. Here in fact the Pride and Prejudice author lived for several years with her family, although she did not write novels in Bath. For fans of Jane Austen’s novels, in Bath stands the Jane Austen Centre, a collection that tells the years spent by the writer in Bath, right in the house where she lived with her family. Unfortunately, despite being a great admirer of Jane Austen, I didn’t have the opportunity to visit it due to lack of time. 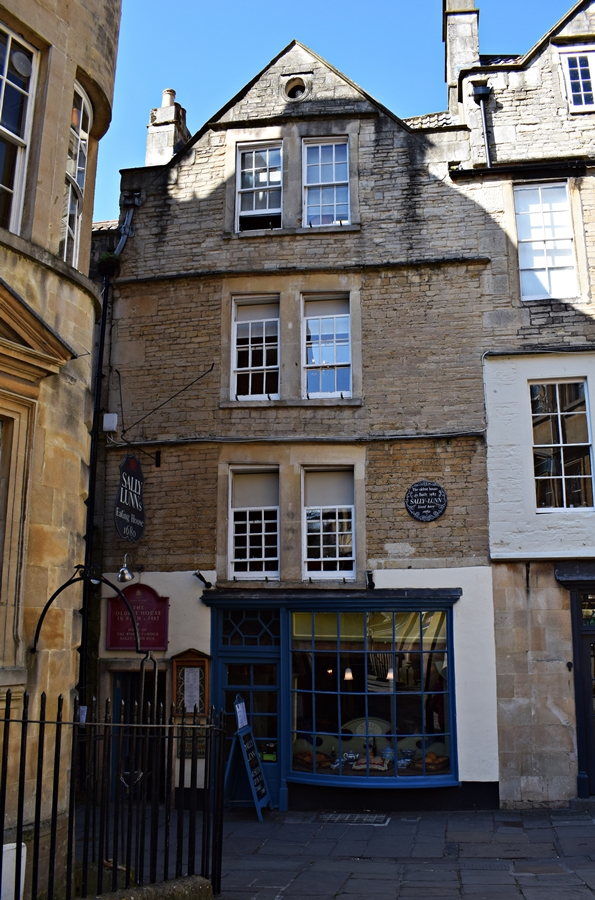 The atmosphere of Jane Austen’s novels is palpable by walking through Bath old town. Many are the tearooms you’ll meet in Bath, among which the most famous one is undoubtedly Sally Lunn’s Eating House. It is located inside the most ancient Bath building currently standing (dated 1482) and inside it is possible to taste the famous Sally Lunn bun, still prepared by hand and baked in the oven, following the original recipe.

Another must-see in Bath is Pulteney Bridge, the bridge that crosses the Avon River – it is not the Avon River of Shakespeare’s home town; in England, in fact, there are four Avon rivers. Having become one of the symbols of the city, the main feature of this bridge is the fact that it has shops on both sides… I still remember the window of a pastry shop that is right on the bridge, with lots of scones, biscuits and cakes of all kinds. 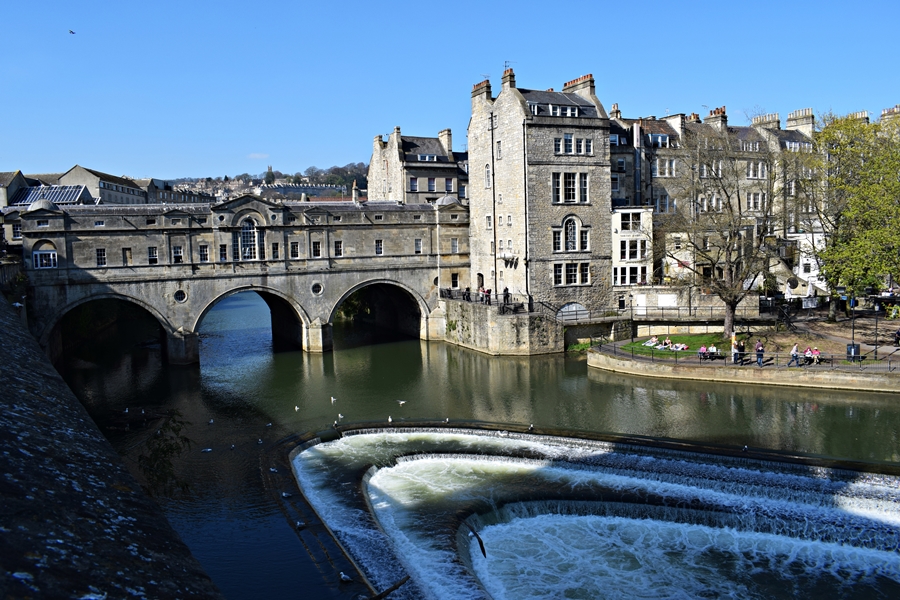 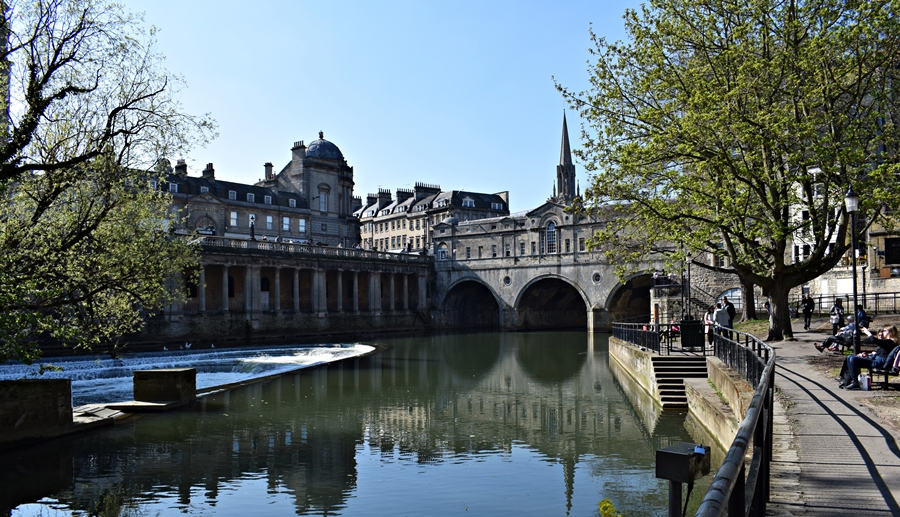 This day in the south-west of England made me want to discover this country rich in history even more. Many people don’t think about it, but England is not just London. The British capital is absolutely my favorite city and this will never be questioned, but if you want to know England, the genuine one, you have to get out of London. Now I have a dream: to take a trip to the north of England. Who knows, sooner or later I’ll do it!

Here is the video of the day in Stonehenge and Bath taken from my YouTube Channel: