As soon as you arrive in front of Hofburg Imperial Palace, you immediately realize that it extends over a large area of central Vienna.Hofburg Imperial Palace (perhaps it is more correct to call it a complex than a palace), in fact, consists of several buildings, courtyards, squares and gardens.

Hofburg Imperial Palace is the result of many changes that, from the 13th to the 20th century, brought it to its current appearance, with the completion of the Neue Burg (the new wing). It was an imperial residence until 1918 and part of it is used today as the residence of the President of the Austrian Federal Republic.

What to see at Hofburg Imperial Palace

Visiting the Hofburg Imperial Palace means entering a city in the city.It consists of 18 wings and 19 courtyards. Each wing of the complex hosts one or more museums. We find, for example, the Schatzkammer (Chamber of Imperial Treasures), the Burgkapelle (Imperial Chapel), the Spanische Hofreitschule (Spanish Riding School), the Österreichische Nationalbibliothek (Austrian National Library), the Naturhistorisches Museum (Museum of Natural History), the Kunsthistorisches Museum (Museum of Art History), the Globenmuseum (Museum of Globes), the Kaiserappartaments (Imperial Apartments), the Sisi Museum, the Silberkammer (Museum of the court silverware), the Albetina… just to name a few.

For more information on the museums at Hofburg Imperial Palace and the types of tickets, please go to the official website.

I limited myself to visiting only the Silberkammer, the Sisi Museum, the Imperial Apartments and the National Library. I regret not having visited the Schatzkammer, where, among the various treasures, imperial crowns and the nail that pierced Christ’s right hand are shown.

Entering from the Michaelerplatz Gate, you can choose to go left towards the Spanish Riding School or to the right towards the wing of the imperial apartments. The first is one of the most visited attractions in Vienna, where you can see the training of the famous Lipizzaner horses, but for a matter of time I didn’t include it in my itinerary. 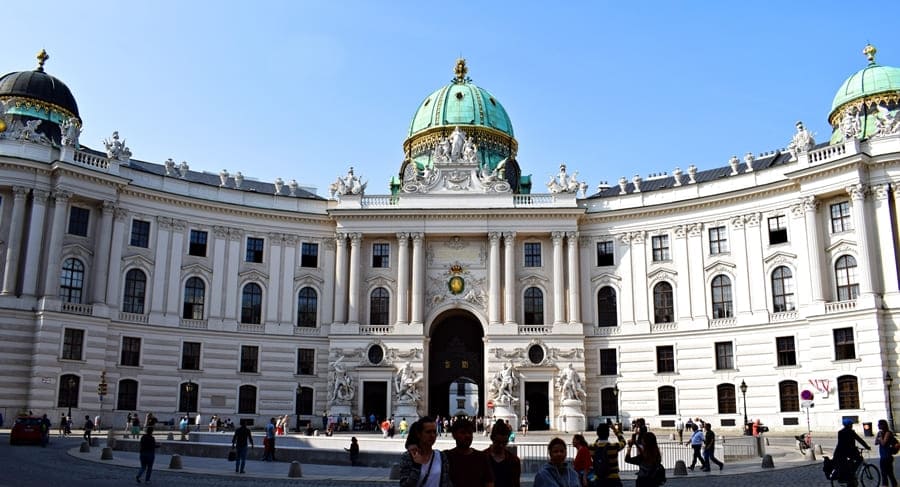 The first stop of the tour at Hofburg Imperial Palace was the Silberkammer (Museum of the court silverware). Here are preserved all the silverware and porcelain used by the imperial family, both for private meals and for public events; you’ll discover how the table had to be set on different occasions, how the napkin was to be folded: curious fact about it is that only two people in the world today know the secret of folding the napkin. 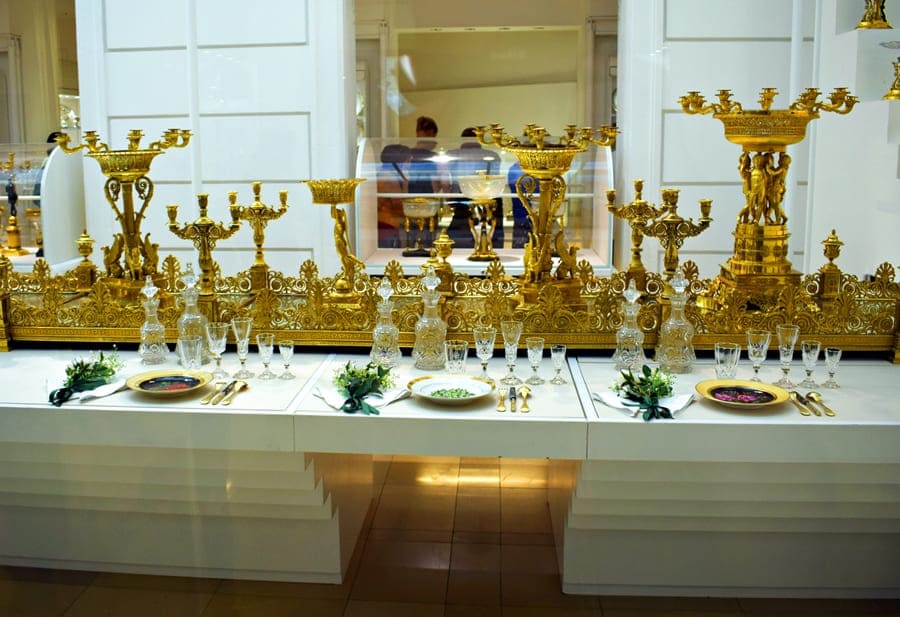 After the Silberkammer , the tour continued at the Sisi Museum, dedicated to Empress Elizabeth. The museum exhibits various objects and clothes belonged to “Princess Sisi“, with the aim of letting us know the true story of the Empress, tragically died in Geneva at the hands of an Italian anarchist.

Is the myth of Sisi true?

Walking along the path of the museum, you’ll discover that Sisi didn’t really enjoy the fame she enjoys today. Indeed, the fact that the empress was rarely staying at the Court of Vienna was frowned upon by public opinion. The newspapers didn’t talk much about her; because of the censorship they couldn’t even express the dissatisfaction with this “unparticipating Empress”. It was only after her tragic death that the “Myth of Sisi” was born, at the behest of her husband Franz Joseph, who was so in love with his beautiful wife.

The relationship between Franz Joseph and his beloved wife was not exactly as told in movies or in the animated series. Yes, Sisi fell in love with Franz Joseph when they met, but that love diminished with time after marriage, perhaps because of the role of his mother, Archduchess Sophie, who wanted to turn her daughter-in-law, little polite to the rigid court etiquette, in a woman worthy of her role. A letter was found, in which Sisi wrote how unjust it was that girls were forced to marry at an early age, and then had to carry the burden of that marriage for a lifetime.

Among the museum’s highlights are the various objects used to the care for the Empress’s long hair, the clothes worn on the eve of her wedding and during the coronation as Queen of Hungary (even though those two dresses are actually copies), the reconstruction of the car on which she used to travel (the true wagon is at the Technisches Museum Wien) and the file with which she was killed.

As it happened at Schönbrunn, visiting the imperial apartments at Hofburg allowed me to know even more closely the great historical figures who lived there. Entering Franz Joseph’s bedroom, you immediately grasp his simplicity, not very attentive to luxury; in his study, instead, you see the dedication to his position as Emperor.

Passing to the Sisi’s apartments, you find the fragile personality of the beautiful Empress, obsessed with the care of her body: she spent about three hours a day brushing her long hair, which reached the floor; she had gymnastic equipment installed in her private rooms, so that she could train daily and maintain her perfect shape (it even seems that sometimes she used to fast); she even had a massage table (which was considered outrageous with the gym equipment) and had a bathtub installed that she used every day. This maniacal care of her body was a way of reacting to the rigid court etiquette, by which he felt oppressed.

The last room of the tour in the imperial apartments is the dining room with the table set faithfully, according to the dictates of the court. 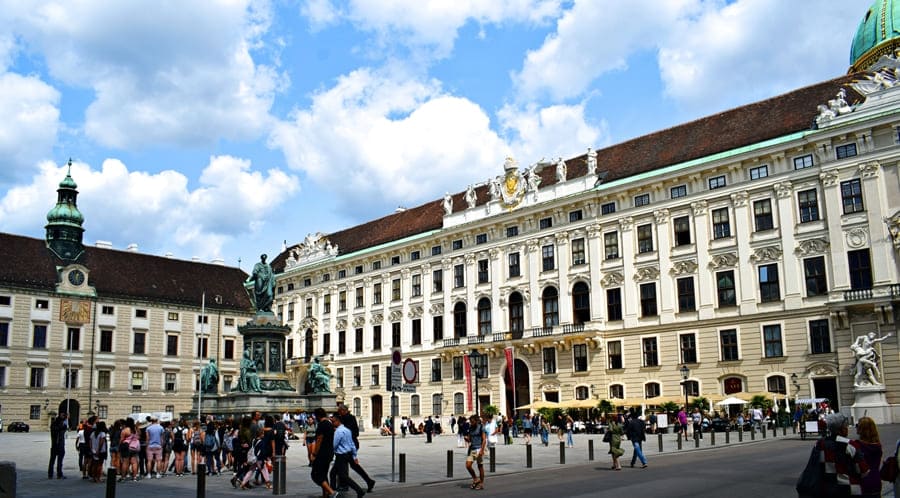 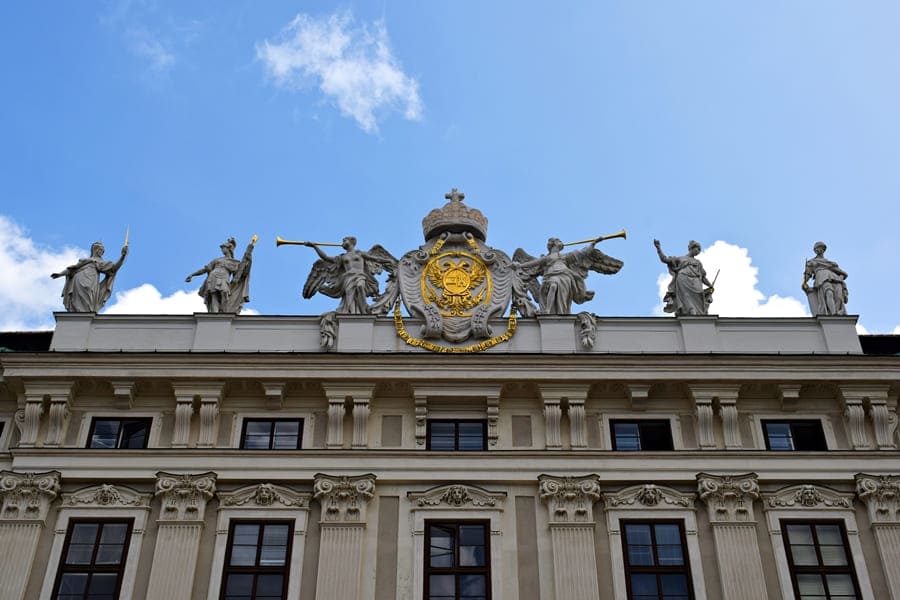 Detail of the Habsburg imperial insegna 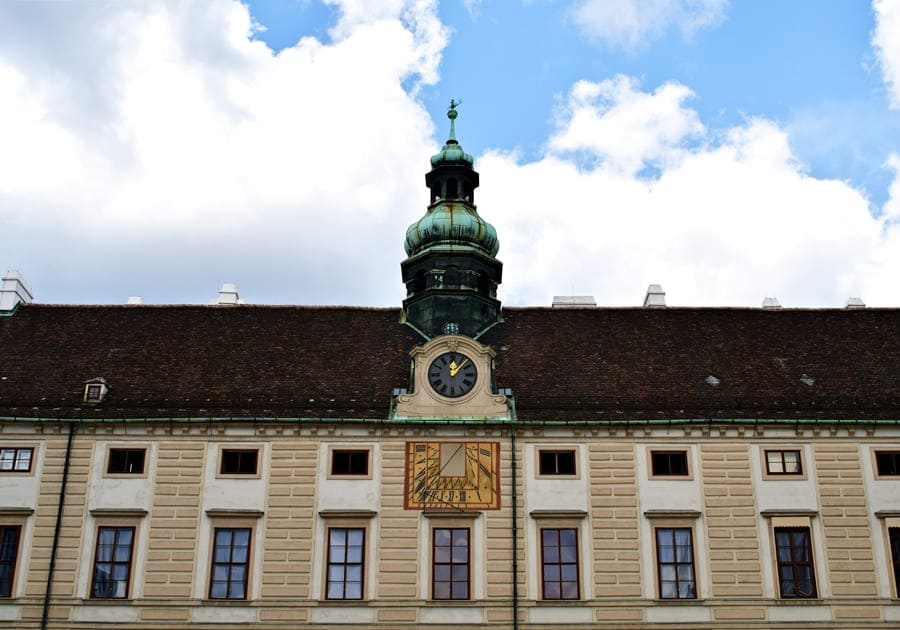 Clock with sundial in the courtyard of Hofburg 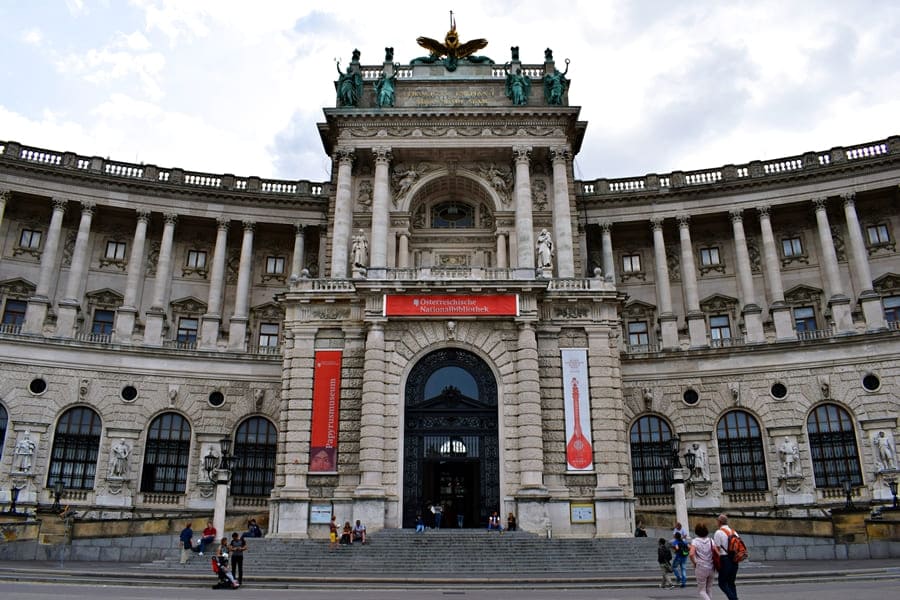 Facade of the Neue Burg in Heldenplatz

After Hofburg Imperial Palace, we headed to the Austrian National Library, but first we stopped to look at the facade of the Hofburg (Neue Burg in reality) which overlooks Heldenplatz; afterwards we reached the Library, making a small detour at the Burggarten, where we could see the Mozart Monument. 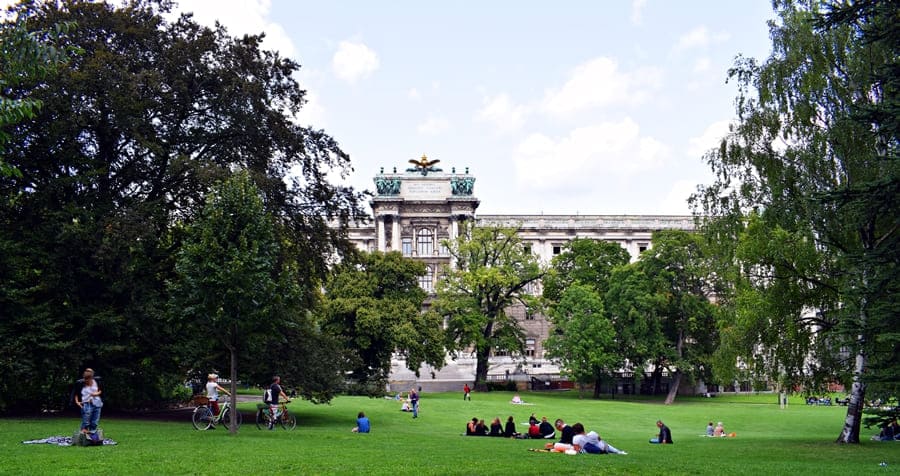 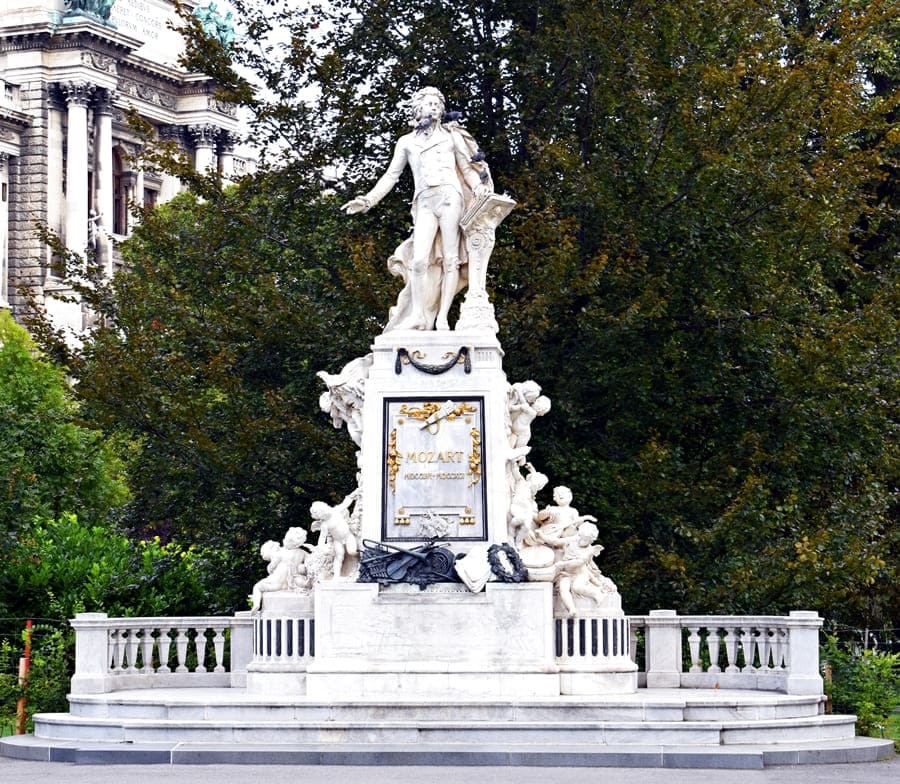 The Österreichische Nationalbibliothek, whose entrance is located in the very elegant Josefsplatz, houses in its Prunksaal the largest baroque library in the world. The State Hall is almost 80 meters long and 20 meters high, has a sumptuously frescoed dome and holds about 200,000 volumes, including the world’s largest collection of original manuscripts of the Luther’s Reformation, and some fine globes of the world. 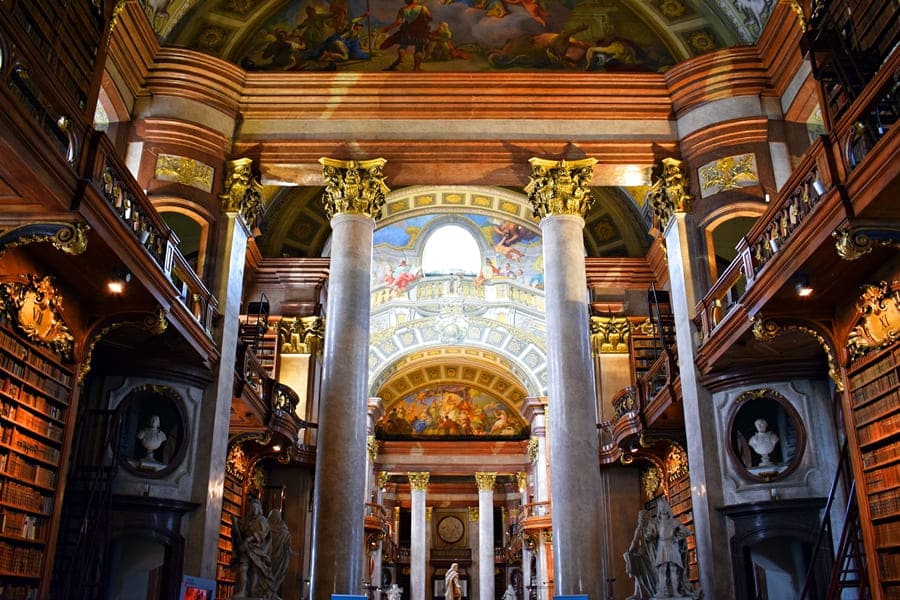 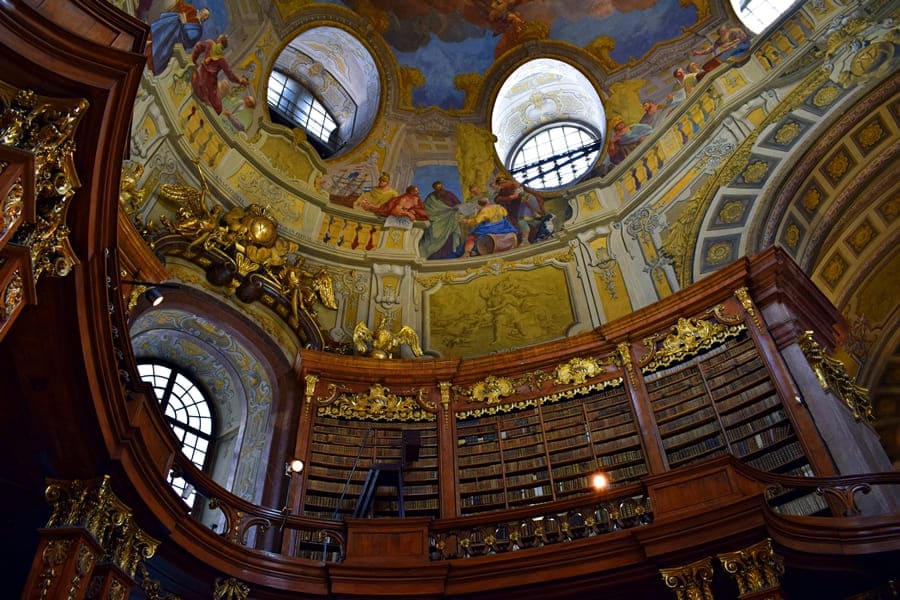 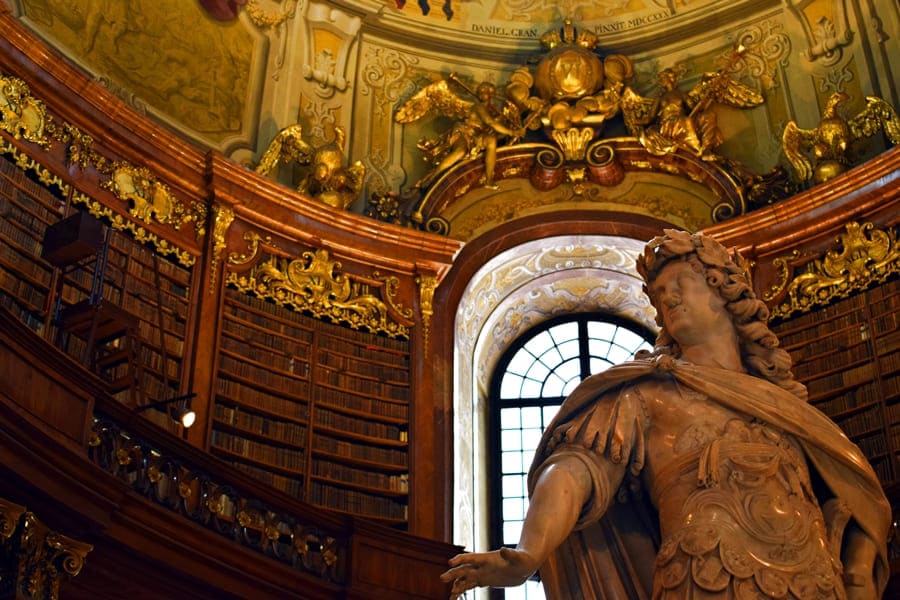 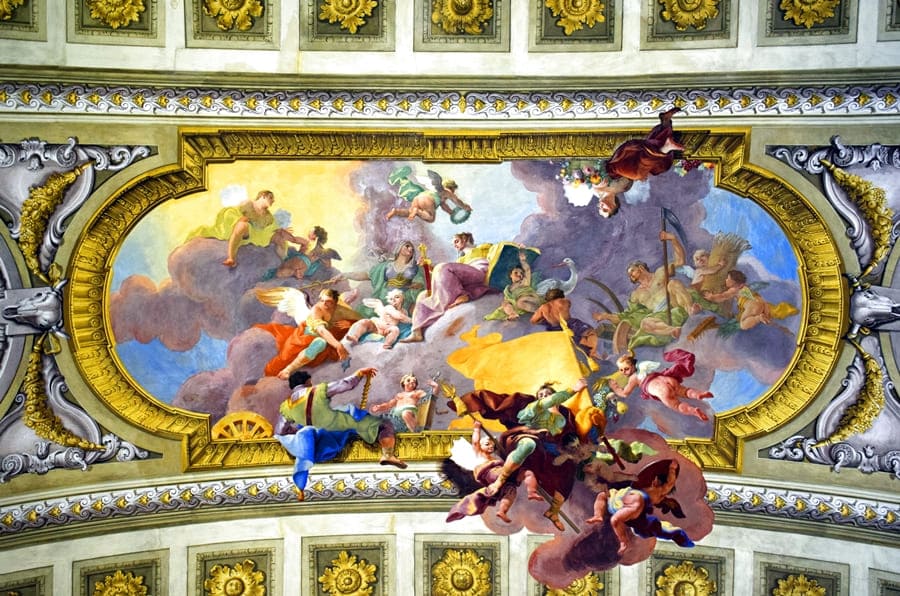 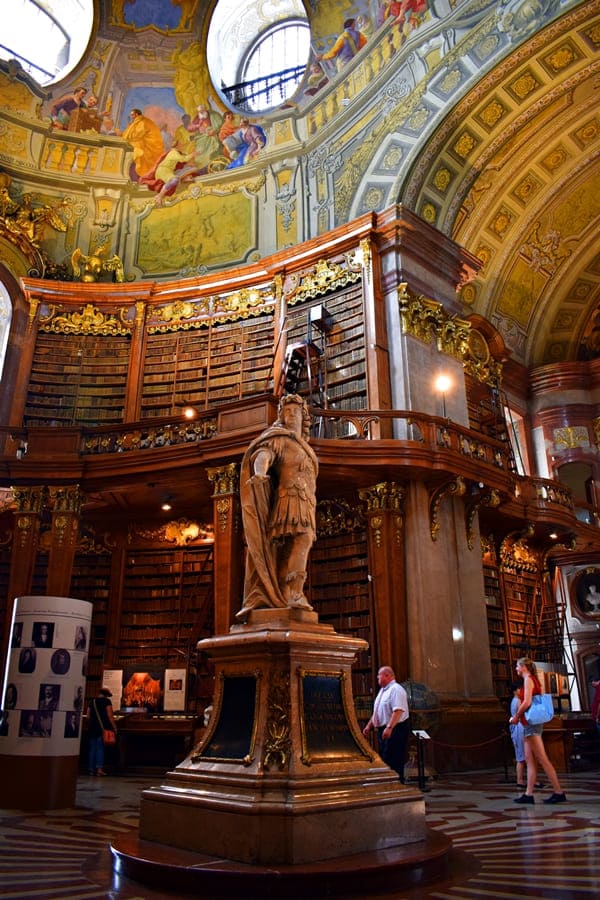 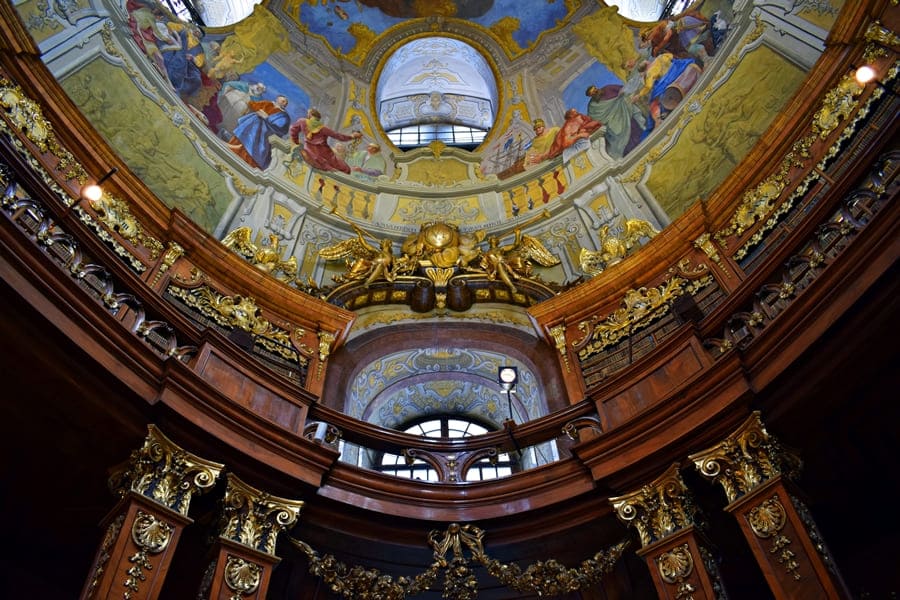 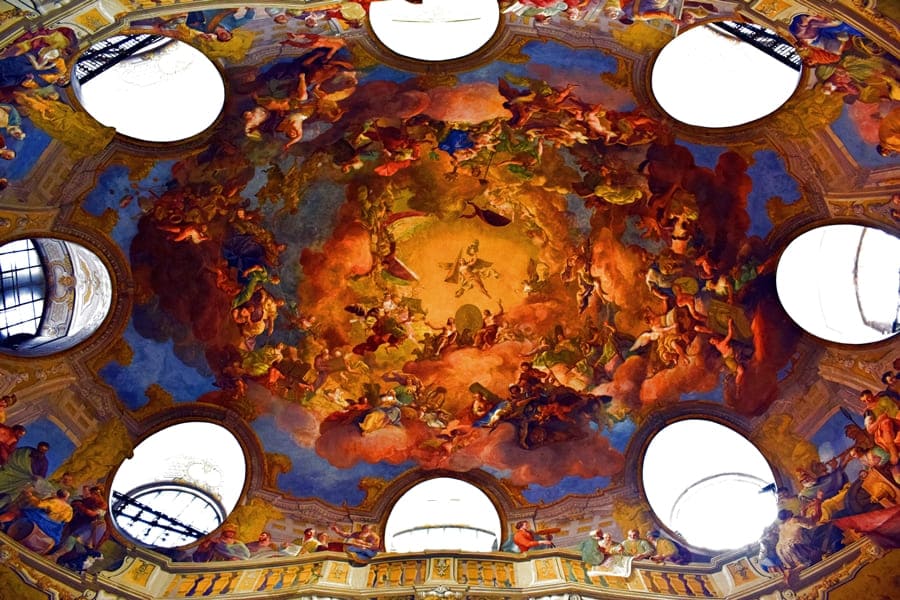 Our visit to Hofburg Imperial Palace ended with the Austrian National Library. The second half of the day was dedicated to exploring the part of the center of Vienna not visited on the first day. I’ll talk about this in the next article.
If you want to read more articles about my trip to Vienna, click here.