The second day of the trip to Vienna was dedicated to the visit of Schloß Schönbrunn (Schönbrunn Palace). In the afternoon, after visiting the Palace and its marvelous gardens, I went to the Schönbrunn Tiergarten, the oldest zoo in the world, which is part of the vast park of the palace.

The area where Schönbrunn Palace stands today was a hunting reserve of Emperor Maximilian II. There was a hunting lodge that was used by various emperors, including Matthew II, who discovered a water source he called “schöner Brunnen”, from which derives the name of the current Schönbrunn Palace. However, the hunting lodge was destroyed during the siege of the Turks in 1683.

Leopold I decided to give new life to Schönbrunn, commissioning a residence for his son Joseph, modeled on the Palace of Versailles. It was with Empress Maria Theresa that the construction work on Schönbrunn Palace was stronger. All the rococo-style decorations we can admire today date back to this period.

Schönbrunn Palace became the residence of Napoleon Bonaparte between 1805 and 1809.Emperor Franz Joseph was born there in 1830, and then died there in 1916.

The castle suffered damages due to the bombings of the Second World War, and during the war it became the headquarters of the Russian troops first and the British ones later. After the war, Schönbrunn Palace underwent a restoration work to restore its original splendor and a part of it was opened to the public in 1948.

As soon as you arrive at Schönbrunn and pass through its gate with two obelisks donated by Napoleon, you are welcomed into the Courtyard, a huge well-kept space, with two fountains: the first depicts the Danube, Inn and Enns rivers; the second, instead, the unification of Transylvania with the kingdom of Galicia. 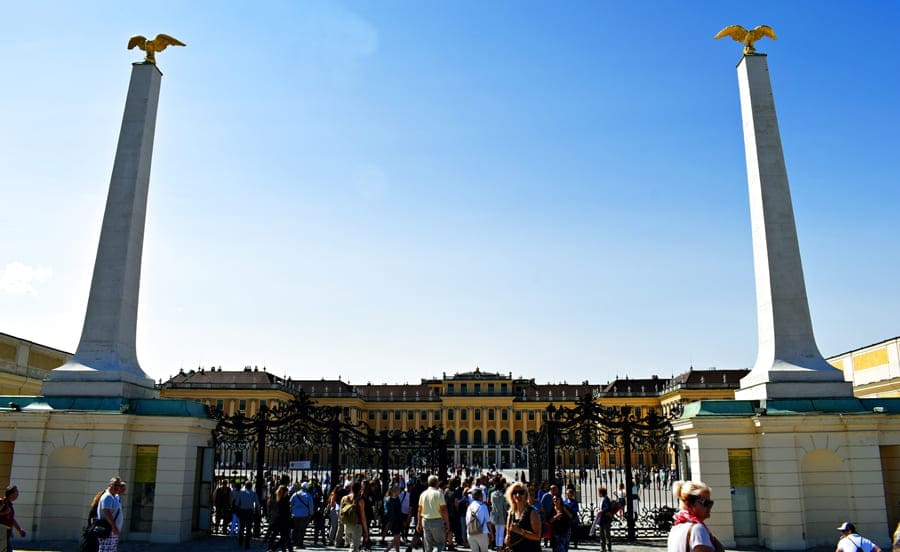 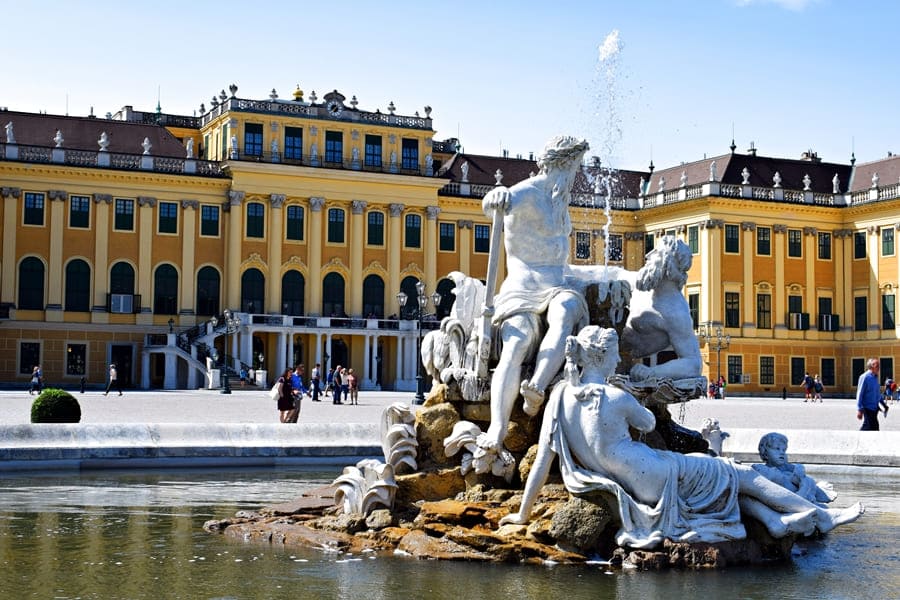 First fountain of the Courtyard

Second fountain of the Courtyard

On the right stands the Schlosstheater, the only baroque theater in Vienna and open only for the July and August concerts at Schönbrunn Palace. In front of the access gate you can admire the façade of the palace, with its double staircase.

The interior of Schönbrunn Palace

Schönbrunn Palace has 1441 rooms, but only forty of them are open to the public. Inside it is strictly forbidden to take photographs and record videos, so I have nothing to show you. The rooms are well supervised by the staff, so if you try to take photos, it is easy to be caught.

Although without images, I’ll try to describe briefly what awaits you inside. The rooms that can be visited are mainly part of the imperial apartments. In particular, the eastern area of ​​the first floor is occupied by the apartments once inhabited by Empress Maria Theresa, characterized by a very rich baroque and rococo style, typical of that period; while in the western area, we find the apartments where Emperor Franz Joseph and his wife Elisabeth lived.

The two areas of the building are made in different styles, which reflect the personality of the emperors who lived there. Maria Theresa’s apartments, as stated above, are in sumptuous rococo style, while Franz Joseph’s ones are much simpler both in decoration and furnishings, reflecting his more spartan and less attentive to luxury lifestyle.

Walking through those rooms makes you know the lifestyle of great characters, about whom we only read in history books at school, entering their daily life.

For example, you will discover that each member of the Habsburg family actively participated in the decoration of the palace halls, because everyone in the family had to learn a job from an early age. You will discover that Maria Theresa, despite the greatness of her role as an empress, loved her consort Francis I and each of their 16 children.

You will know a woman with a strong temper, who could put aside her motherly love when it came to the raison d’etat, for example by arranging the marriage of each of her daughters to establish political alliances, even when they might not agree with her choices.

You will breathe atmospheres of yesteryear, between dances and meetings of representation, and each of those environments served to underline the greatness of the Habsburg family. You will get into the Hall of Mirrors, where a 6-year-old prodigy child named Wolfgang Amadeus Mozart played for Empress Maria Theresa, and then embraced her at the end of his performance, even going against the strict court protocol.

You will get into the Great Gallery, the central hall of Schönbrunn Palace, where balls and court parties were held. A very opulent hall, with white walls, gilded stuccos in rococo style and a frescoed ceiling, which depicts the greatness of the reign of Maria Theresa.

The apartments of Emperor Franz Joseph

Franz Joseph’s apartments are quite different, starting from the Billiard Room, where the ministers and the highest offices entertained waiting to be received by the emperor.

Passing through Franz Joseph’s bedroom, you will see the very simple bed on which he slept (and died in 1916), just as simple were the furnishings of his room; you will know a man dedicated to his position as Emperor, who got up in the morning before dawn and took care of his matters until late evening.

You will become acquainted with the daily habits of her consort Elizabeth, discovering a person slightly different from how she was told in the movies; she was a person very attentive to his physical appearance, who spent several hours of the day taking care of her long hair and she even had a real gym installed in one of her rooms (in the Imperial Palace of Hofburg), where she trained daily to keep her perfect shape. 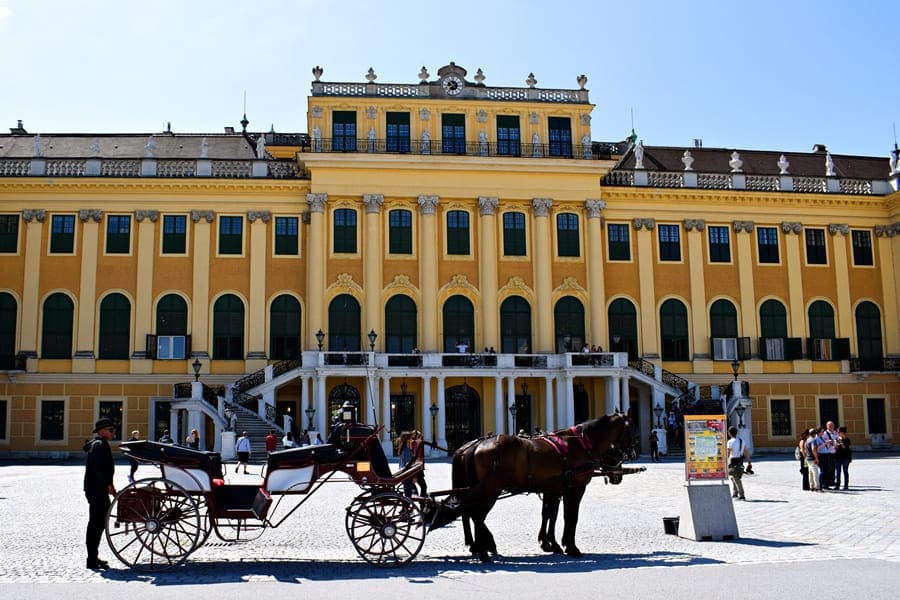 Carriage in front of Schönbrunn Palace. You can have a tour of the park on one of them.

Schönbrunn Park, as we see it today, was built during the empire of Maria Theresa, who wanted a French baroque garden for her summer residence. As for the interiors, she personally supervised the design and construction of the park. Her consort Francis I did it as well, setting up a zoo inside the park and giving life to the oldest zoo in the world, and a Dutch-style botanical garden, being a great botany enthusiast.

After her husband’s death, Maria Theresa commissioned the Gloriette at the end of the park, which was built in the same years as the Fountain of Neptune. Joseph II ordered the imperial gardens of Schönbrunn to be open to the public, making Schönbrunn Palace a place of aggregation of the Viennese population.

What to see in the park? Well, first of all the Grande Parterre, a vast courtyard with flowerbeds rich in colorful flowers, surrounded by trees, tall hedges and 32 statues inspired by the Greek and Roman times.

About halfway up the Gran Parterre on the right (having the building behind you) there is the labyrinth. In reality there are two labirinths: the first is the “classic” one, a reconstruction of the original 18th-century labyrinth, while the second one, the “new” one, is bigger and allows you to play different games.

Returning to the Grande Parterre, at the bottom you’ll see the Neptunbrunnen (Fountain of Neptune). Behind it stands a small hill, on whose summit stands the Gloriette, from which you can enjoy a beautiful view over the park, Schönbrunn Palace and even over Vienna. 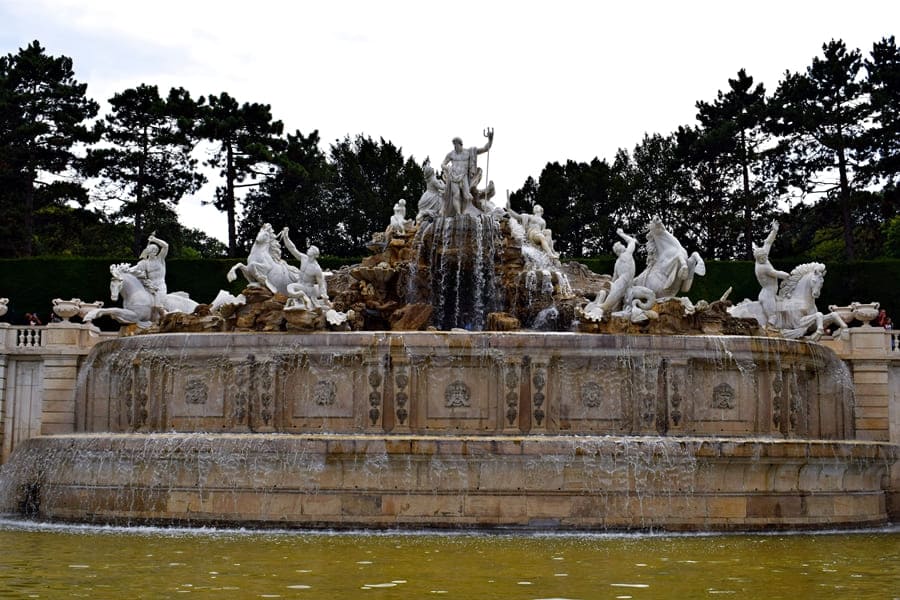 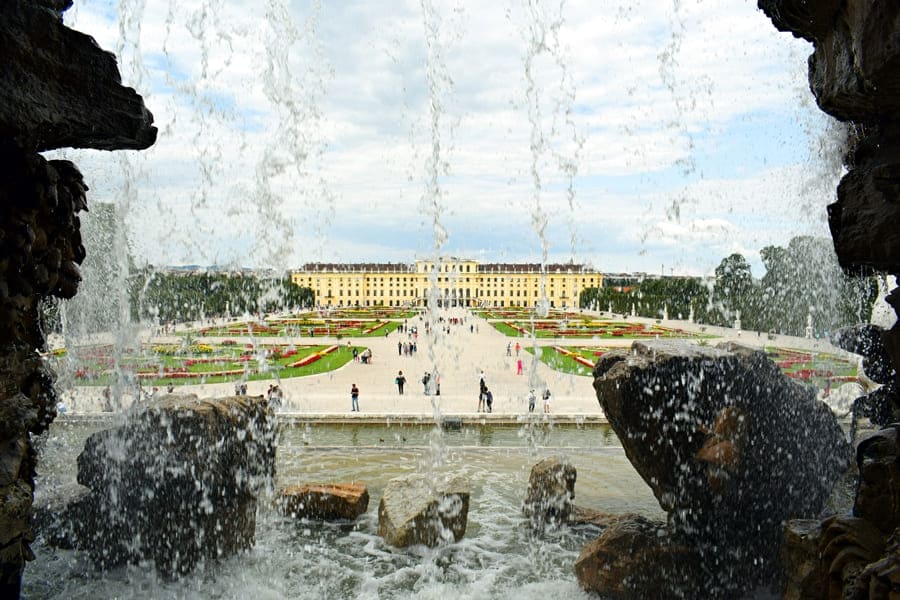 Schönbrunn Palace seen through the Neptunbrunnen 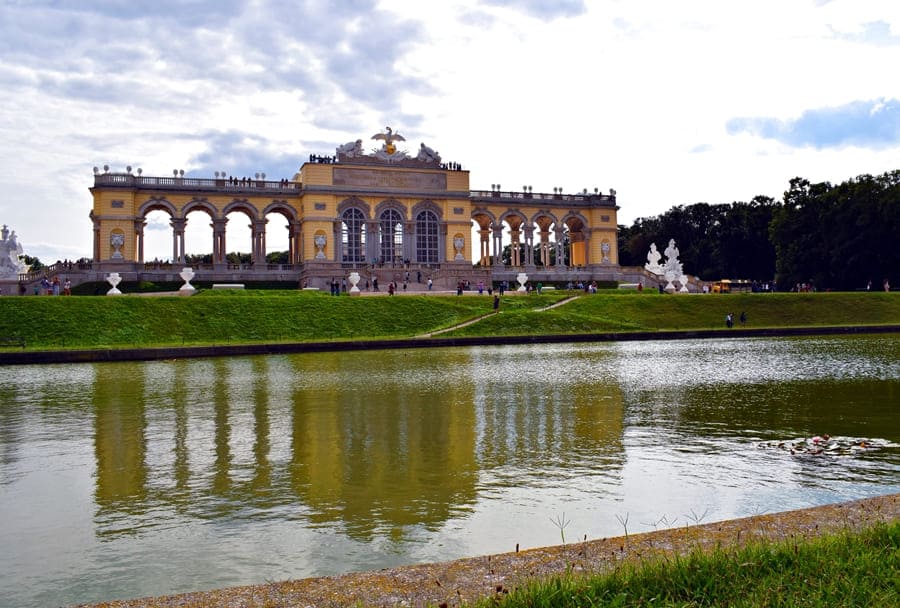 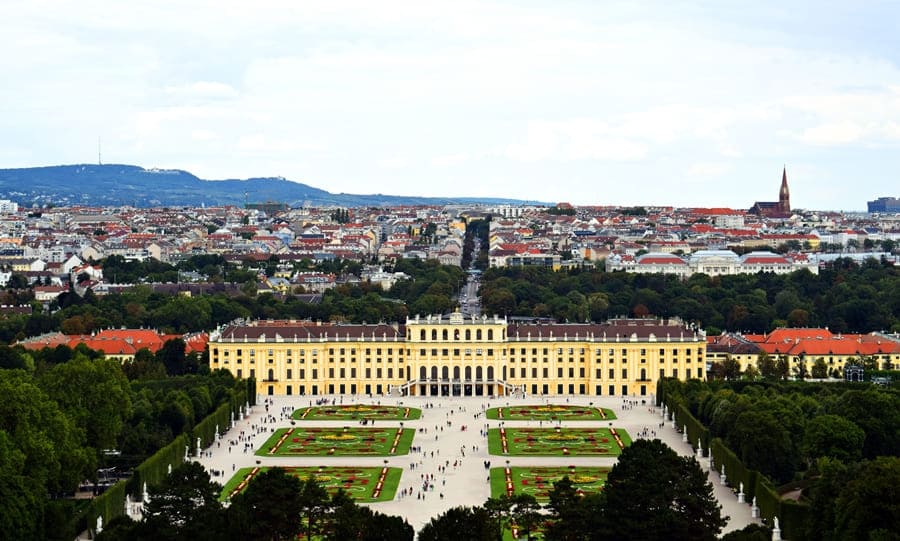 Schönbrunn Palace seen from the Gloriette

Other things to see in the park are the Roman Ruins (actually they are fake ruins, a 18th-century construction indicating the link with the ancient Roman Empire), the Fountain of the Obelisk, the Fair Spring (the Schöner Brunnen from which the name Schönbrunn derives), the palm greenhouse, other small gardens (such as the Garden of the Crown Prince), the Schönbrunn Tiergarten (Schönbrunn Zoo). 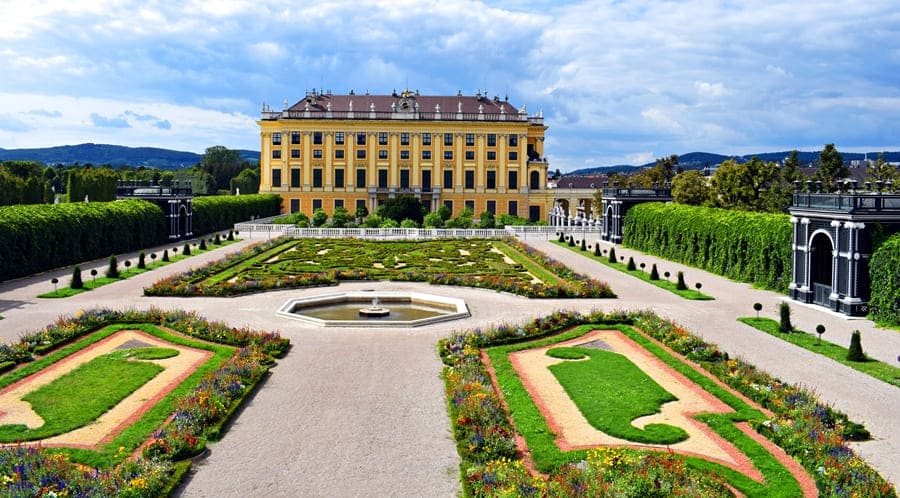 After a busy day at Schönbrunn Palace, I spent the last part of the afternoon at the Schönbrunn Tiergarten, the Vienna Zoo. As anticipated, it was wanted by the husband of Empress Maria Theresa, Francis I, and is the oldest zoological park in the world.

It boasts several primates: in 1906 the first captive elephant was born in the world, in 2007 the first panda pup came to light, followed by two other births; another world record was the birth of two giant panda twins, Fu Feng and Fu Ban, who became the mascots of the zoological park. 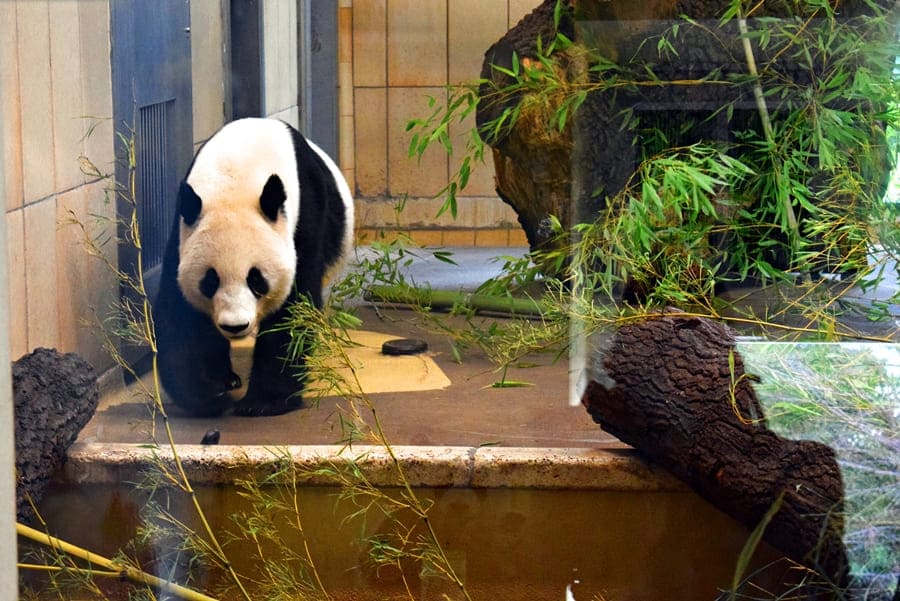 Apart from the giant pandas, at Schönbrunn Zoo you can admire many animal species, including polar bears (which however remained hidden in their lair when I passed), a red panda, the very nice lemurs, koalas, giraffes, etc. 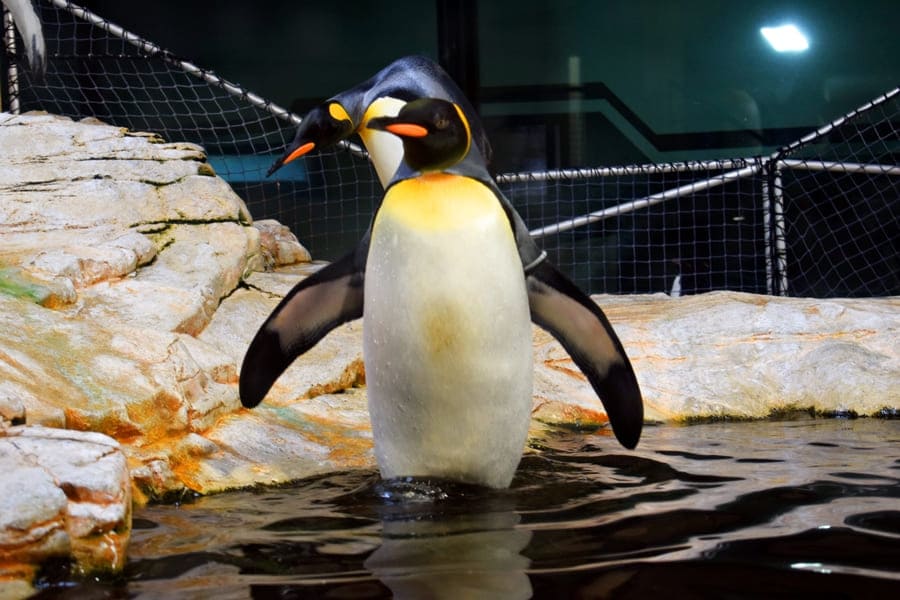 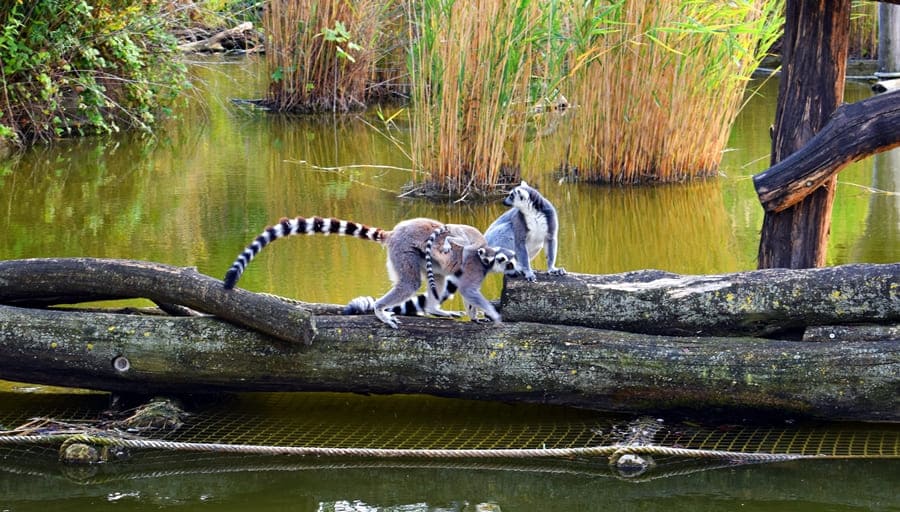 Some information about the visit

Schönbrunn Palace is perhaps one of the most decentralized attractions in Vienna. It is located in fact in Hietzig, in the western suburbs of the Austrian capital. Nevertheless, it is easily reachable by underground, taking the U4 line to Schönbrunn station.

Schönbrunn was listed as a UNESCO World Heritage Site in 1996 and is one of Austria’s most visited attractions, with around 1.5 million visitors to the palace and even 5.2 million for the park a year. For this reason, I recommend going early in the morning (the opening is at 8 am), so as not to find long queues at the ticket office. There are different types of tickets (even cumulative), depending on what you want to visit. If you want to see all the types and costs of tickets, please refer to the official website of Schönbrunn Palace.

As for the zoo, you can choose to buy a combined ticket Schönbrunn Tiergarten + Wiener Riesenrad (the famous Ferris wheel of the Prater Park). In this way you can save a few euros compared to the separate purchase of the two tickets. If you are not interested in the Ferris wheel, you can buy a ticket for the zoo, taking advantage of the Vienna City Card discount.

If you want to read more articles about my trip to Vienna, click here.

Here is a video of the trip day at Schönbrunn Palace from my YouTube channel: