After a day in Bratislava, here we are again in Vienna. The fourth day in the Austrian capital was dedicated to the visit of the Belvedere Palace in the morning and a relaxing afternoon at Prater park. 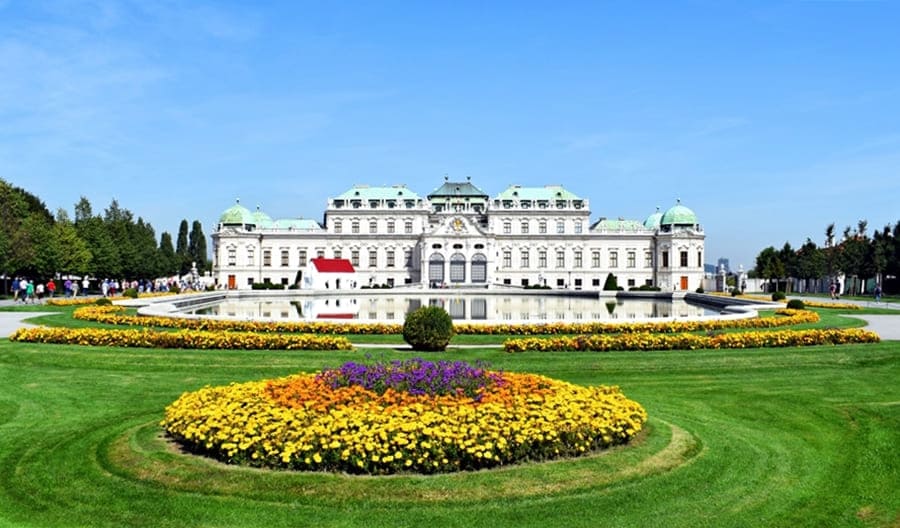 The history of the Belvedere Palace

Eugene of Savoy died without heirs and Emperor Charles VI decided the Belvedere Palace had to be inherited by the prince’s niece, Victoria. The princess moved into the palace a few months later and lived there for a few years. After divorcing from her husband, she returned to Turin, expressing to the Vienna court her desire to get rid of the palace inherited from her uncle.

Charles VI’s daughter, Maria Theresa, wanted to buy the Belvedere Palace. In those years, the building was not used as a dwelling, but rather as the headquarters of the Gemäldegalerie (Imperial Art Gallery), which until then had been kept at the Hofburg Imperial Palace. The Gallery opened to the public in 1781, becoming one of the first public museums of the world. Some years later, the collection was definitively transferred to the Kunsthistorisches Museum. 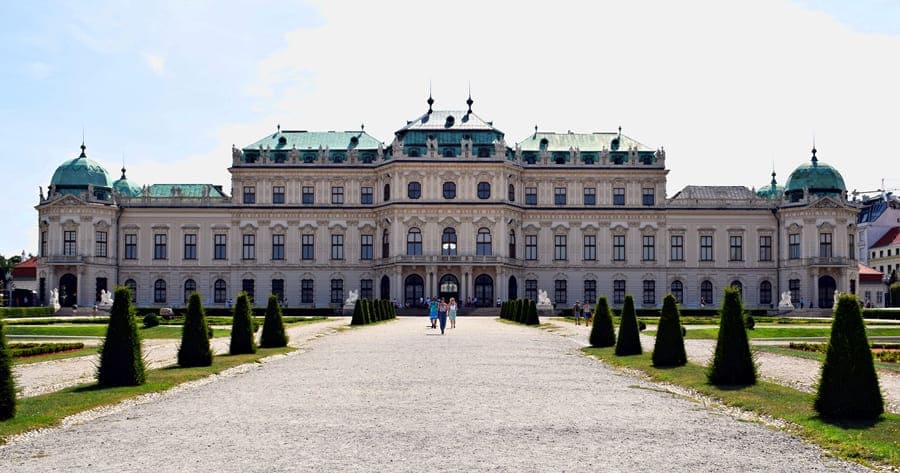 The Belvedere Palace ceased to be a museum and Emperor Franz Joseph decided that the Upper Belvedere had to become the residence of the heir to the throne. The Lower Belvedere was instead used as a gallery of modern art, welcoming the works of a new current of artists, the Vienna Secession.

After the Second World War and the restoration work due to the heavy damages suffered during the bombings, the Belvedere Palace became defenitely a modern art gallery.

What to see at the Belvedere Palace in Vienna

The two buildings of the Belvedere complex house the Österreichische Galerie Belvedere, an Austrian art collection from the Middle Ages to the present day, with works also by foreign artists. 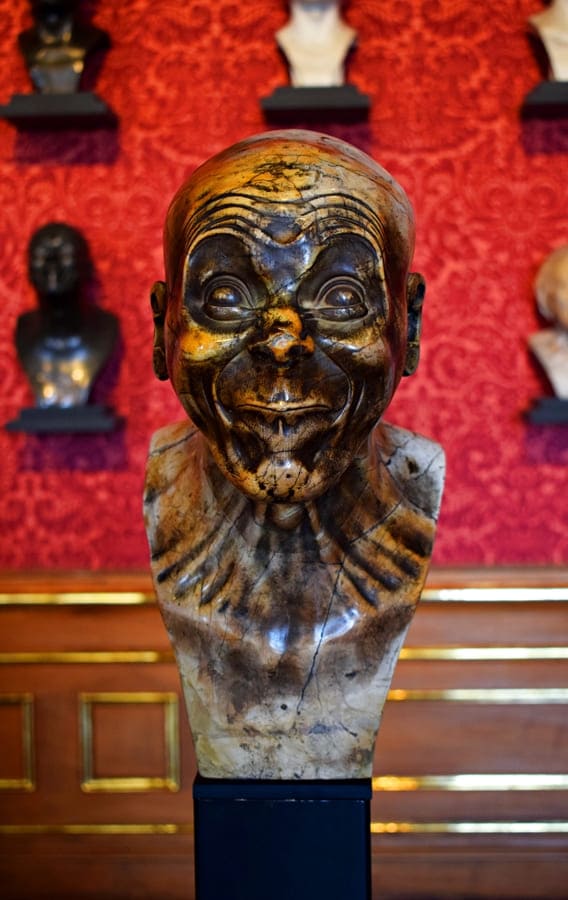 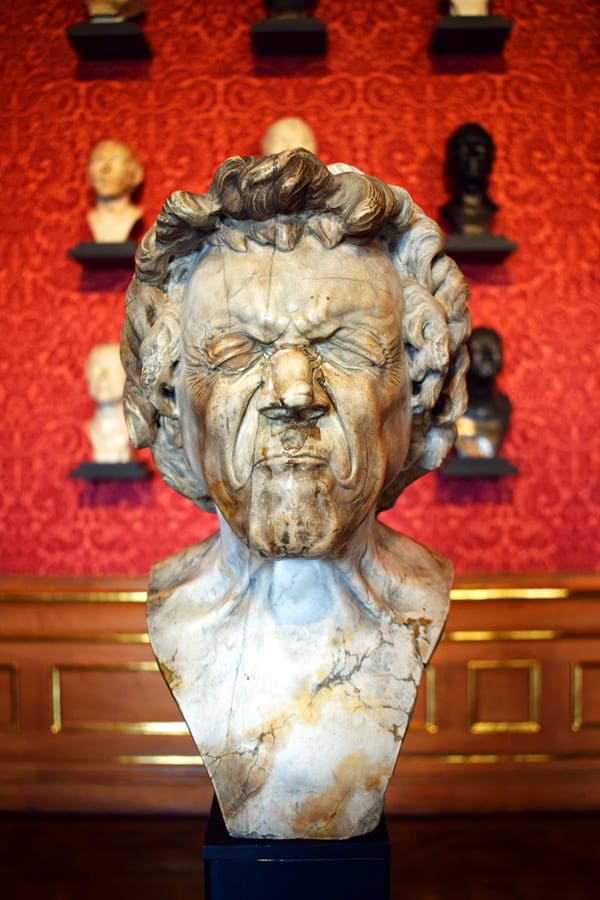 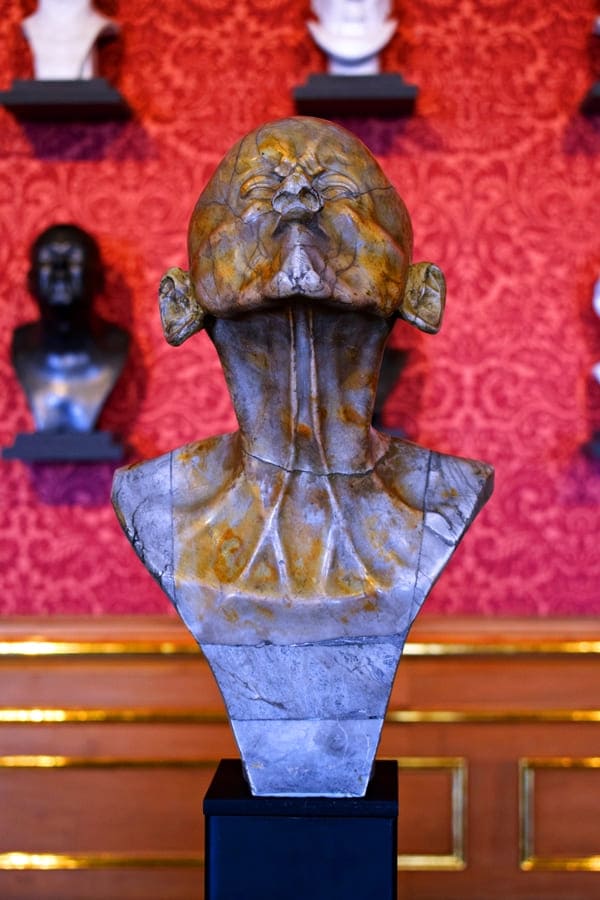 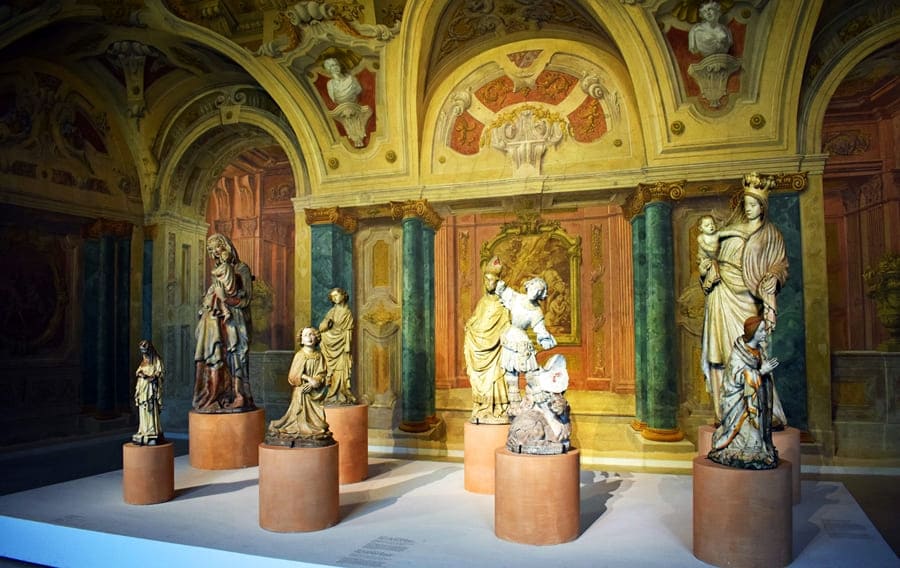 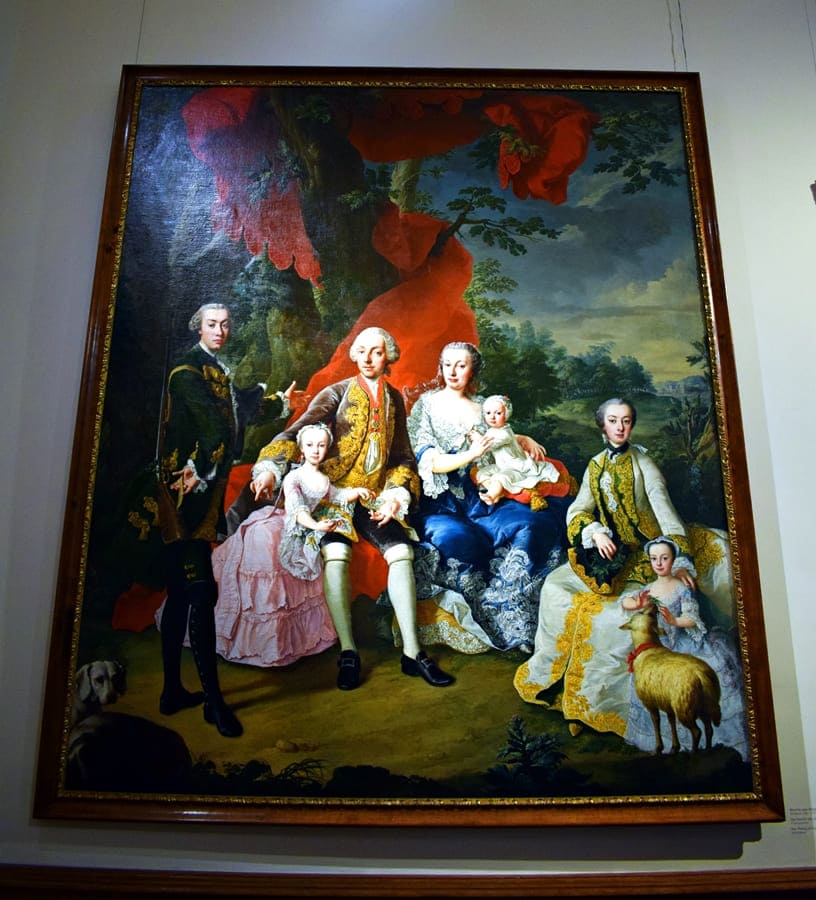 Portrait of Empress Maria Theresa with her family 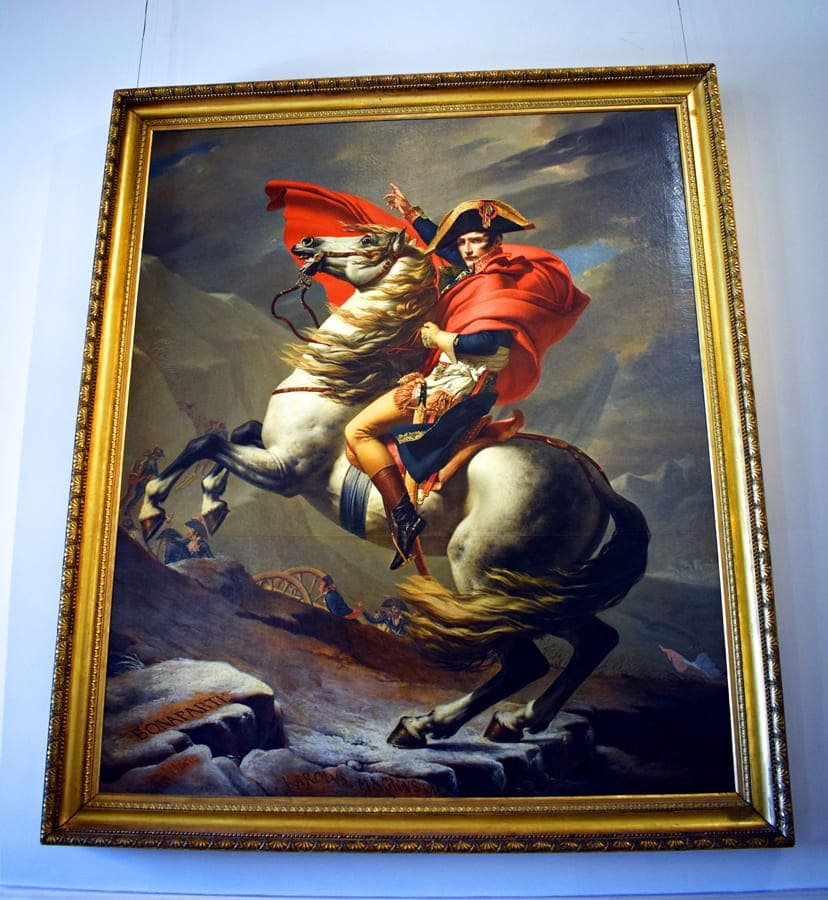 In addition to the art collection, it is possible to visit some representative rooms, such as the Marmorsaal (Marble Hall), frescoed by Carlo Carloni. 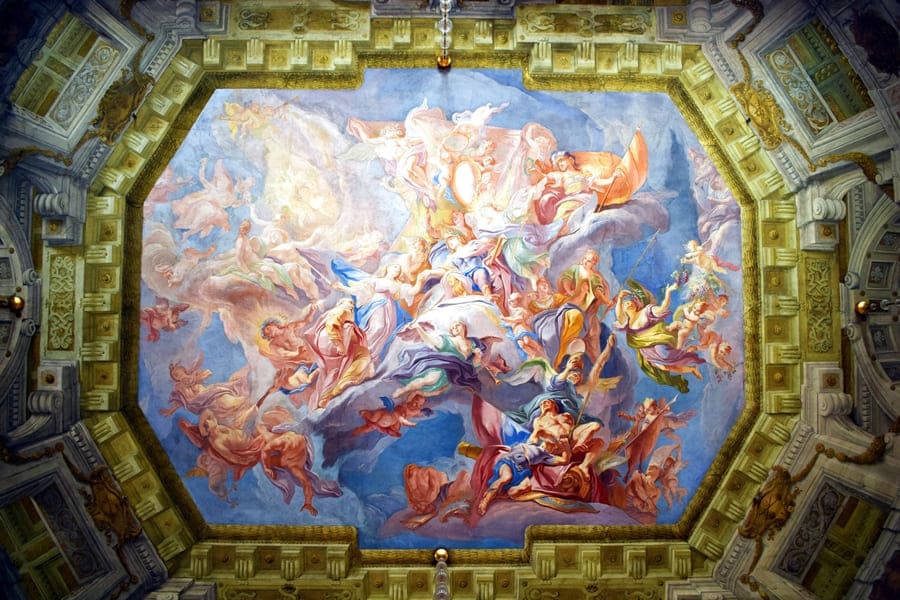 The main attractions of the art gallery are undoubtedly the works by Gustav Klimt: the Belvedere Palace, in fact, houses the largest collection of the most famous Austrian artist in the world. The most important works are surely the Kiss and Judith. If you want to take a photo of them, you will have to wait a little, because everyone wants to take a selfie with the Kiss, even if there is a copy of the it in the next room just for this purpose. 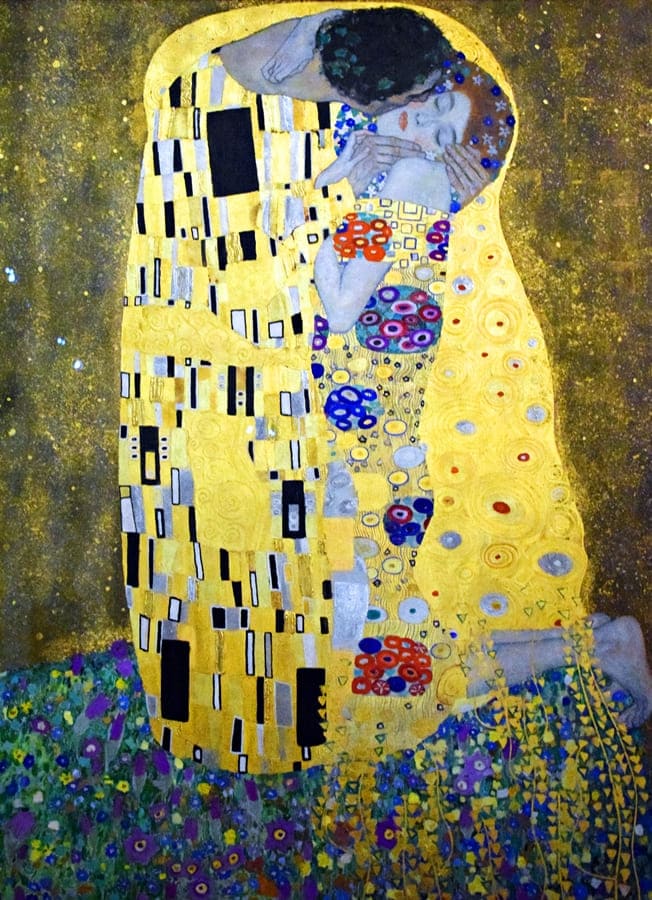 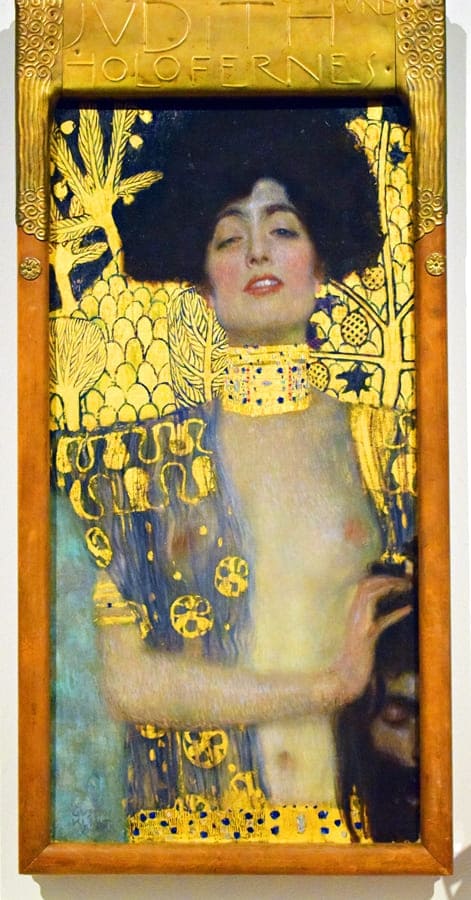 After visiting the Upper Belvedere, you have to go through the Baroque garden to see the rest of the collection in the other building of the complex (Lower Belvedere). Here you will see well-kept flower beds with flowers of a thousand colors, statues, fountains. I remember spending more time in the garden than inside the Belvedere Palace – I admit I’m not a big fan of art galleries, as already mentioned on other occasions. 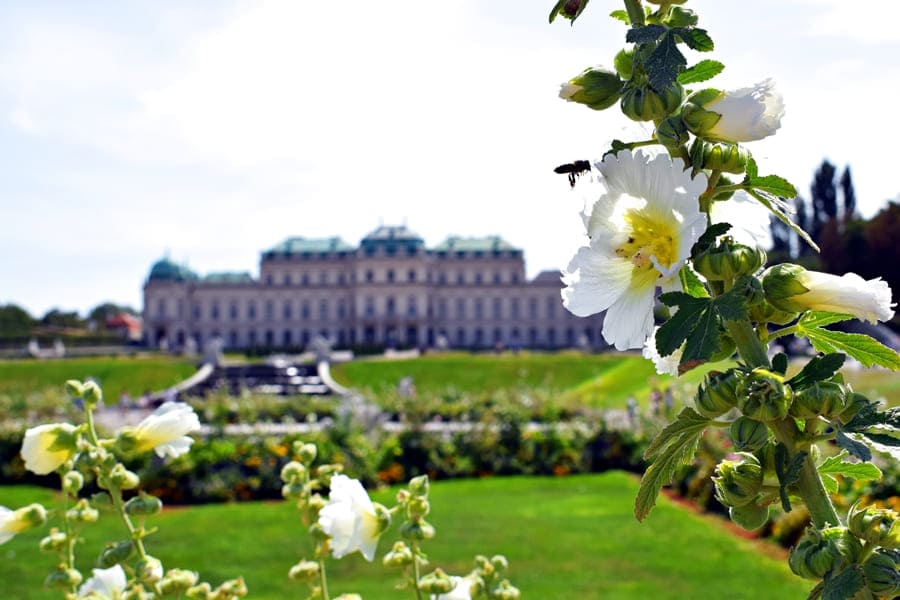 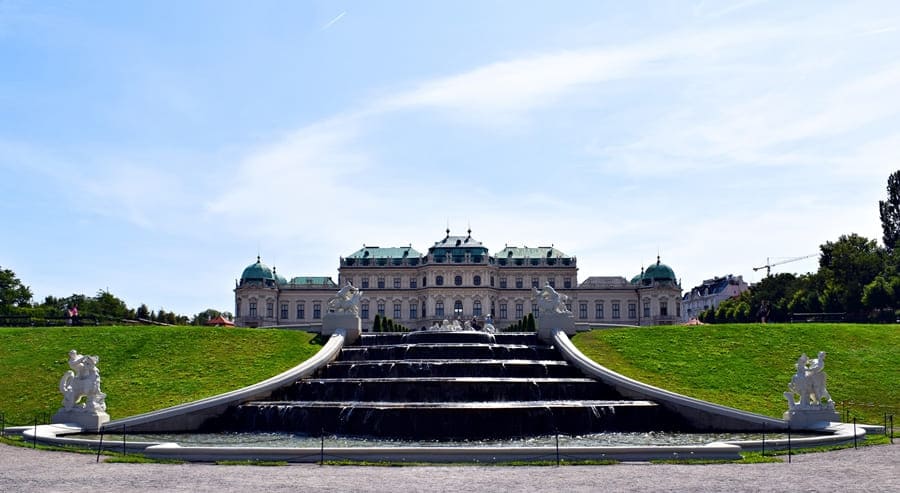 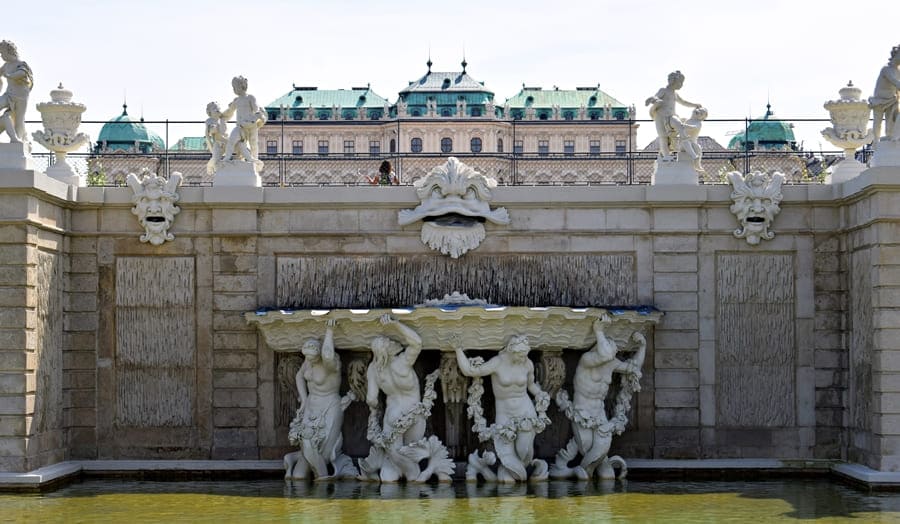 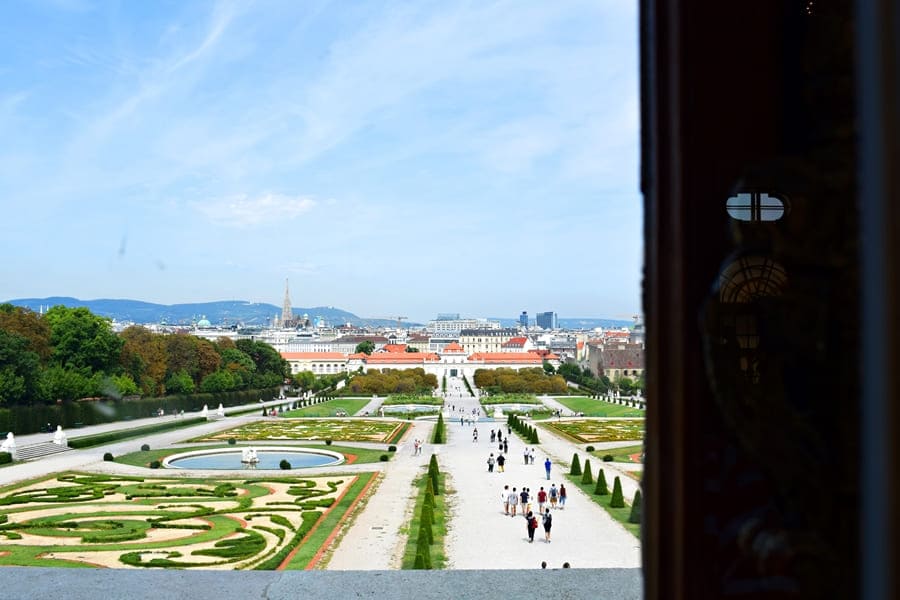 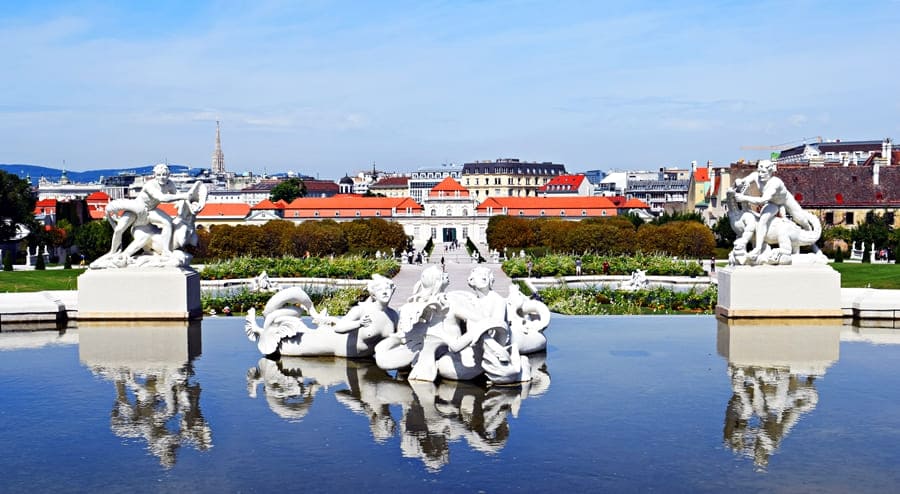 In the afternoon, a relaxing ride was scheduled at Prater park.However, before reaching the park, we decided to make a small stop at the Hundertwasserhaus.

The Hundertwasserhaus is a complex of public housing, built in the 1980s by architect Friedensreich Hundertwasser (pseudonym of Friedrich Stowasser). The artist decided to create more “cheerful” houses for those who had to live there. So he conceived this project with multicolored facades and decorated with ceramics recovered from recycled materials. Moreover, each of the 52 units has its own green space, thanks to the hanging gardens they are equipped with. Don’t be surprised to see trees showing up from the upper floors. 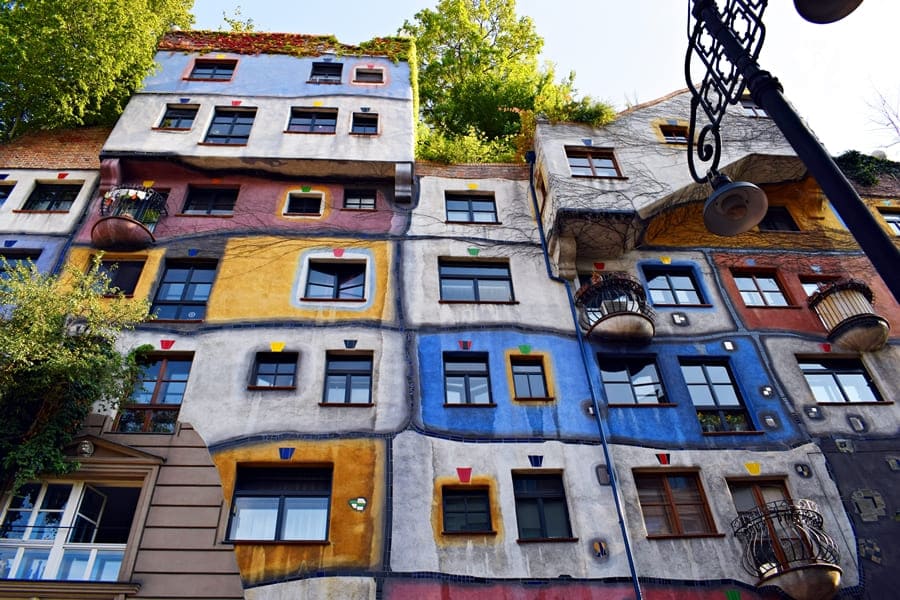 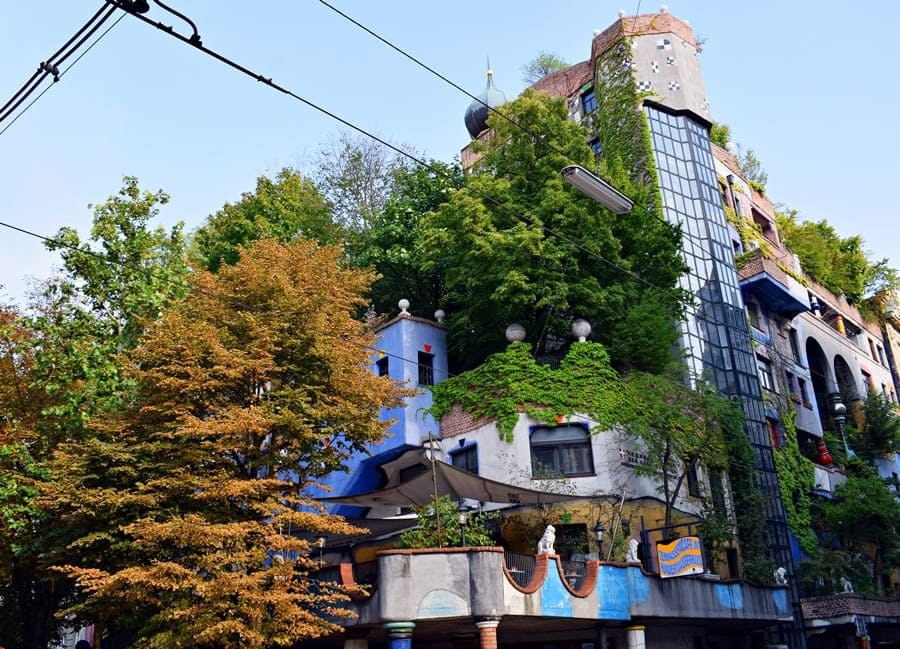 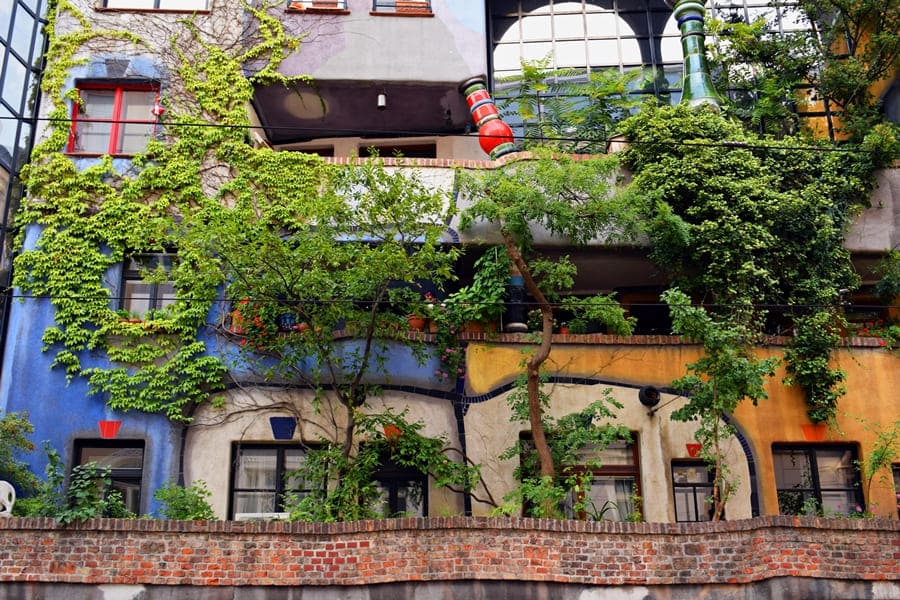 You can visit the small shopping center built right in front of the Hundertwasserhaus, built in the same style. Inside there is a small central square with a bar and several small shops, which mostly sell souvenirs.

The Prater park is the green heart of Vienna.The city has many other parks, but this is the largest and most famous. It is located in the second district, in the Leopoldstadt  neighbourhood.

As soon as you arrive, you immediately notice the tranquility that reigns in this part of the city. We found ourselves in front of a long tree-lined avenue (the Hauptallee) that seemed endless. On either side of the avenue, people were sunbathing, reading a book or playing football on the lawns. In short, a corner of absolute relaxation.

The Prater was once a hunting area; it was Emperor Joseph II who donated this green heart to the city of Vienna, making it a public park. Thus the first bars, restaurants and carousels opened.

If you say Prater, you immediately think of its large amusement park, with over 250 attractions. There’s something for everyone: bumper cars, go-karts, haunted houses, roller coasters, etc. You find the Prater Tower, a 117 meter high merry-go-round, which turns people at a speed of around 60 km/h. 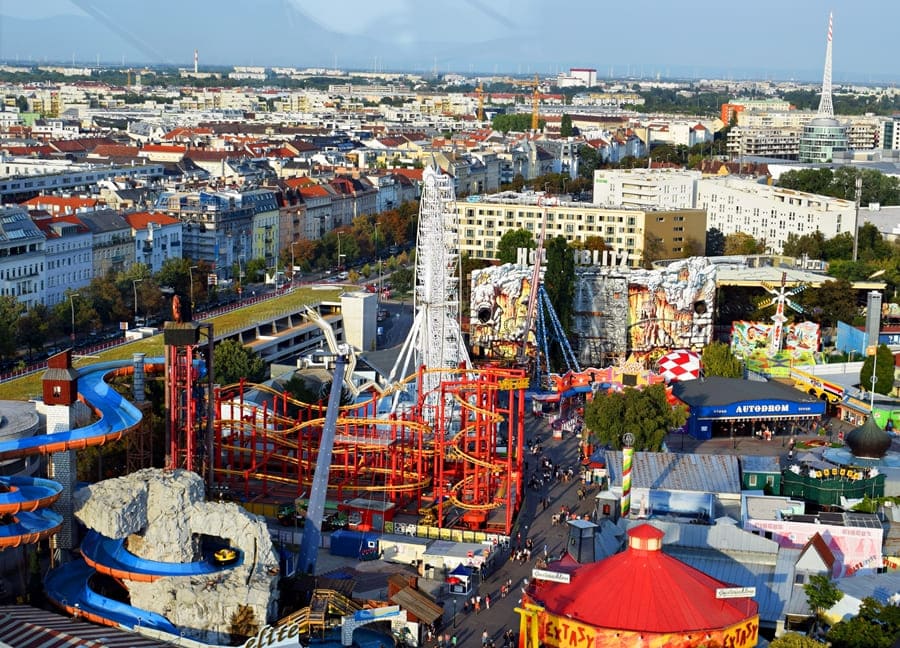 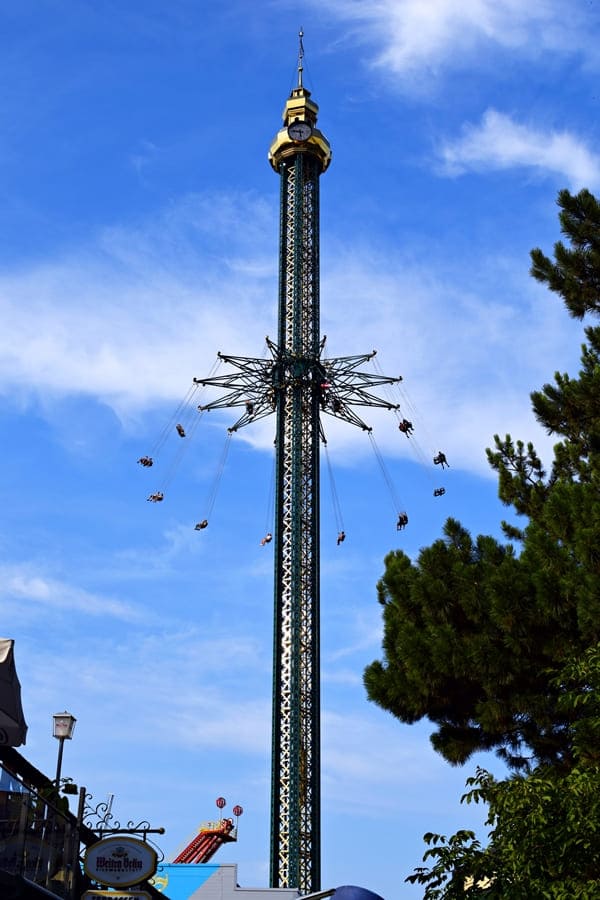 The most famous attraction of the Prater park is its Ferris wheel, the Wiener Riesenrad, which offers a breathtaking view of the city with its 65 meters height. It was built in 1897 to celebrate the 50th anniversary of Franz Joseph’s empire. It was also a location for some films, so much so that it was included in the list of “Treasures of European film culture”.

As I told you in a previous post, you can buy a Wiener Riesenrad + Schönbrunn Zoo ticket, saving a few euros if you intend to visit both attractions. Otherwise, you can get a discount with the Vienna City Card. 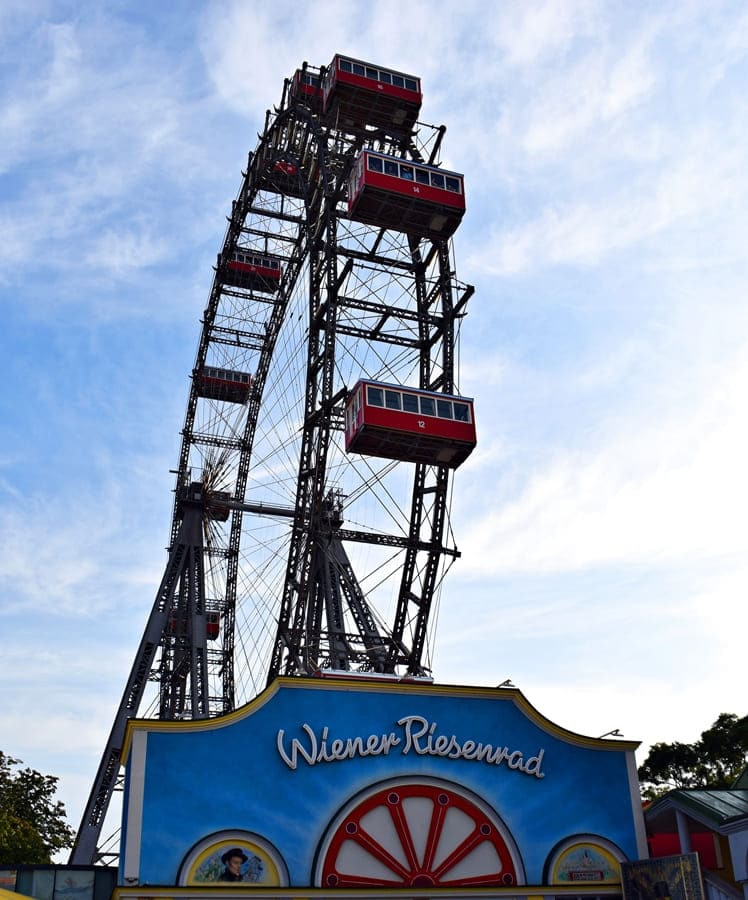 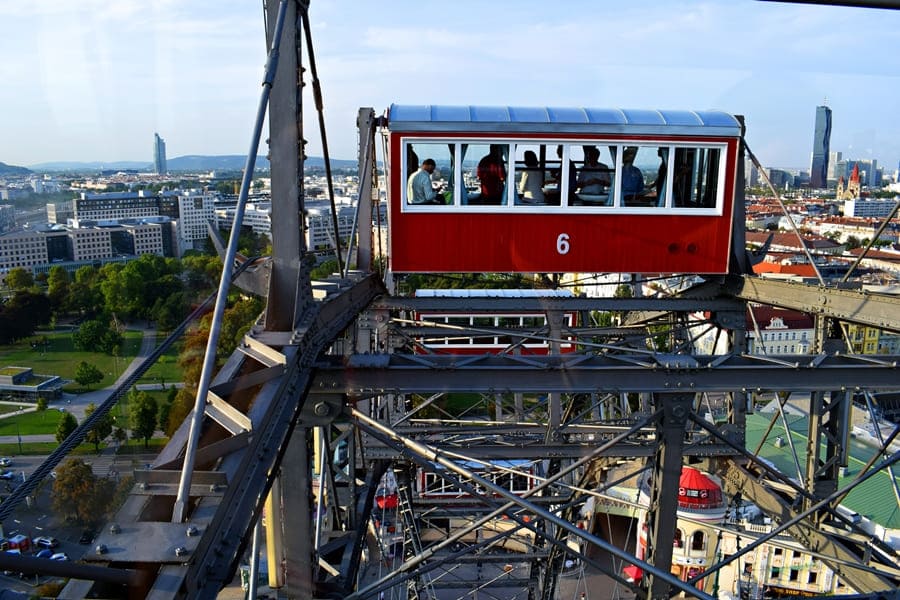 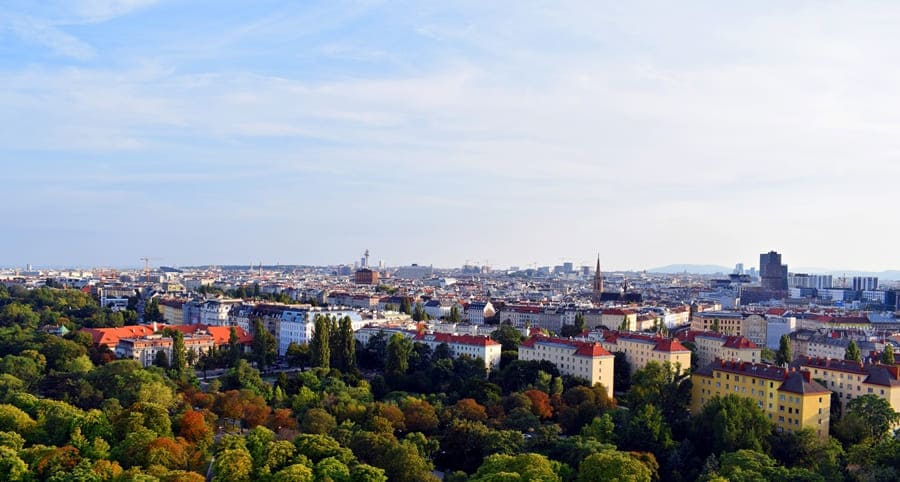 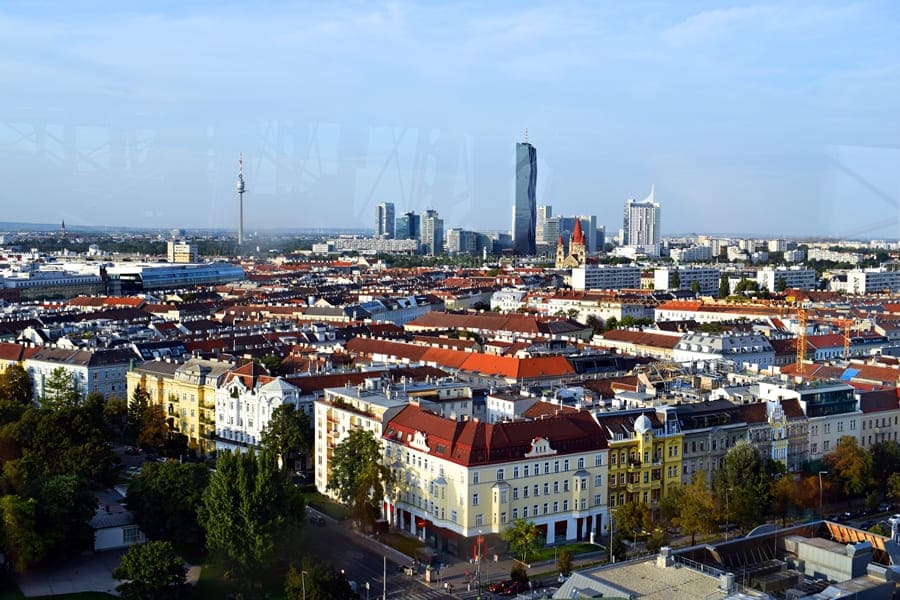 View from the Wiener Riesenrad

In addition to the various carousels, the Prater amusement park offers the Madame Tussauds wax museum, where you can see about 80 wax statues of historical figures and famous people (the statues of Sissi, Nicole Kidman, Robbie Williams, just to name a few). 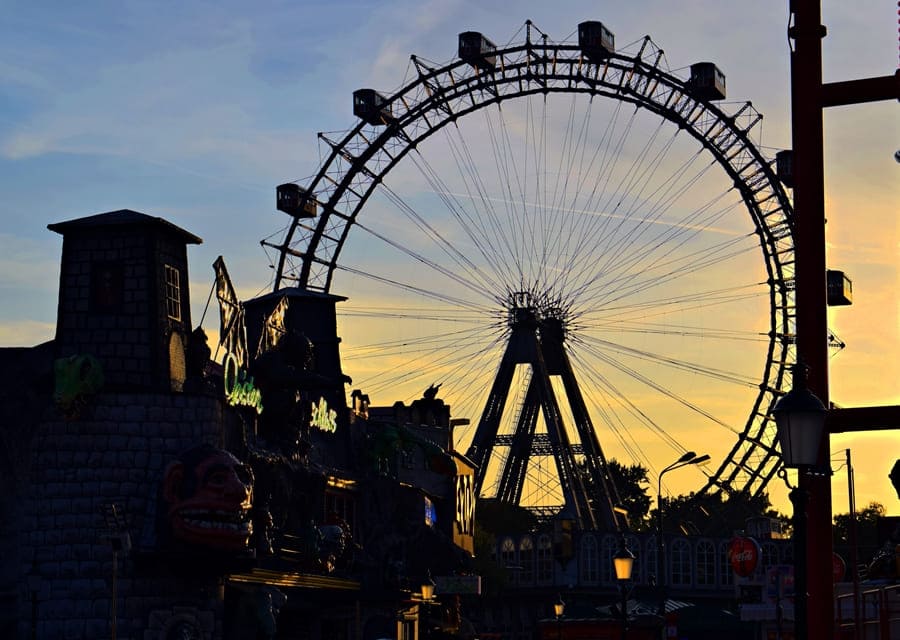 Sunset at the Prater park

Vienna is a demanding city, for all the history and art it offers, so a relaxing walk at the Prater is a must-do.

Here is a video of the day at the Belvedere Palace, the Hundertwasserhaus and Prater park taken from my YouTube channel: