Exploring the historic center of Vienna

I returned from my trip to Vienna a couple of weeks ago and here I am to tell you about it. The trip didn’t start in the best way, because our flight was delayed by two hours, making us arrive at around midnight. Vienna welcomed us under the rain, which fortunately stopped when we left from the airport terminal.

My trip to Vienna lasted a week and this is the itinerary I followed:

In this article I will focus on the first trip day, touring the eastern part of the historic center of Vienna.

Main attractions of the historic center of Vienna


The tour started from the Karlsplatz underground station, Staatsoper exit. Going up with the escalator, the first thing we bumped into was the Vienna Opera House. The idea coming immediately in my mind was that of an elegant city that had so much to offer – this expectation was not disappointed at all. Going a little further on, at the back of the Opera House, we passed the Hotel Sacher… does this name ring any bell? Right there there’s the Cafè Sacher, home of the famous cake – but I’ll talk about this later.

The first stop of the tour of the historic center of Vienna was the Tourist Office in Albertinaplatz, where I took the Vienna City Card (for more information, please check the official website of the Tourist Board). After a short break for breakfast, we walked through Kärntnerstraße, a pedestrian street with lots of shops leading to Stephansplatz, the heart of the historic center of Vienna, where the Stephansdom (St. Stephen‘s Cathedral) is located. Given the time, we decided to postpone the Stephansdom visit for a few minutes, because we had an appointment in Hoher Markt at noon.

What to see in the historic center of Vienna: Hoher Markt and the Ankeruhr

Hoher Markt is Vienna‘s oldest square. In the Middle Ages there stood the Palace of Justice, the pillory and the remains of the first Roman settlements were found in the basements. 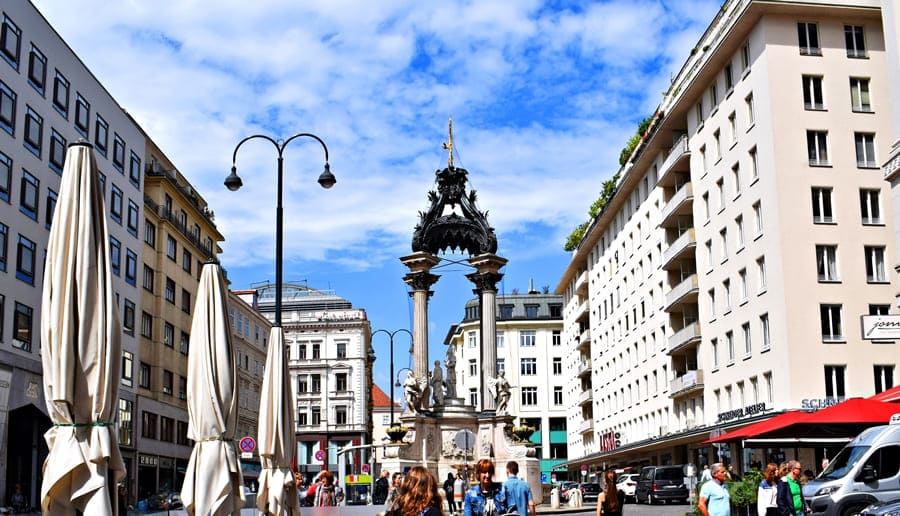 The main attraction of the square is the Ankeruhr, a clock of the early XX century in Art Nouveau style, presenting itself as a bridge that connects the 10 and the 11 house numbers. In the space of 12 hours, many illustrious figures of Viennese history move. At midday, however, all the figures parade with a musical accompaniment. 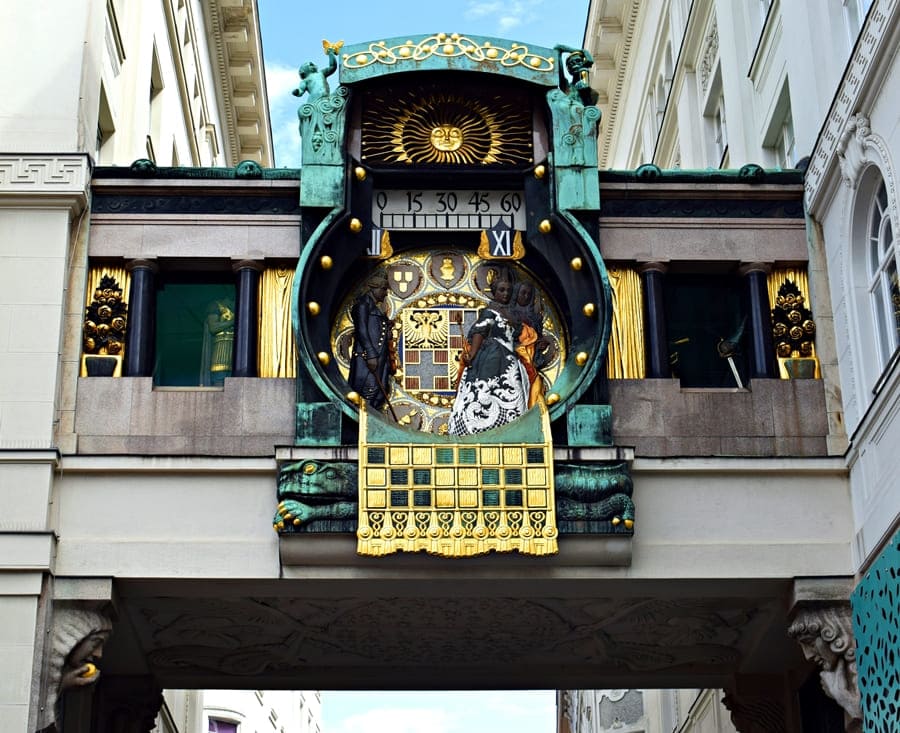 What to see in the historic center of Vienna: Stephansdom (St. Stephen’s Cathedral)

Back at Stephansplatz, we entered the Stephansdom, which is one of the symbols of the city. Admission is free, even if inside you will find barriers that will allow you to access only one of the two side aisles. To visit the rest of the cathedral, it is necessary to purchase an entrance ticket. 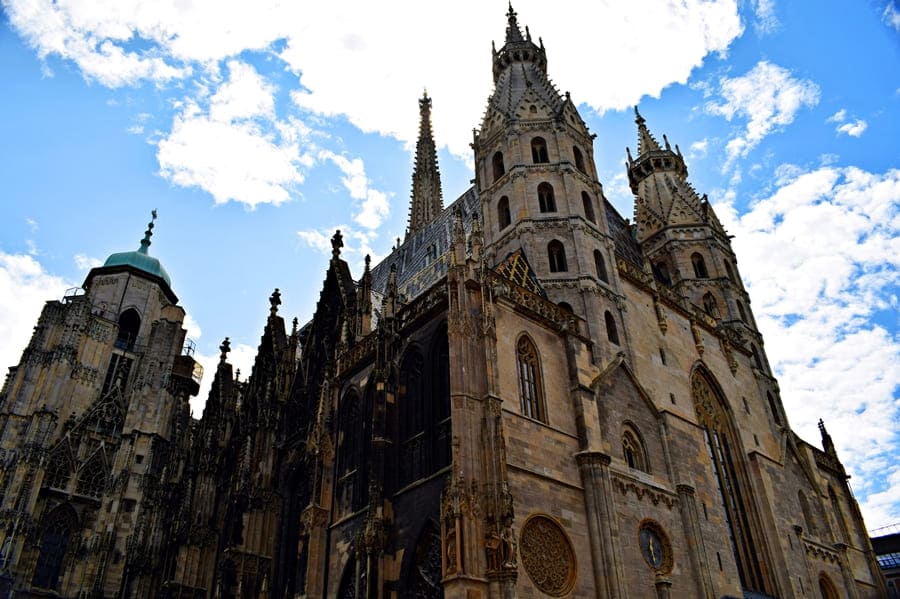 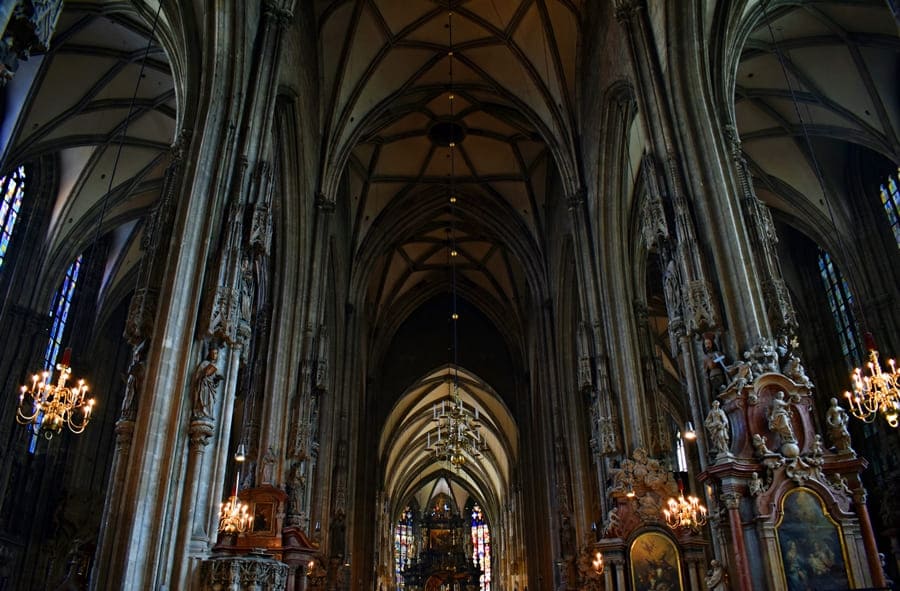 Interior of the Stephansdom

The cathedral, originally in Romanesque style (of which only a few elements remain in the western façade), is the highest expression of the Austrian Gothic style. Inside you can see various works of art, first of all the pulpit of the sixteenth century, the Gothic altar, the tomb of Emperor Frederick III and the sepulchral monument of Prince Eugene of Savoy. 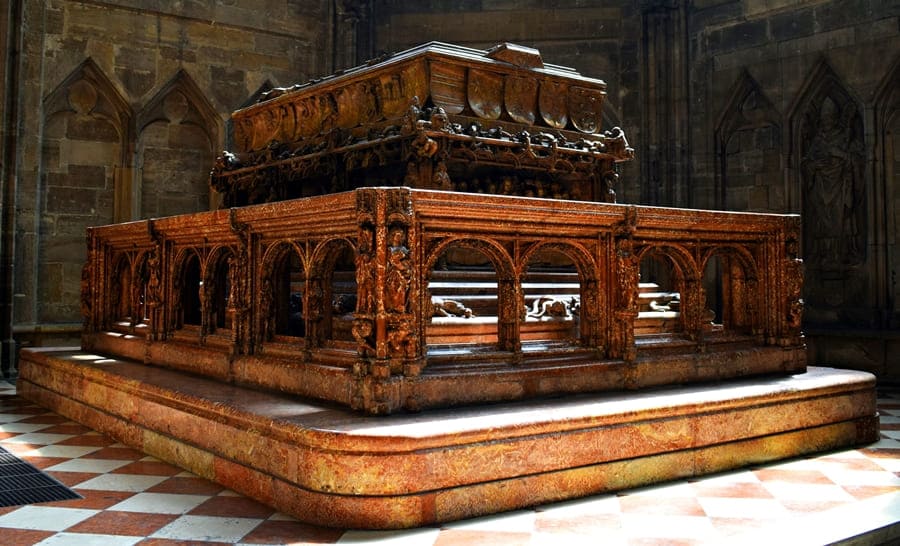 The tomb of Emperor Frederick III 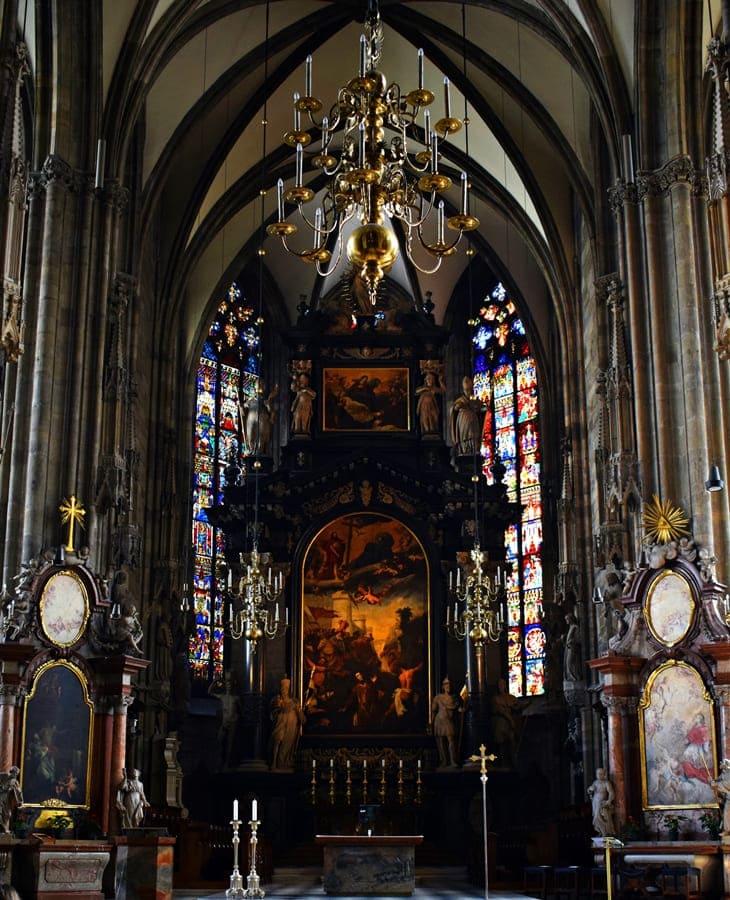 Altar of the Stephansdom 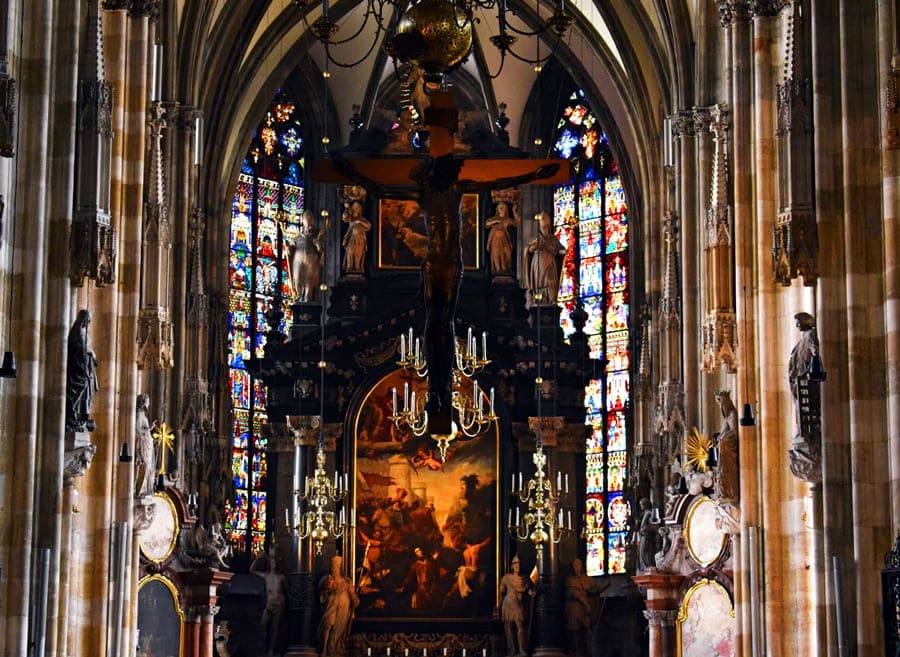 Crucifix of the Stephansdom 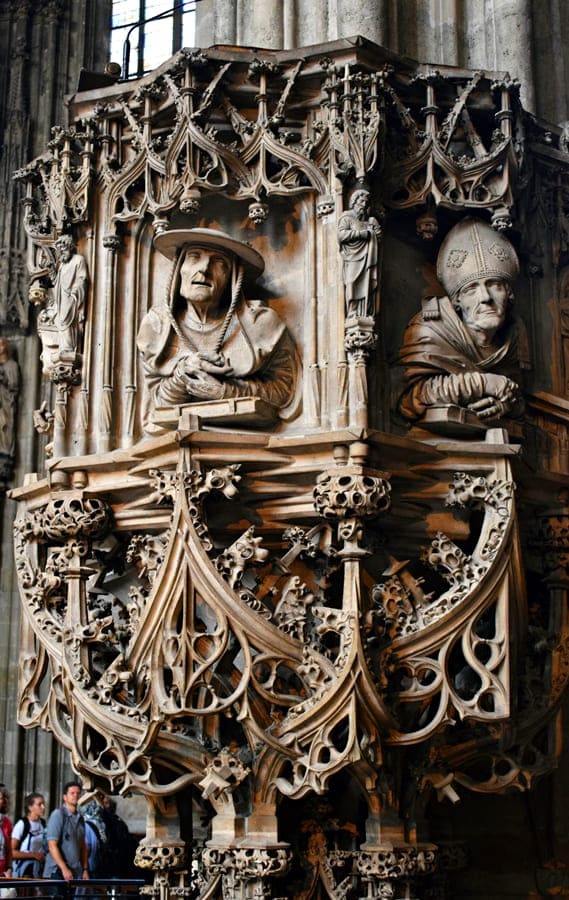 Detail of the sixteenth-century pulpit

It is also possible to visit the catabombs of the Stephansdom, where the first 15 Habsburg emperors are buried and the urns containing the bowels of all the emperors of Austria are kept. Their bodies are buried inside the Kapuzinergruft (Capuchin Crypt or Imperial Crypt, see below), while their hearts are kept in other urns at the Augustinerkirche. The complete tour of the catacombs lasts about 30 minutes and, moving to the basement of the cathedral, it is also possible to see some mass graves, where the remains of many Viennese citizens are still buried.

At the top of the Stephansdom

The tour of the cathedral doesn’t end here. In fact it is possible to climb with a lift on the north tower, where you can find the Pummerin, a bell of 21 tons made by the fusion of the Turkish cannons conquered after the siege of 1683. The view from up there all over Vienna is spectacular, also allowing you to see the geometry of the cathedral roof. 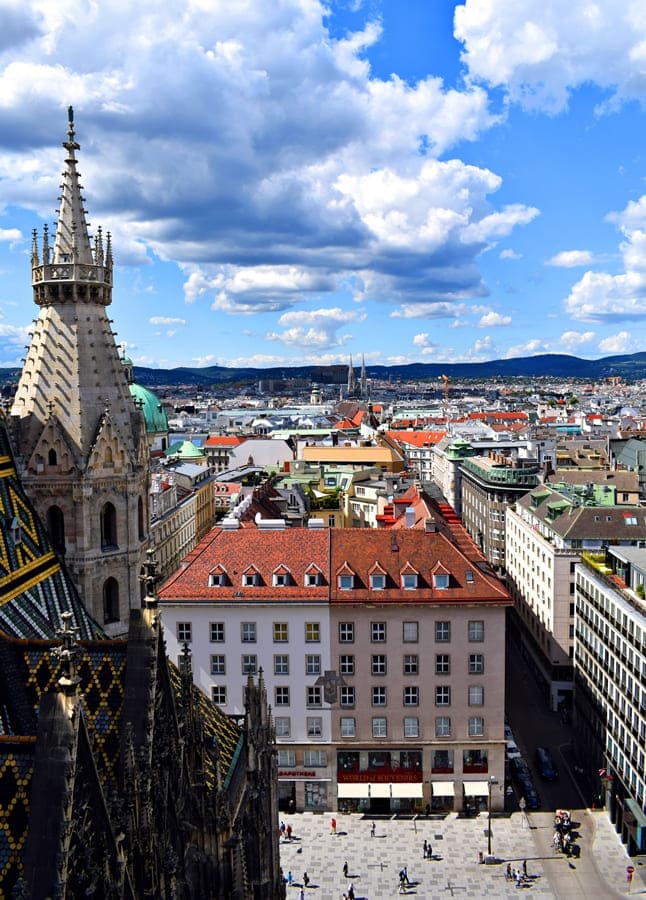 Panorama from the Staphansdom North Tower

View over Vienna from the Stephansdom 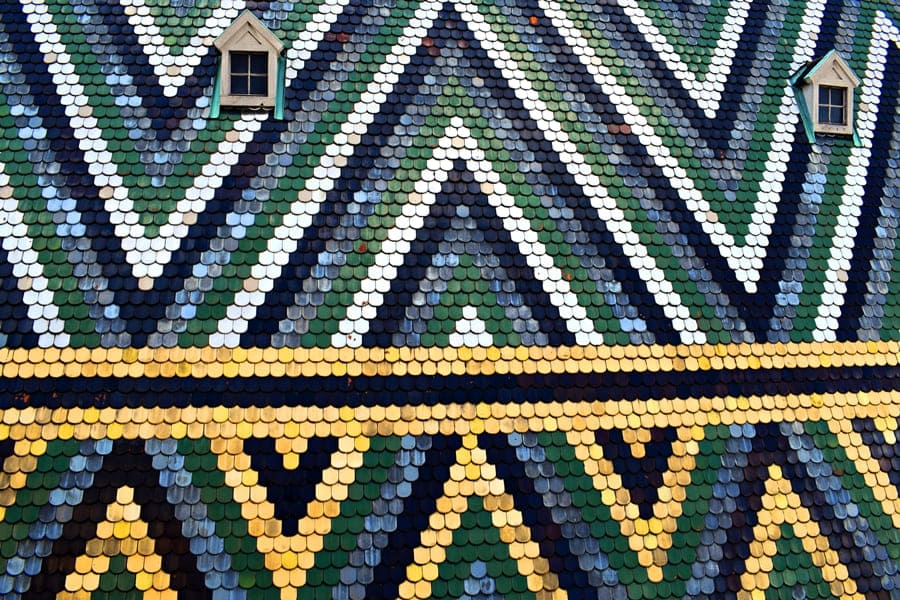 Geometries of the Stephansdom roof 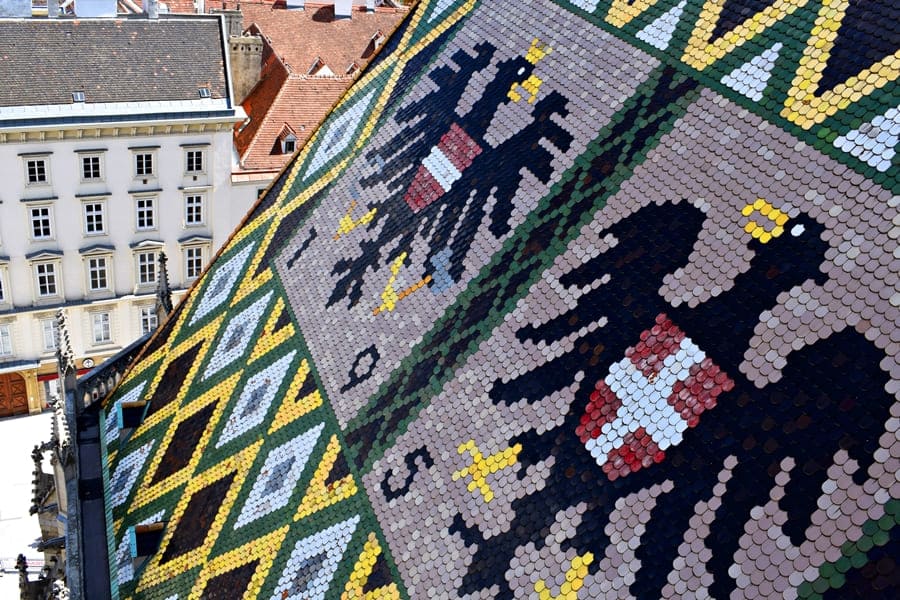 Insegna of the Habsburg Austria on the Stephansdom roof

You can also go up on the south tower, climbing its 343 steps, and see the Treasures of the cathedral.

What to see in the historic center of Vienna: Jesuitenkirche

Walking through the streets of the historic center of Vienna, we bumped into the Jesuitenkirche (Jesuit Church), a jaw-dropping baroque church with rich decorations. 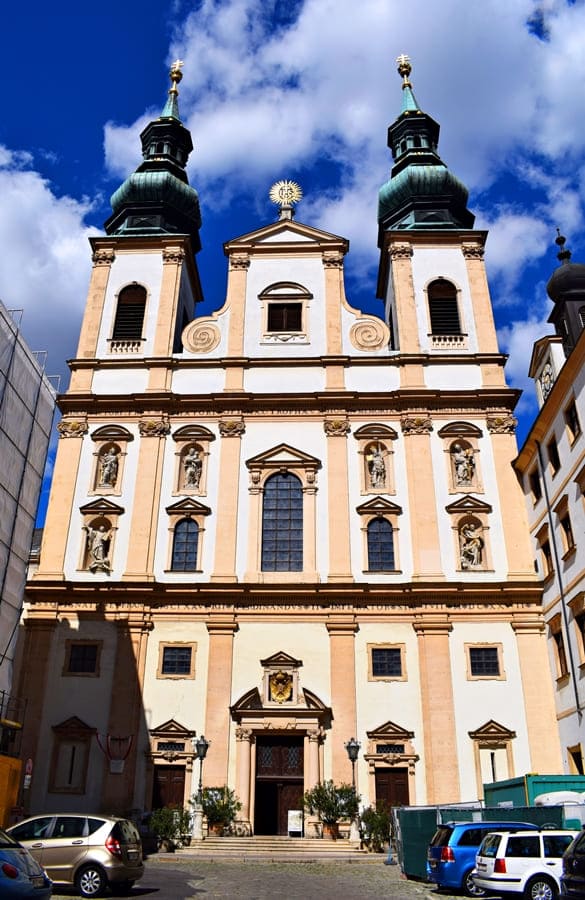 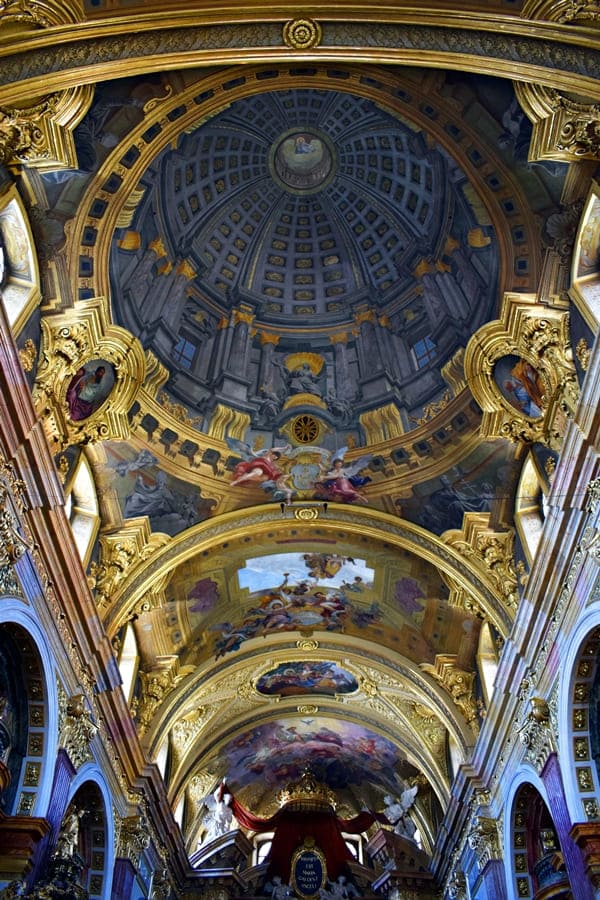 Ceiling of the Jesuitenkirche 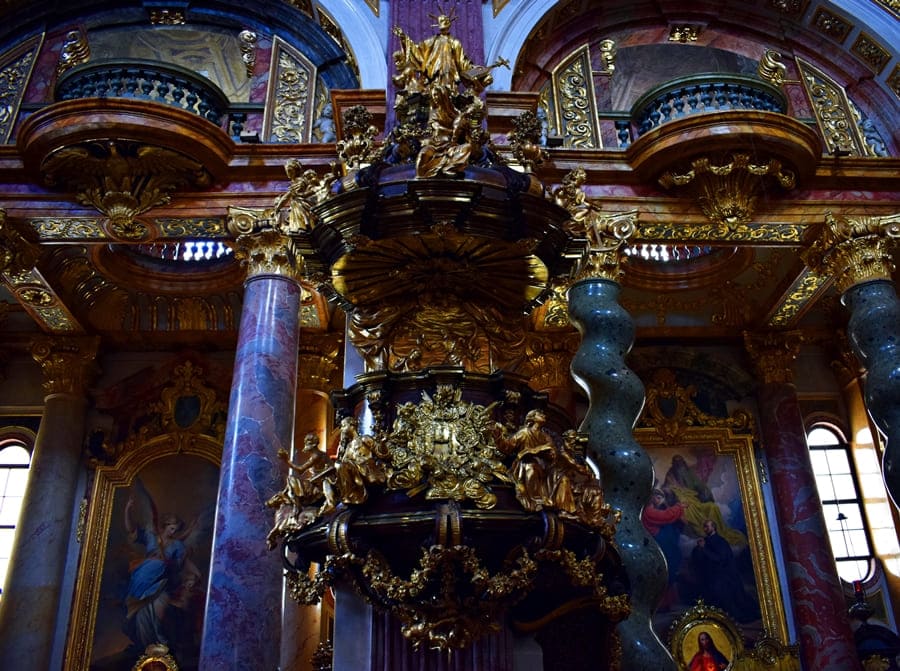 Near the Jesuitenkirche stands the Mozart House, where the great Maestro lived between 1784 and 1787 and composed The Marriage of Figaro.

What to see in the historic center of Vienna: Kapuzinergruft or Kaisergruft

After lunch (actually it was already afternoon), we headed to the Kaisergruft (the Imperial Crypt), where almost the Habsburg emperors and their closest relatives are buried. The crypt is located inside the Kapuzinerkirche (the Capuchin church), located at Neuer Markt, one of the city’s oldest squares, in the middle of which stands one of the most beautiful fountains of the historic center of Vienna, the Donnerbrunnen. 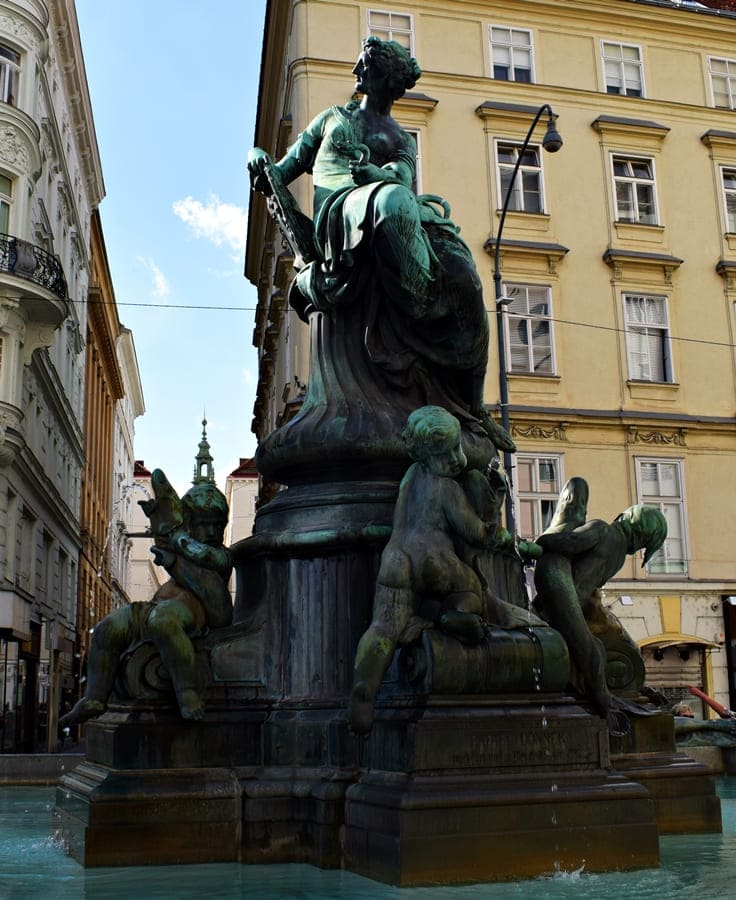 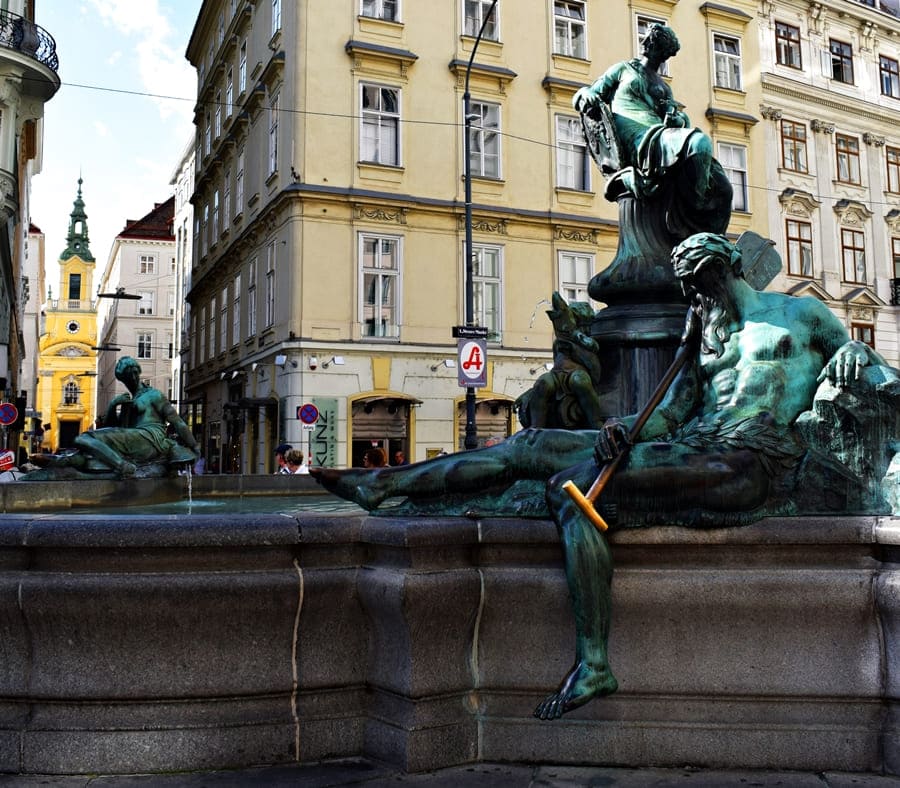 Among the 138 coffins in the crypt, the most striking is certainly the double sarcophagus containing the remains of Empress Maria Theresa and her consort Francis I. Another stop inside the crypt is the tomb of the Empress Elisabeth (also called Sisi), placed next to the one of her husband Franz Joseph. 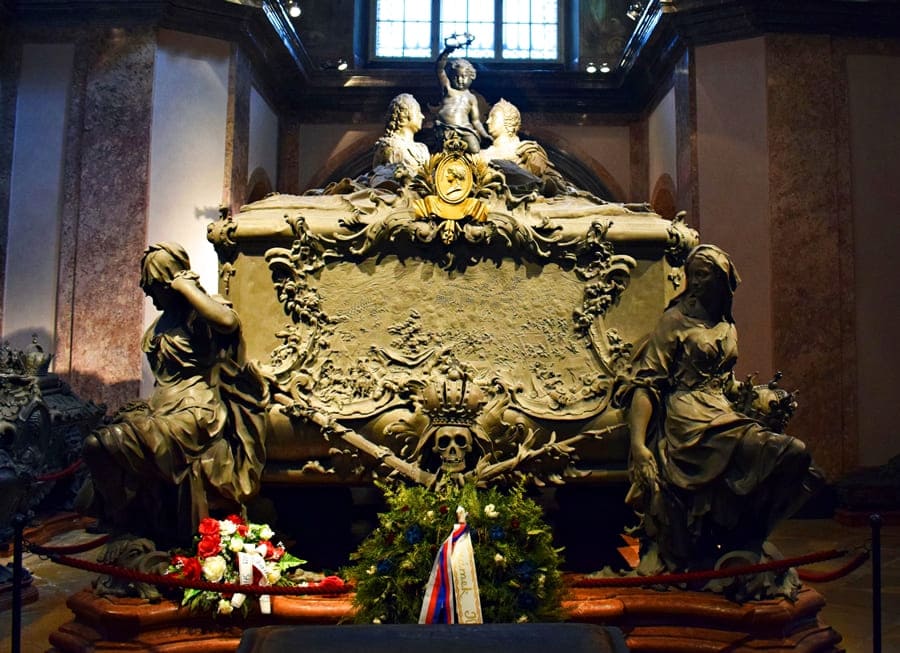 Sarcophagus of Maria Theresa and Francis I 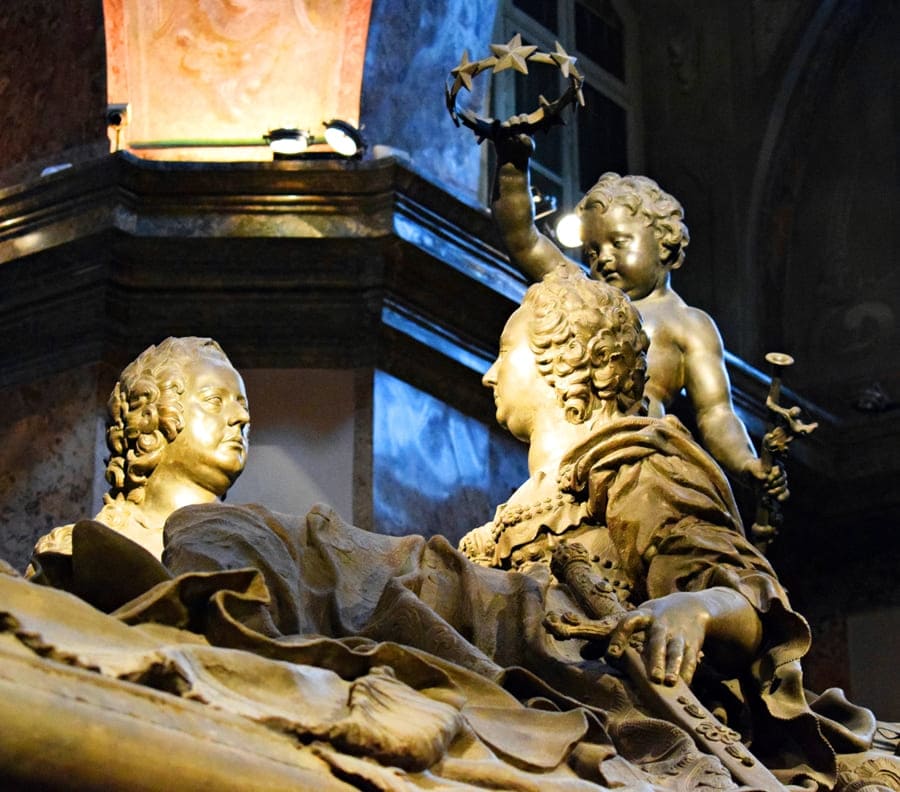 Detail of the sarcophagus of Maria Theresa 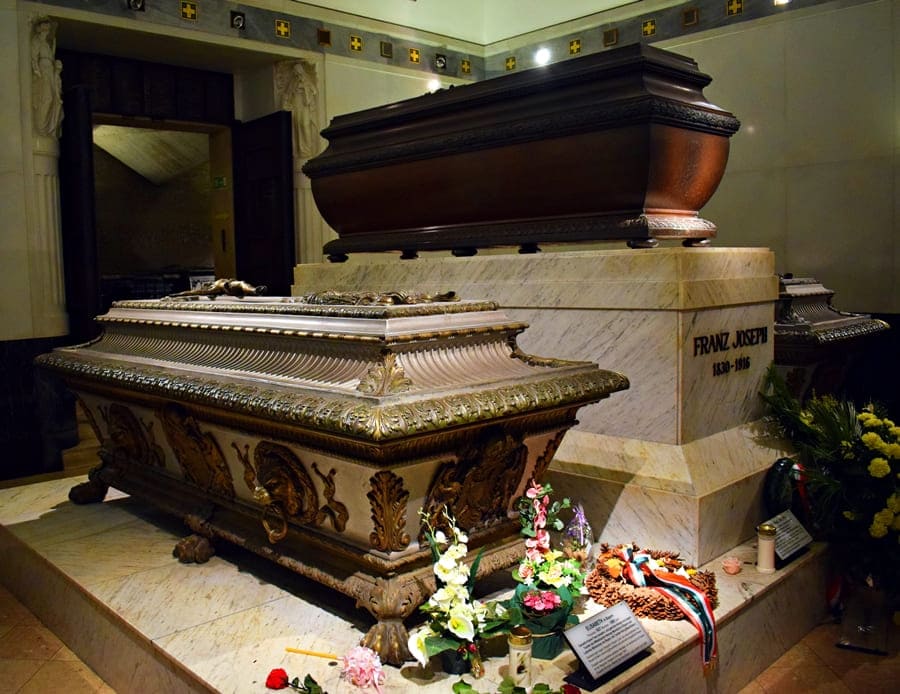 After leaving the Imperial Crypt, we headed back towards Stephansplatz (being the heart of Vienna, we will find yourself continuously in that square). Coming from Kärntnerstraße and turning left just before entering Stephansplatz, you get to a large pedestrian street called Graben. t is another shopping street in Vienna, where you will find many shops, bars and restaurants. More or less in the middle of the street, we found the Pestsäule (Plague Column), donated to the city by Emperor Leopold I in memory of the plague that killed more than 100,000 Viennese citizens in 1679. 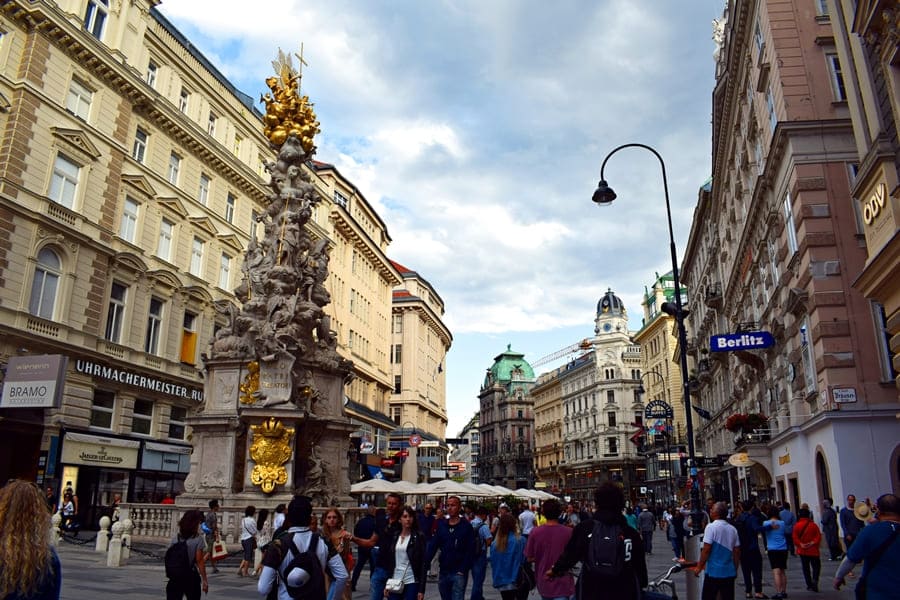 What to see in the historic center of Vienna: Peterskirche

Along the Graben street, on the right you bump into a small square with a church, the Peterskirche (St. Peter’s Chruch). It is the second oldest church in Vienna, in fact its oldest nucleus dates back to the time of Charlemagne. Over the centuries it has been remodeled several times, becoming one of the highest expressions of Austrian baroque. It is striking how the church was built in such a narrow space: if you look carefully, in fact, the central body of the church appears between two bell towers, seeming almost crushed by its large dome, which is richly frescoed inside and depicts the coronation of the Virgin Mary. 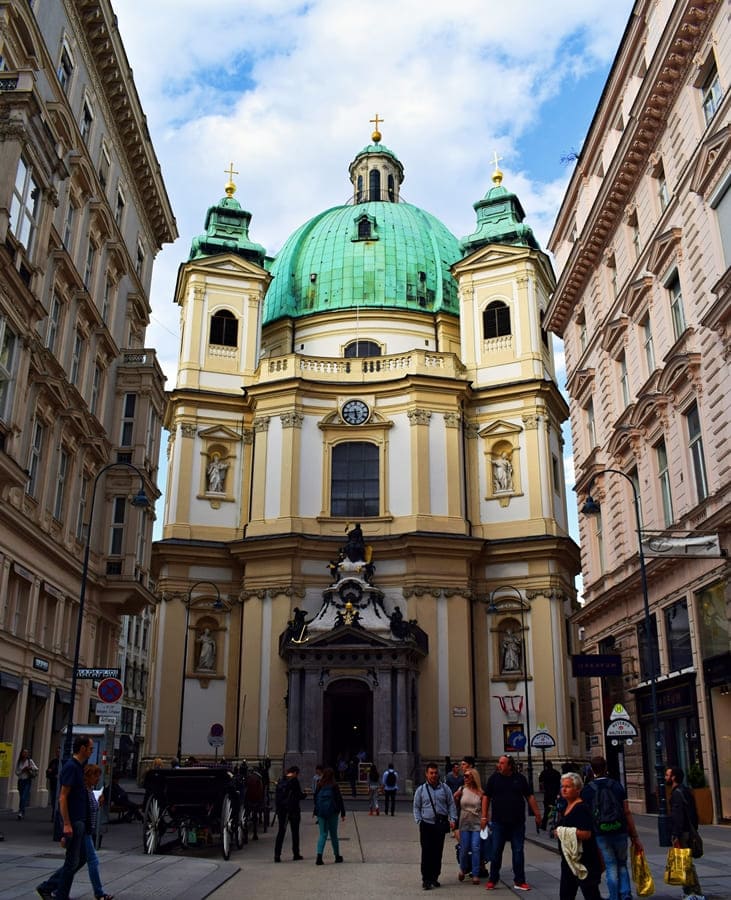 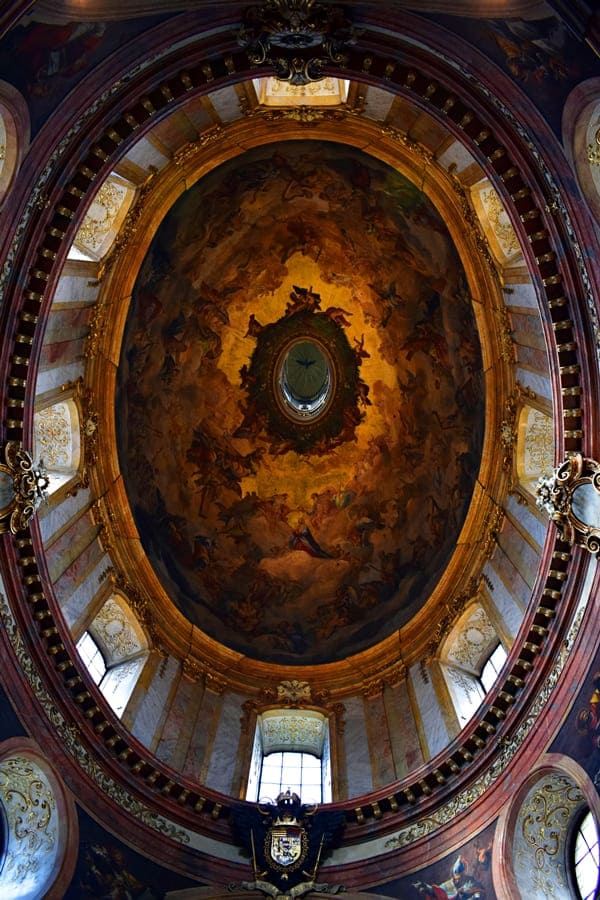 Frescoed dome of the Peterskirche 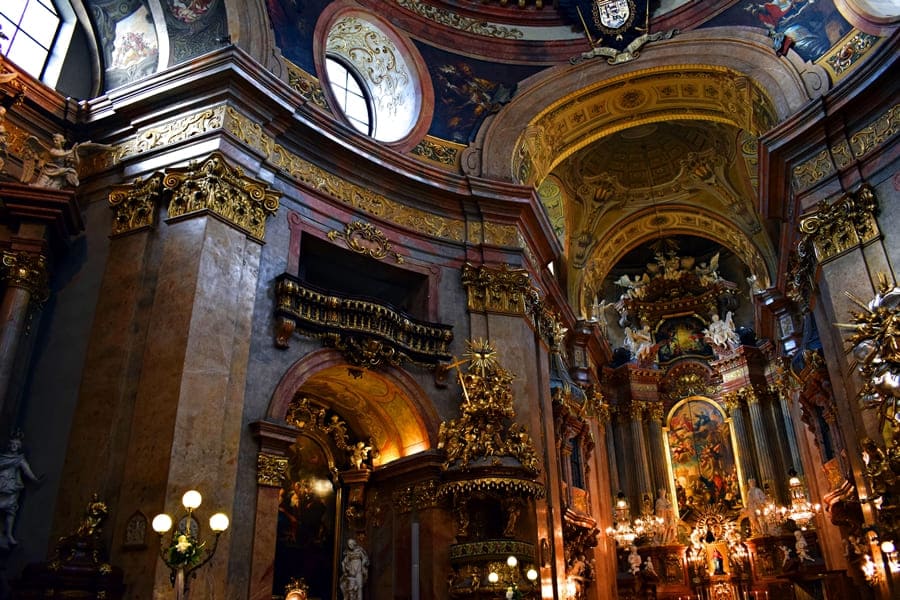 Interior of the Peterskirche 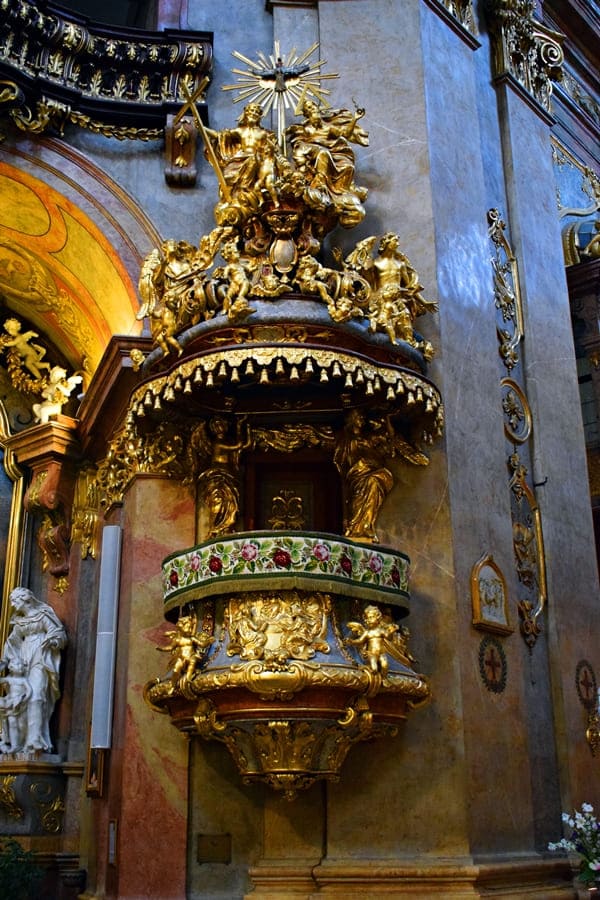 With the Peterskirche the first day of my trip to Vienna ends, actually only the exploratory part, because in the evening I enjoyed the first Wiener Schnitzel (Viennese cutlet) of the trip, accompanied by a very good potato salad and excellent beer.

In the next post I will talk about the second trip day, discovering the Schönbrunn Palace.