Home » Europe » Slovakia » Day trip to Bratislava: how to get from Vienna and what to see

Day trip to Bratislava: how to get from Vienna and what to see

After talking in detail about my trip to Vienna, here I am to tell you about my day trip to Bratislava, the capital of Slovakia.

During the planning of the trip to Vienna, I evaluated the possibility of spending one day to visit a city outside the Austrian capital, having an entire week available. At the beginning it was thought to go to Salzburg, but then, after consulting the train times and travel times, we abandoned the idea because it was not feasible to go and come back in the same day.

We could go to Prague, but even in this case it wasn’t comfortable to do a touch and go in one day. In the end, the choice fell on Bratislava. Given the proximity to Vienna, the choice could not fail to fall on it and I was literally excited about ​​visiting two European capitals in the same trip. I didn’t know anything about Bratislava and up to that moment I didn’t even consider it as a possible destination for one of my upcoming trips. Well, thank goodness I had the chance to visit it, because it was really worth going there.

Bratislava: how to get from Vienna

One factor that made me choose Bratislava as a destination for a day trip from Vienna  was undoubtedly the proximity between the two cities (about 80 km). But let’s see how to get to Bratislava from Vienna. There are several options:

Among the three options I chose to go by train, because I evaluated it much more convenient and economical also in terms of time.

What to see in Bratislava

Left from Wien Hauptbahnhof, we arrived at Bratislava Hlavná Stanica station after one hour. Leaving the station, we immediately understood that here English is not understood by everyone, indeed. We didn’t know which bus to take to get to the center of Bratislava. We couldn’t use Google Maps because the city’s public transport system was not integrated. So we asked passers-by which bus to take and nobody understood. In the end, Google Maps in hand we reached the center of Bratislava on foot in about a quarter of an hour.

On the way to the Bratislava Castle, we came across the Grassalkovič Palace, residence of the President of the Slovak Republic. It was built in the 18th century as a summer residence of Count Anton Grassalkovič, but it immediately became the center of Slovak high society. The Presidential Palace can’t be visited, but you can access its French gardens and watch the changing of the guard.

After a nice climb with several restaurants and bars (including one with cats), we arrived at the Bratislava Castle, which overlooks the city. 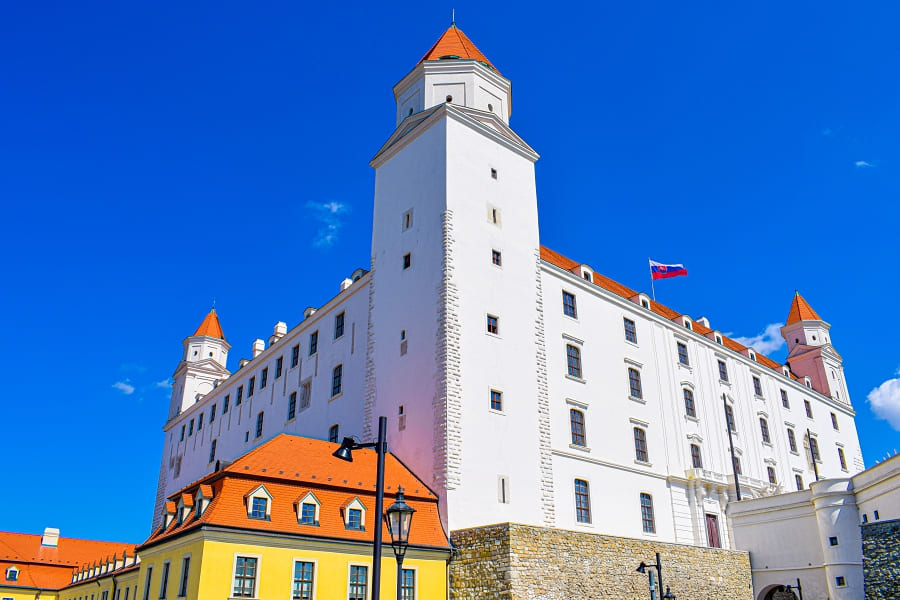 The castle is striking for its fortifications and the Celts and the Romans had already used this site to build defensive barriers. It was built when Bratislava became the capital of the Kingdom of Hungary in the 16th century, when Budapest was under Turkish control. The first Hungarian ruler to be crowned in Bratislava was Maximilian II, who had the castle restored so that it became the residence of the royal family. The crown jewels were kept in the Crown Tower, from where it is possible to enjoy a marvelous view of the city and of the surrounding region. The castle was even used as a summer residence by Empress Maria Theresa of Austria. Today the castle houses the History Museum and the Music Museum.

View of Bratislava from the castle

I didn’t visit the interior of the castle, because this would have taken me time. However, if you stay in the city for more than a day, I recommend you to visit it also inside. Free of charge, however, it is possible to wander around the castle and its gardens, from where you can enjoy a beautiful view of the whole city and the Most SNP (SNP Bridge), with its characteristic UFO Restaurant. 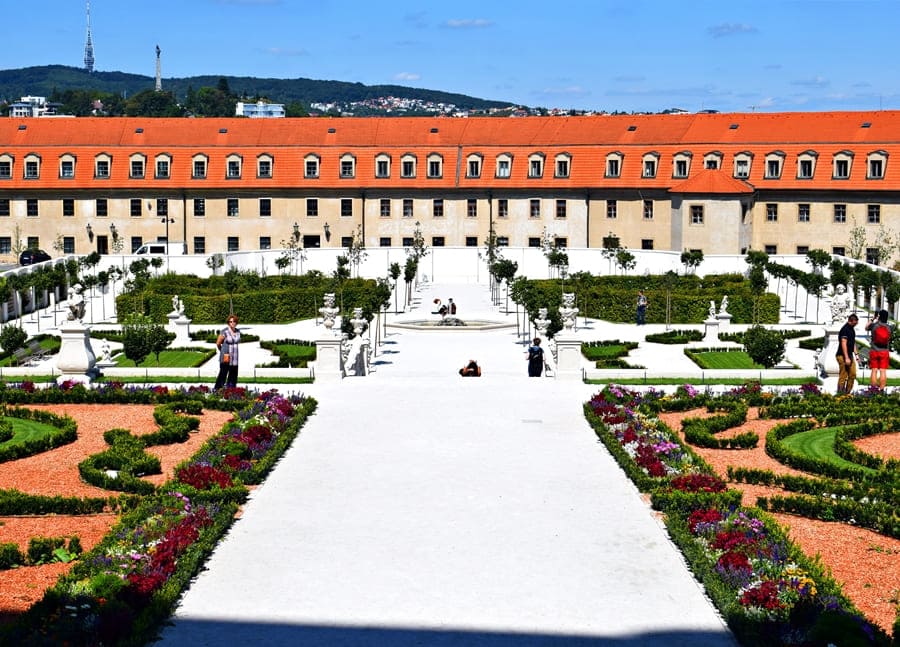 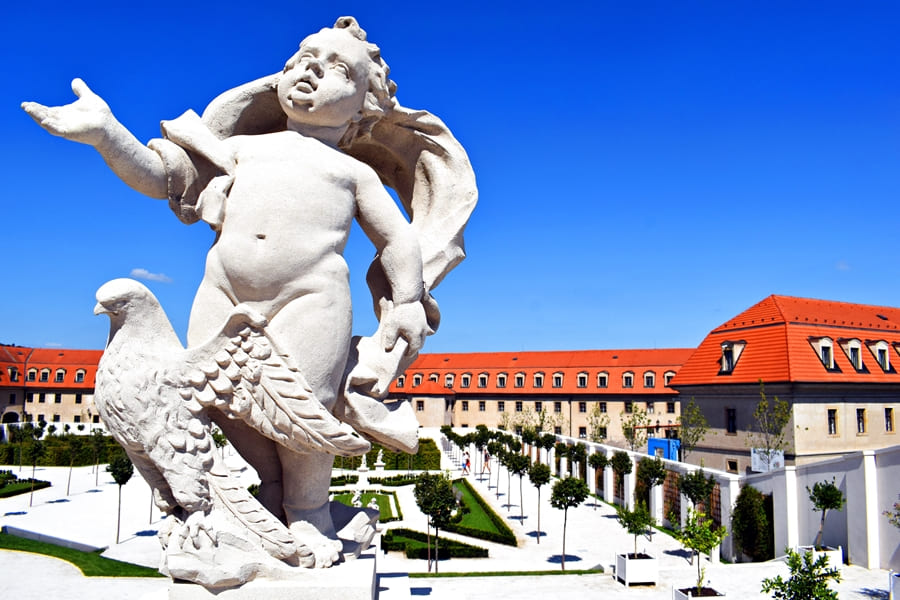 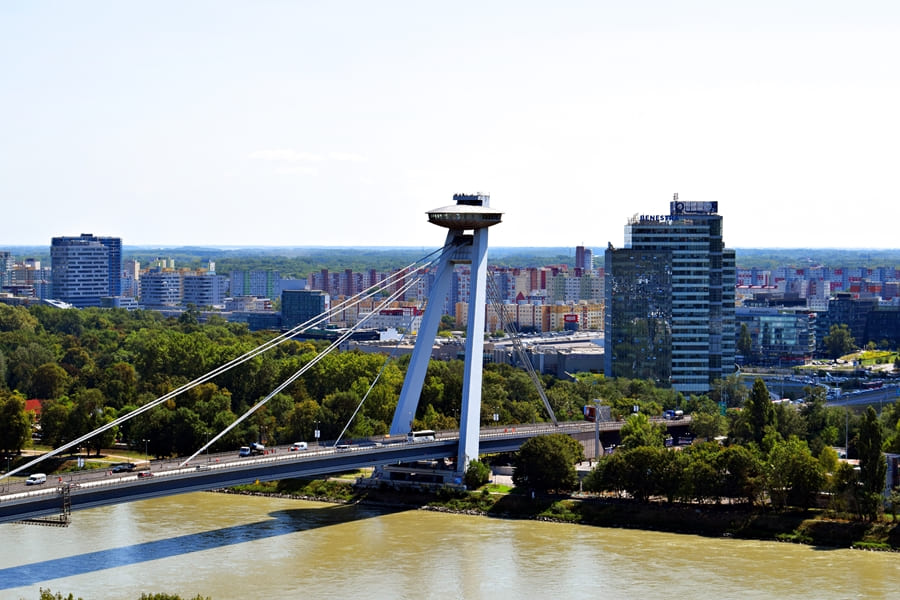 Most SNP with its UFO Restaurant

During the descent from the castle, we stopped at the Zelený Rodrigéz restaurant, where we enjoyed an excellent goulash and a Hungarian dessert of which I can’t remember the name.

After lunch, the exploration of the center of Bratislava began, starting from St. Martin’s Cathedral. The construction work began in the 13th century, but it was completed only in the 15th century. 19 kings and queens of Hungary were crowned in this Cathedral and its glorious past is still witnessed by the crown plated on the top of its 85 meters high tower. 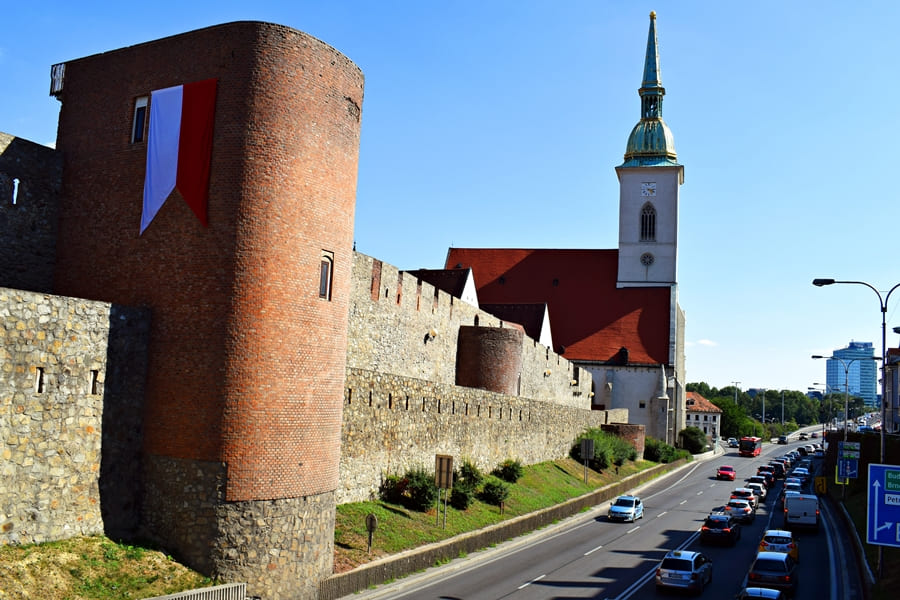 Inside, the Cathedral is in Gothic style, although there are several Baroque elements, due to subsequent works. The building was built adjacent to the city’s fortifications, which are still partially visible today; this is the reason why the entrance to the Cathedral is not frontal to the main altar. 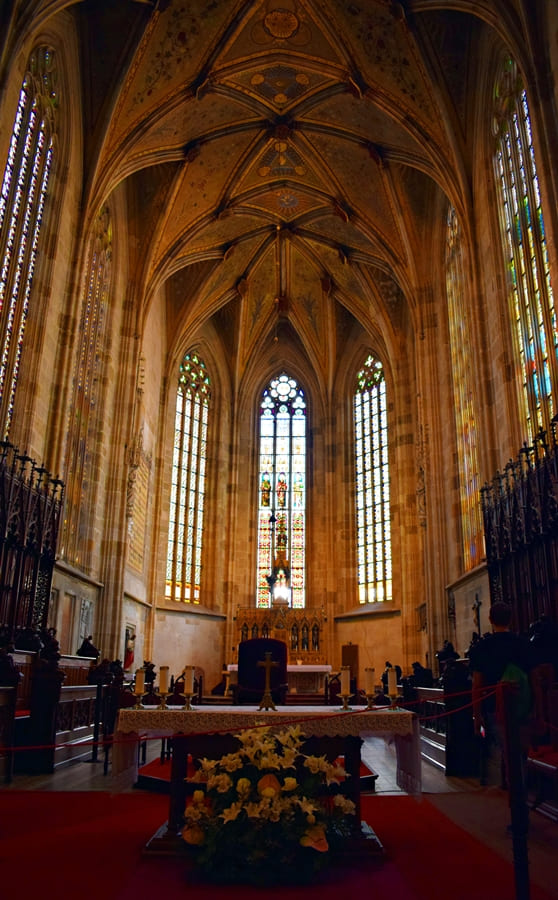 Walking through the city center, you’ll bump into various bronze sculptures that capture the attention of visitors and have become one of the main attractions of Bratislava. They were installed after the fall of communism, when the city wanted to free itself from the greyness of past times. These statues have met with great success among tourists, becoming one of the most photographed attractions in Bratislava. Many visitors make real exploratory tours of the center of Bratislava to hunt for these very nice bronze statues.

The most beloved statue among tourists is surely Čumil, which represents a man coming out of a manhole. According to some interpretations, it is a soldier, according to others a man who looks under the skirts of the ladies, for others a spy on the run or a worker who has just finished cleaning the sewer. 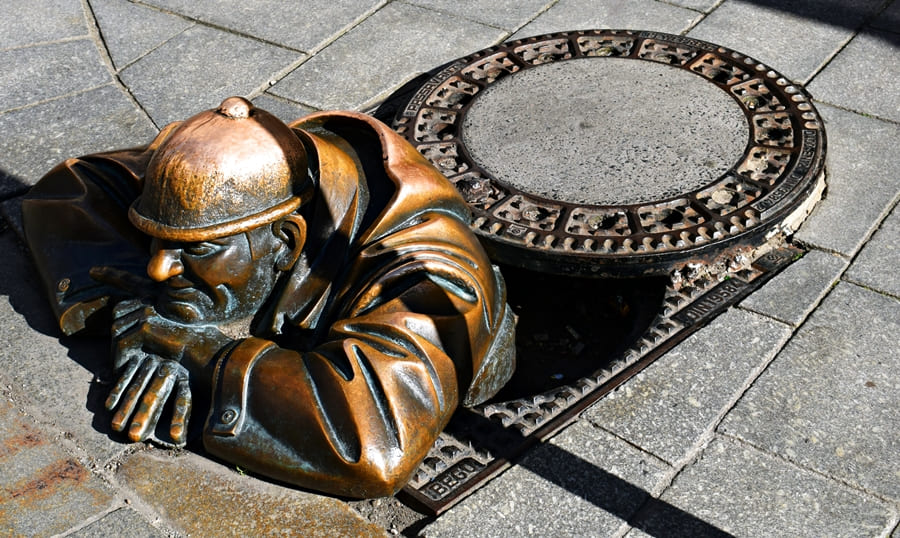 Another famous statue is Schöne Naci, which depicts Ignác Lamar, a well-liked 20th-century Bratislava citizen, who used to dress elegantly in tailcoats and top hat. 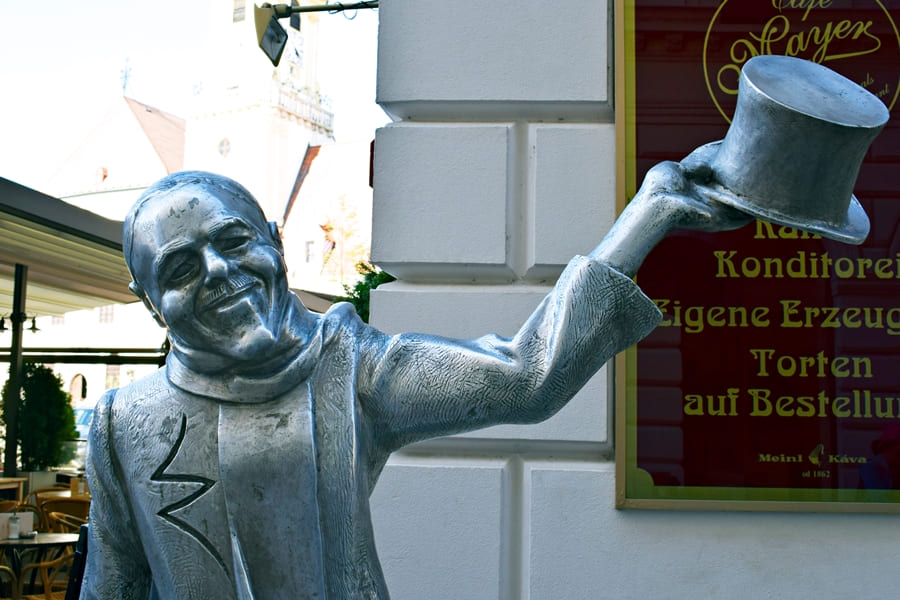 Then there is the statue of the Napoleonic Soldier resting on a bench in Hlavné Namestie, the main square of the old city (Staré Mesto). This statue recalls the two sieges of Bratislava by Napoleon Bonaparte and his troops. 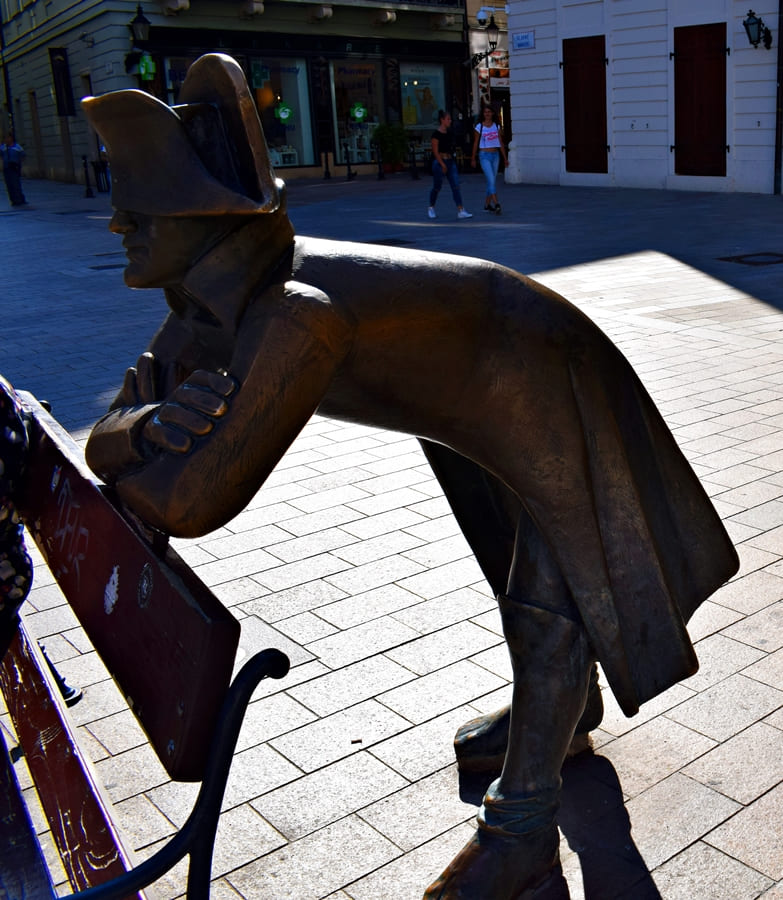 Statue of the Napoleonic soldier

The last statue I could see is the one of Hans Christian Andersen in Hviezdoslavovo Namestie. Many websites erroneously claim it is the statue of Lewis Carroll, writer of Alice in Wonderland.In reality, it is the Danish writer Andersen, depicted with a snail on his feet, a hat in his hand and a child on his shoulder. 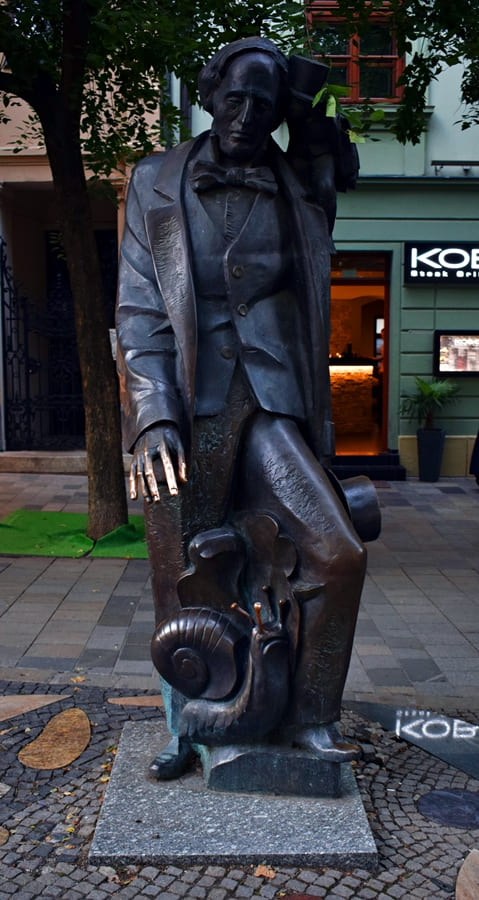 These are only the most famous statues, but walking through the center of Bratislava, others can also be found.

Hlavné Namestie is the main square (this is also the literal translation) of the old city. It is a square with a very relaxed atmosphere, with many bars and restaurants. In the past, however, it was the center of city life: the market, religious and civil feasts and executions took place here. Here you can find the old town hall, which houses the Museum of the city of Bratislava since 1868, no longer covering the institutional function this building had been having for over five centuries. The old town hall also has a tower, from which you can see a view over the historical center of Bratislava. 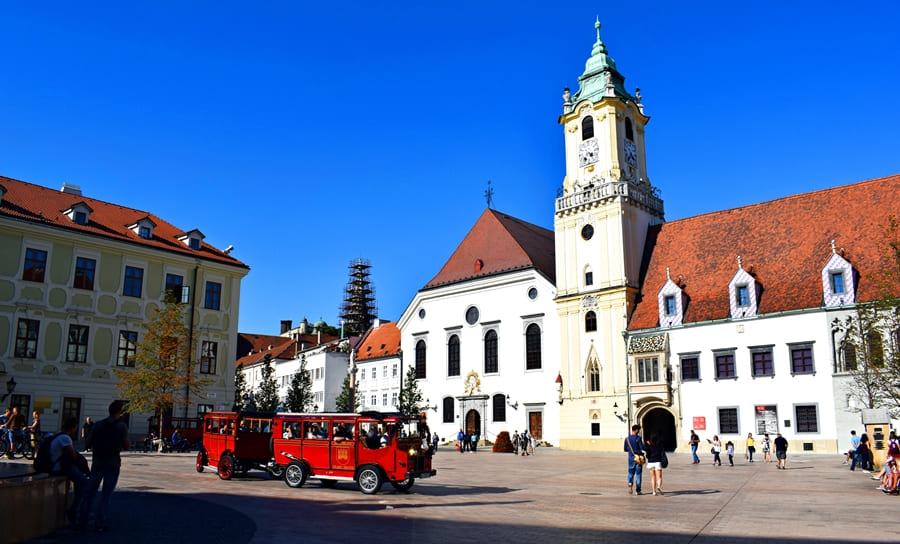 In Hlavné Namestie, in addition to the statue of the Napoleonic soldier resting on a bench, there is also the fountain of Maximilian or Roland, commissioned by King Maximilian II after a bad fire had destroyed the square in 1572. According to legend, the statue of Roland every year on New Year’s Day descends from the fountain and begins to walk.

Leaving a little from the center of Bratislava – about ten minutes walk – you arrive at St. Elizabeth’s Church, more known to tourists as the Blue Church. It won’t take you long to understand the reason for this name. The church, in fact, is in Art Nouveau style, with a blue facade. But not just the facade is blue, even the interior is of the same colour. It gave me the impression of a cake covered with blue colored fondant, with decorations made of colored sugared almonds (in the reality they are mosaics). Look with your own eyes! 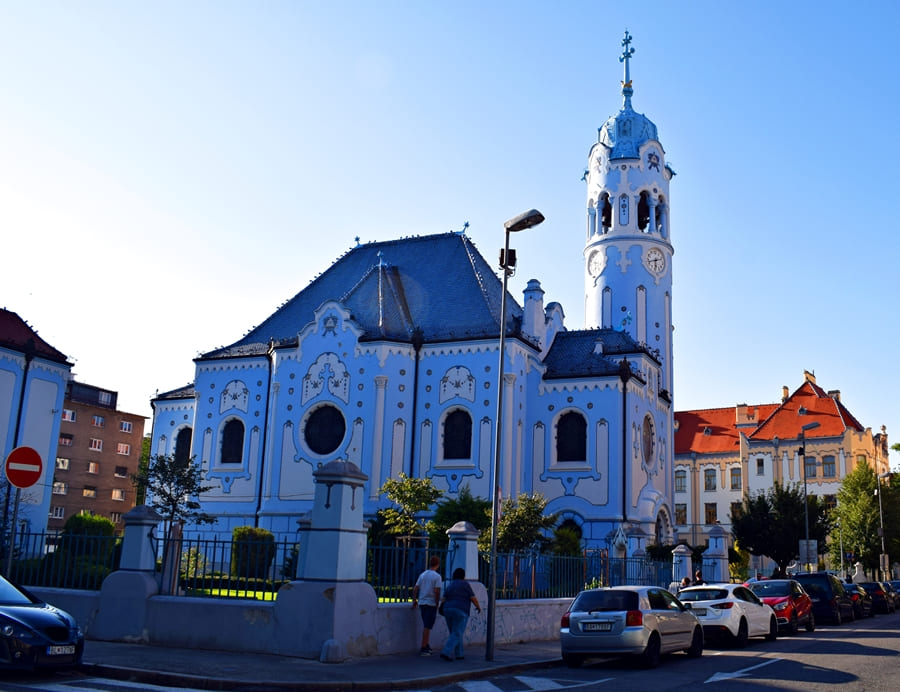 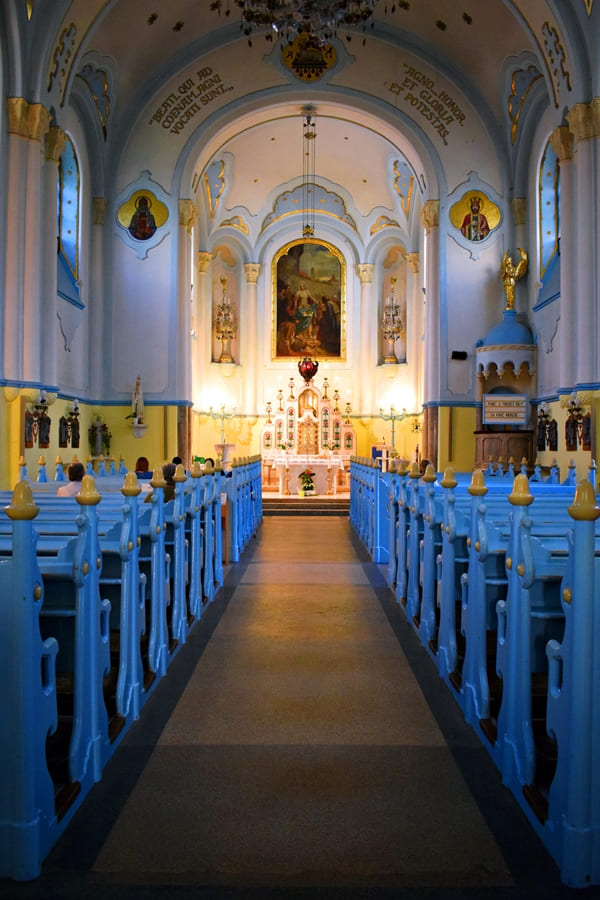 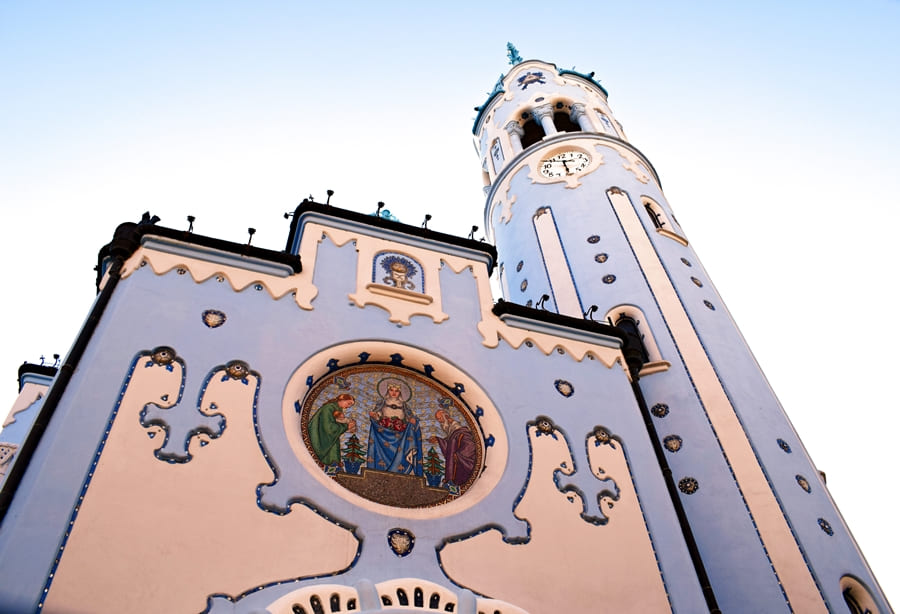 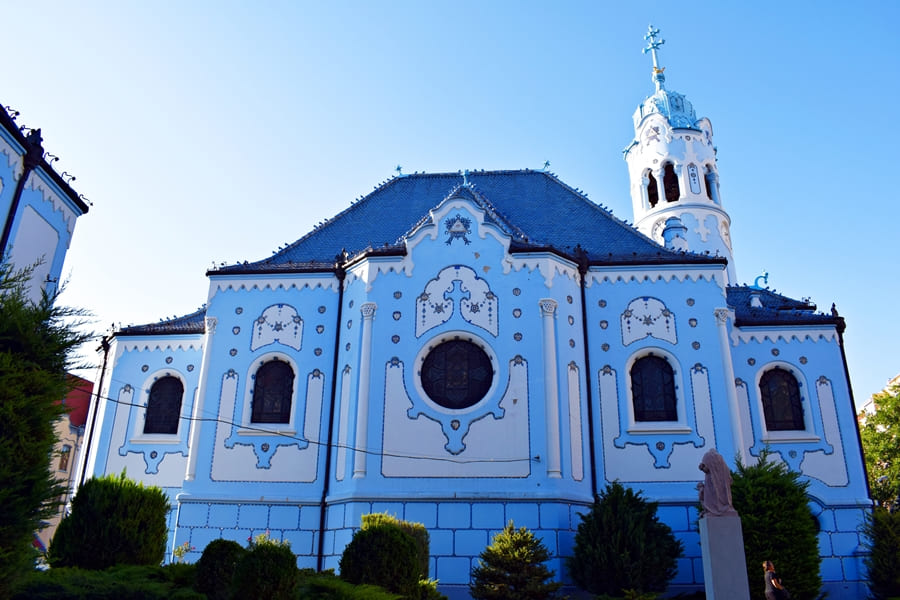 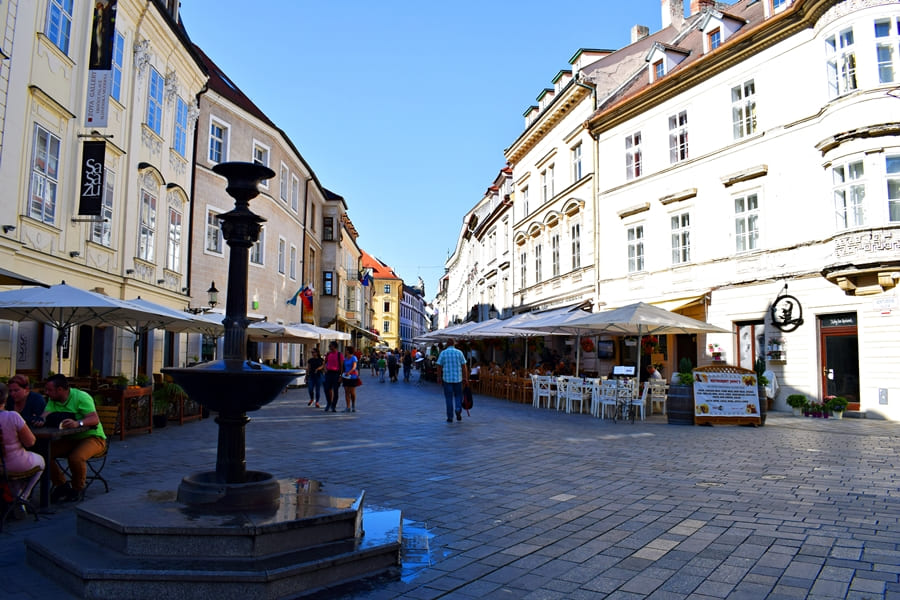 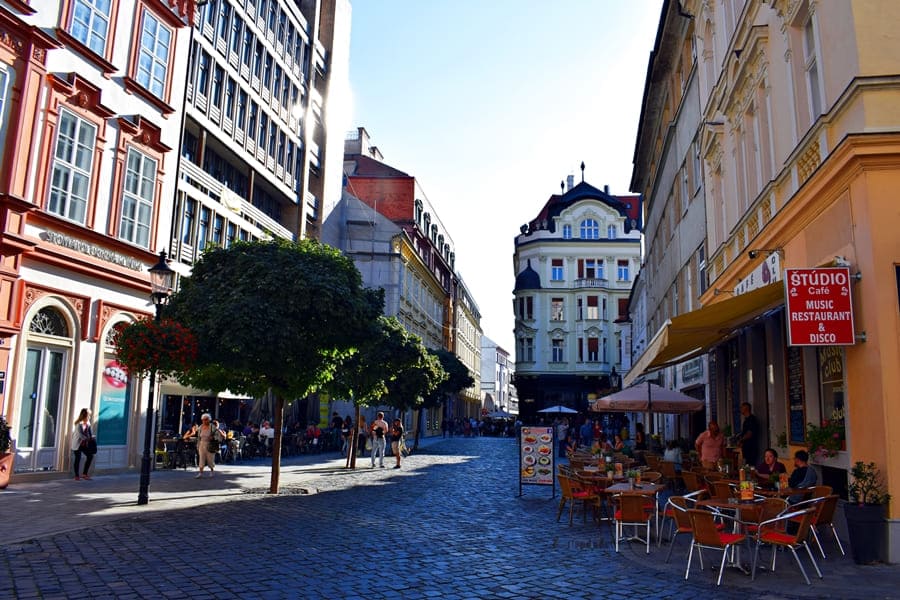 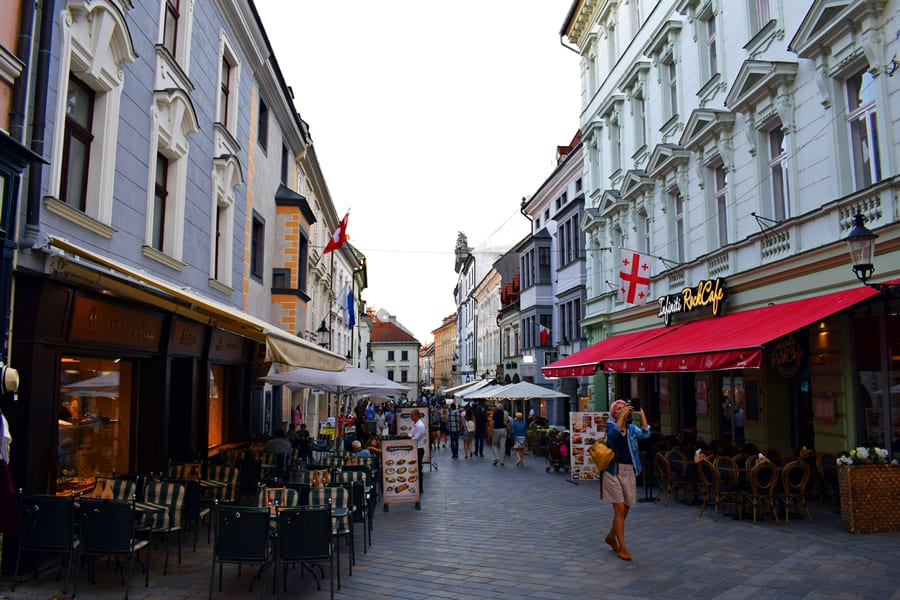 Back in the center of Bratislava, we abandoned ourselves to a walk through its streets, passing through St. Michael’s Gate. It is the only gate of the ancient medieval fortications still existing. Today it houses the Museum of Weapons and Fortifications. Climbing to the top, you can see a beautiful view from above. 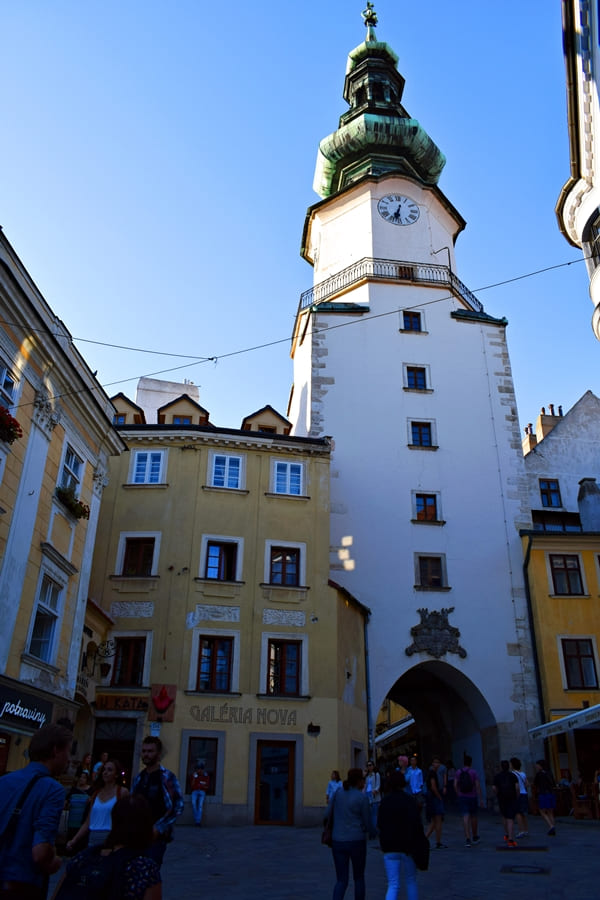 Last stop of this walk in Bratislava was the large square dedicated to the father of Slovak poetry, Hviezdoslav.It is a very popular square in Bratislava, with many cafes and bars, lots of trees and flowerbeds.Here you find the Slovak National Theater, the fountain of Zeus (right in front of the theater) and the statue of Andersen I mentioned above. 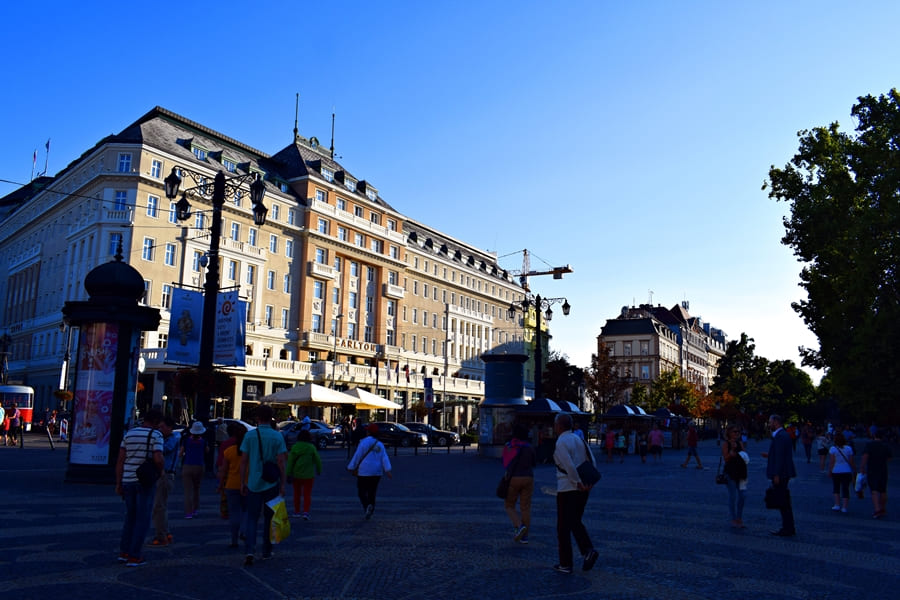 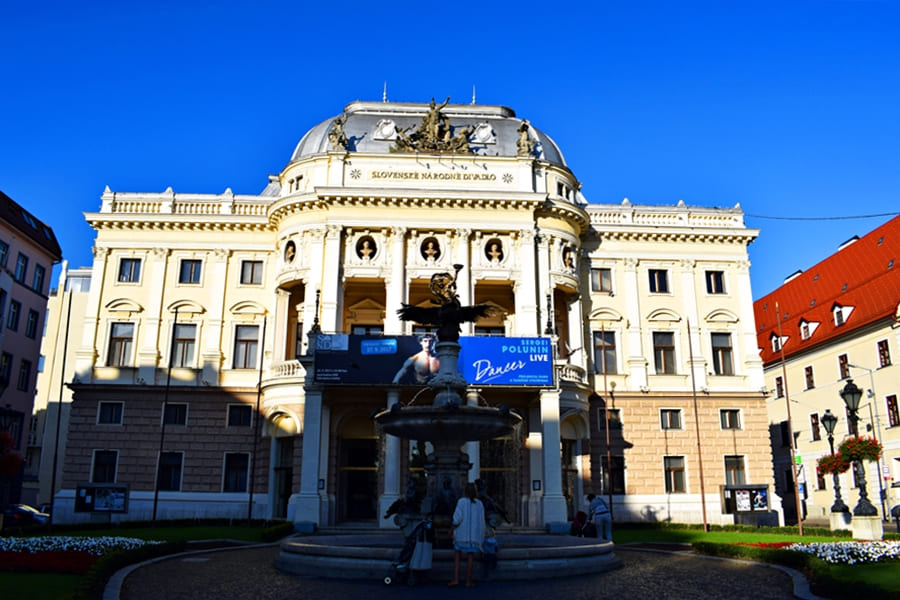 It was sunset time and we had to go to the station to take the train to Vienna. I really enjoyed my time spent in Bratislava and was so sorry to leave it. The bus passed on the SNP Bridge and it was as if the city wanted to say “Goodbye!”, giving us the sunset on the Danube you see in the picture below. 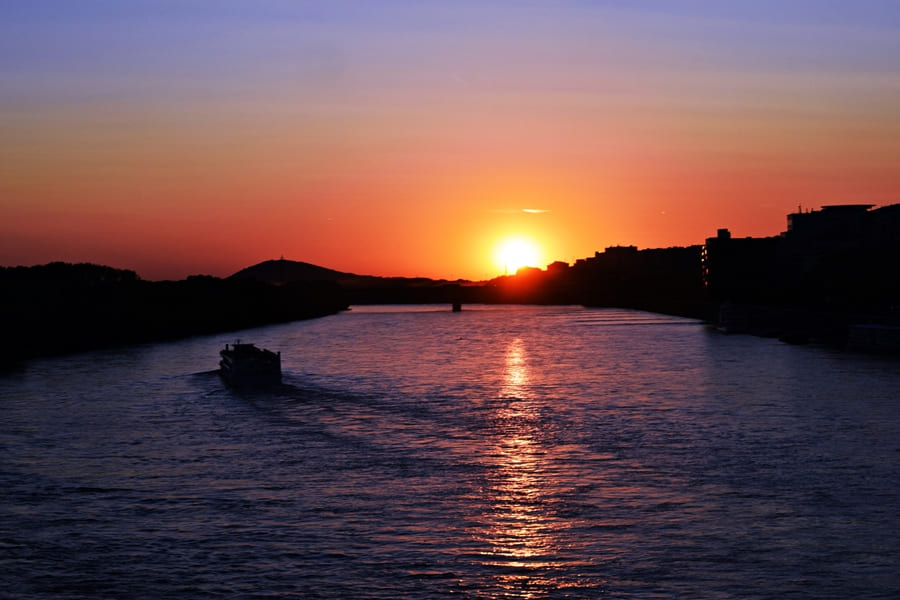 Sunset from the SNP bridge, Bratislava

Here is a video of the day, taken from my YouTube channel: