The second day of my trip to Copenhagen started with a half-day gateaway outside the city. The destination was Frederiksborg Castle in Hillerød, a town about forty kilometers away from Copenhagen.

The history of Frederiksborg Castle

Frederiksborg Castle was built by King Christian IV in the 17th century to replace another building that stood there. The sovereign commissioned the construction of this new palace to Flemish artists, who built a Dutch Renaissance-style castle on three islets of Lake Slotssøen. Frederiksborg Castle became the largest Renaissance residence of Scandinavia.

In 1659, during the Second Northern War, the castle was occupied by the Swedes, who took away many of the works of art as compensation for war.

After the death of Christian IV, the castle ceased to be a royal residence, continuing to be used for ceremonials. There, for example, the coronations of the sovereigns of Denmark between 1671 and 1840 took place.

In the 19th century, Frederinksborg Castle returned to be a royal residence under the reign of Frederick VII. One evening in 1859, just as the king was in the castle, a fire broke out, damaging the castle and destroying many of its works of art. The reconstruction began immediately, thanks to the support of some philanthropists, including Jacob Christian Jacobsen, founder of the Carlsberg brewery.

How to get to Frederiksborg Castle from Copenhagen

The ticket price for Hillerød is 92 Danish kroner (about 12.30 euros) each way. If you have purchased the Copenhagen Card, you can go to Hillerød for free. In fact, the Copenhagen Card not only offers the use of public transport within the city of Copenhagen, but you can also travel free for the entire region of the Danish capital.

Once we arrived in Hillerød, we could choose to reach Frederiksborg Castle by bus or on foot, passing through the village and walking around the lake overlooking the castle. Of course, we chose the second option. It was a good opportunity to walk through the narrow streets of Hillerød, a charming, very quiet and relaxing village. 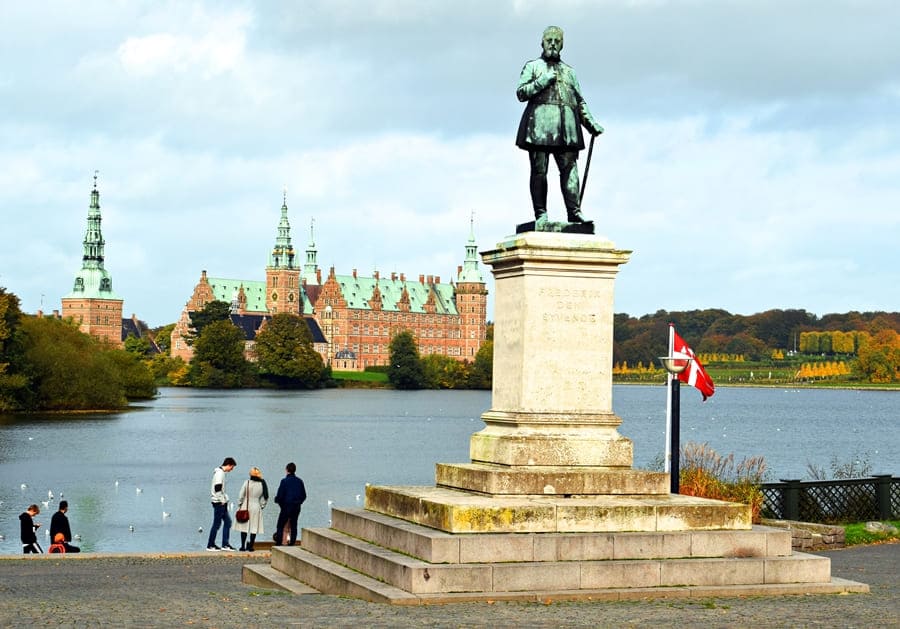 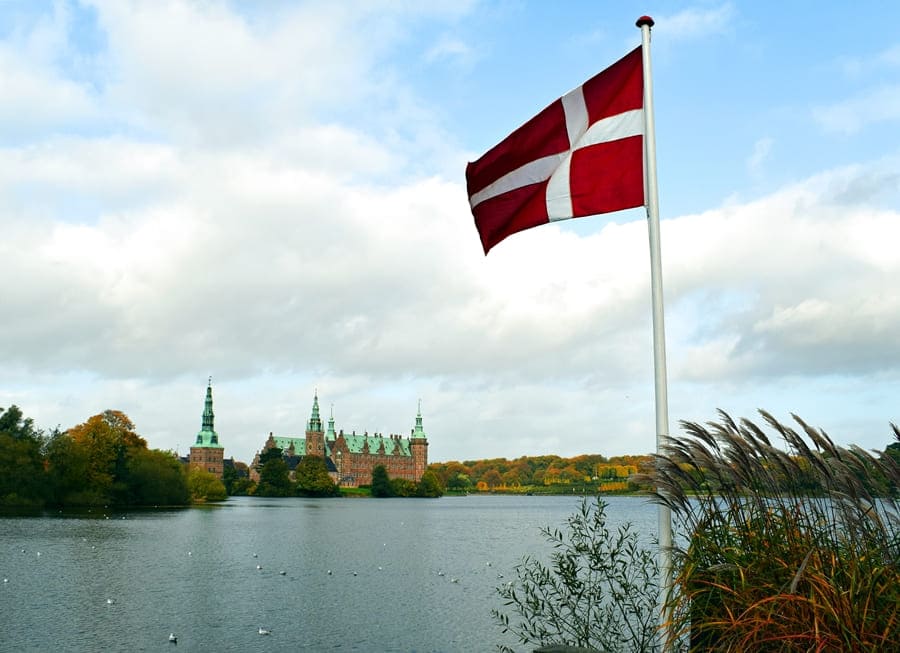 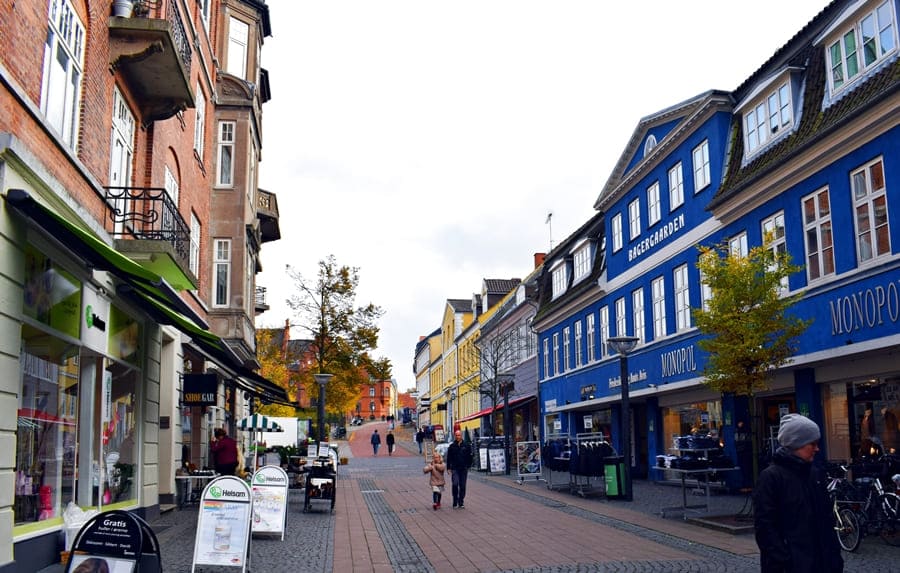 After crossing part of the village of Hillerød, we arrived on the shores of Lake Slotssøen. As soon as we arrived, the castle presented itself before our eyes and, although the sky was very cloudy, the landscape was truly magnificent. It is no coincidence that it is one of the most photographed landscapes in Denmark. Along the path, there are small piers facing towards the castle and it is possible to admire it from them. 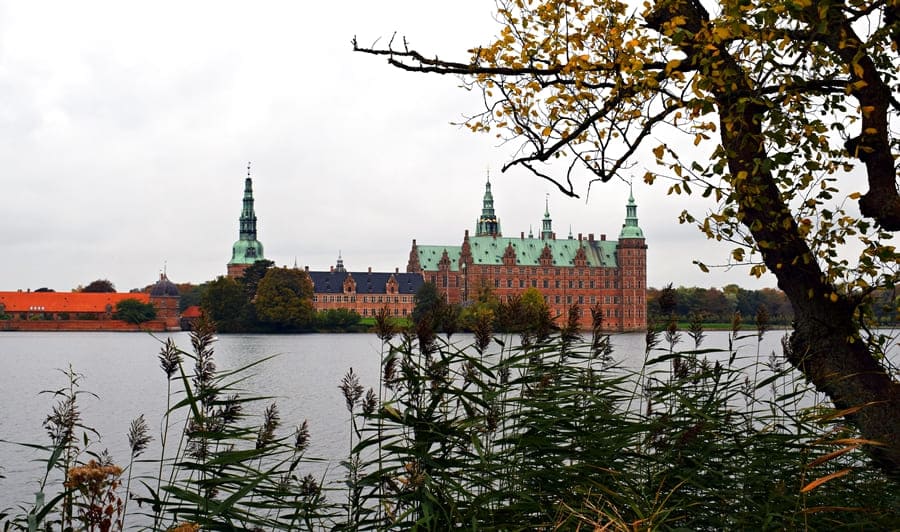 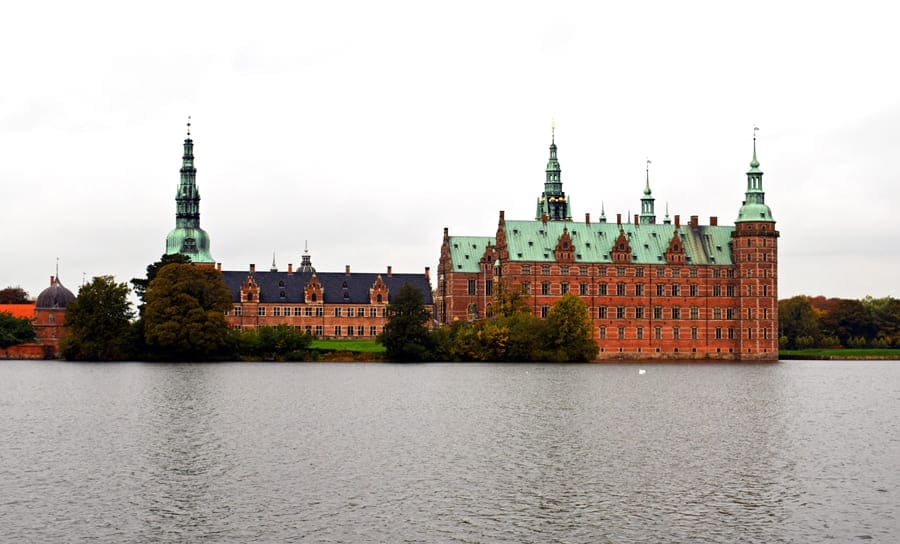 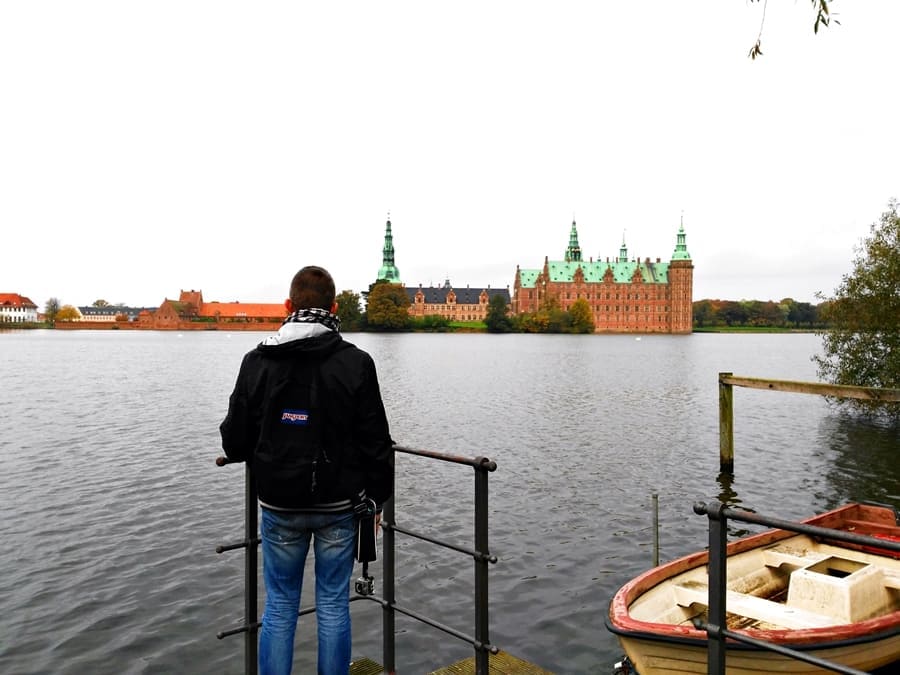 From the path running along the lake, you enter directly into the Baroque-style castle gardens. To access the castle, you must cross a bridge (remember that the castle is built on three islets). Once inside the courtyard, you can see that all the buildings making up the complex are made of red bricks. 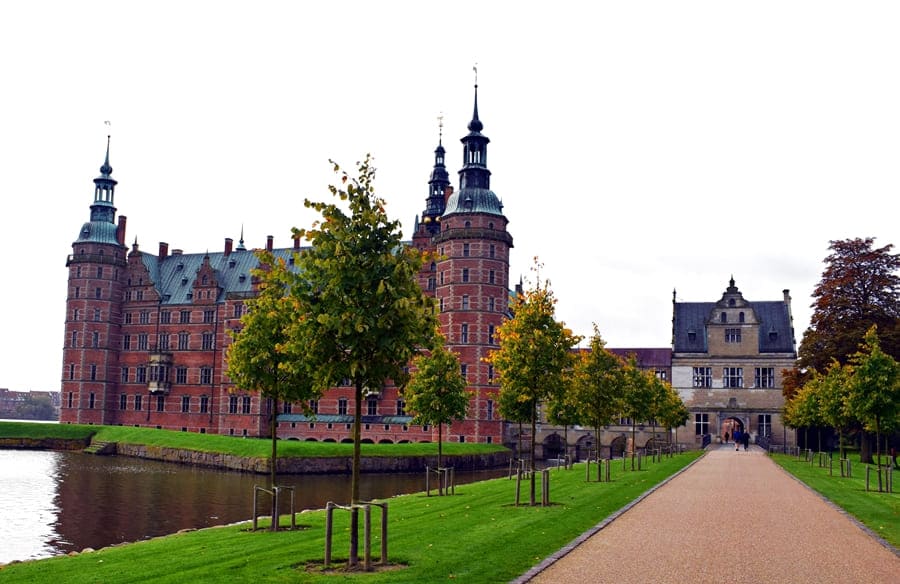 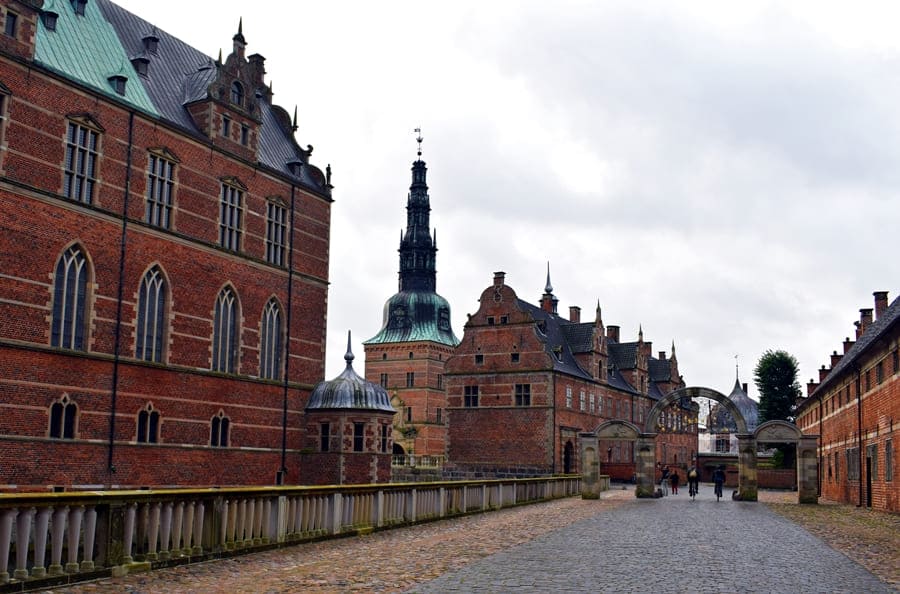 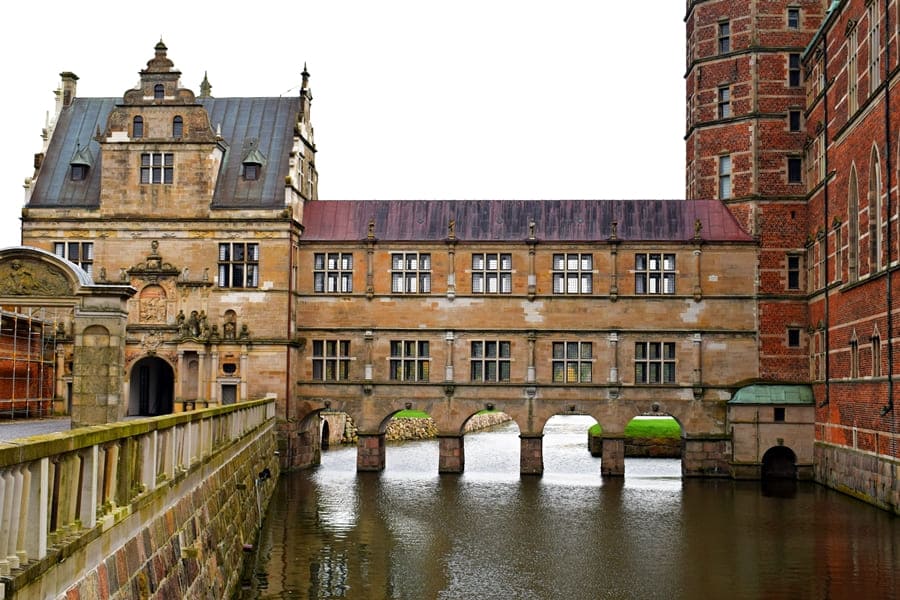 You get to the Neptune Fountain, which is located in the square in front of the main entrance of the castle. The one we see today is a faithful copy of the 1620s fountain, taken away by the Swedes during the period of occupation. This was donated by Jacobsen during the reconstruction after the fire. 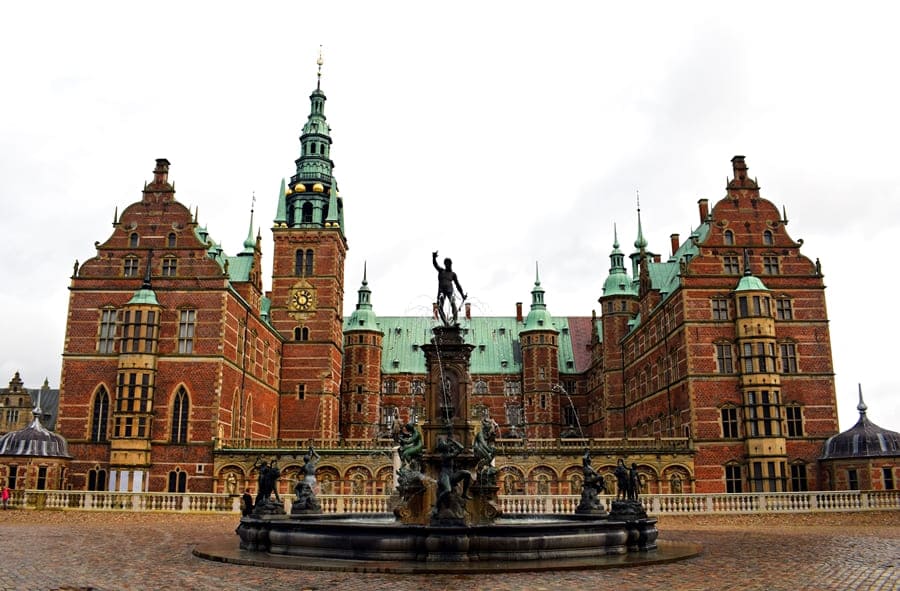 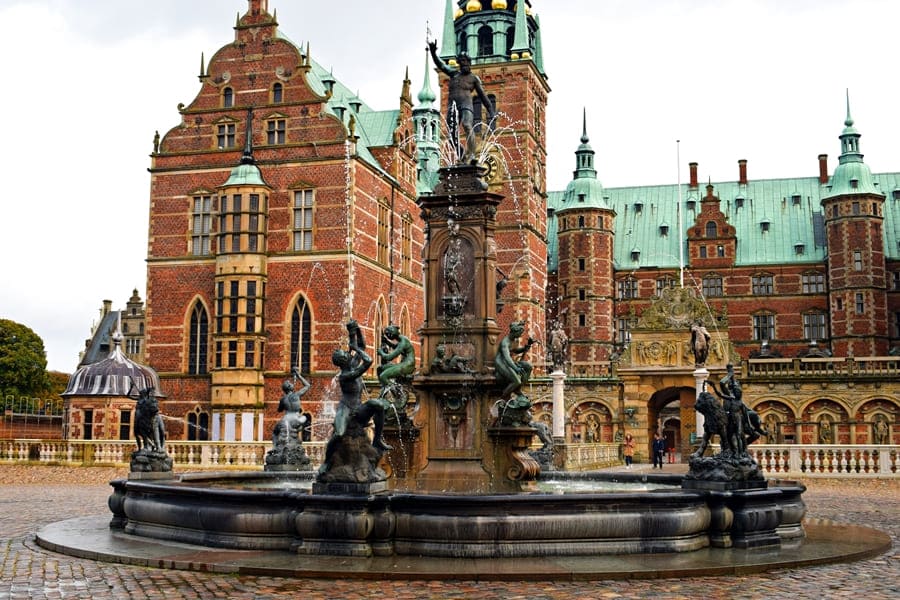 The interior of Frederiksborg Castle

If outside the castle had impressed me a lot, the interior didn’t disappoint the expectations at all. Frederiksborg Castle houses the National History Museum. The idea of ​​opening the museum came to Jacob Christian Jacobsen, in the aftermath of the great fire that seriously damaged the castle. The museum tells five centuries of Danish history through all the works it contains: paintings, portraits, busts and reliefs. Some rooms of Frederiksborg Castle can’t be missed:

On the ground floor you’ll find “The Rose”, one of the very first rooms that you meet along the way. During the reign of Christian IV, this room was called the “Hall of the Knight” and was used as a dining room for the king and the court people. After the fire in 1859, this room was restored faithfully following the drawings and paintings of the time. 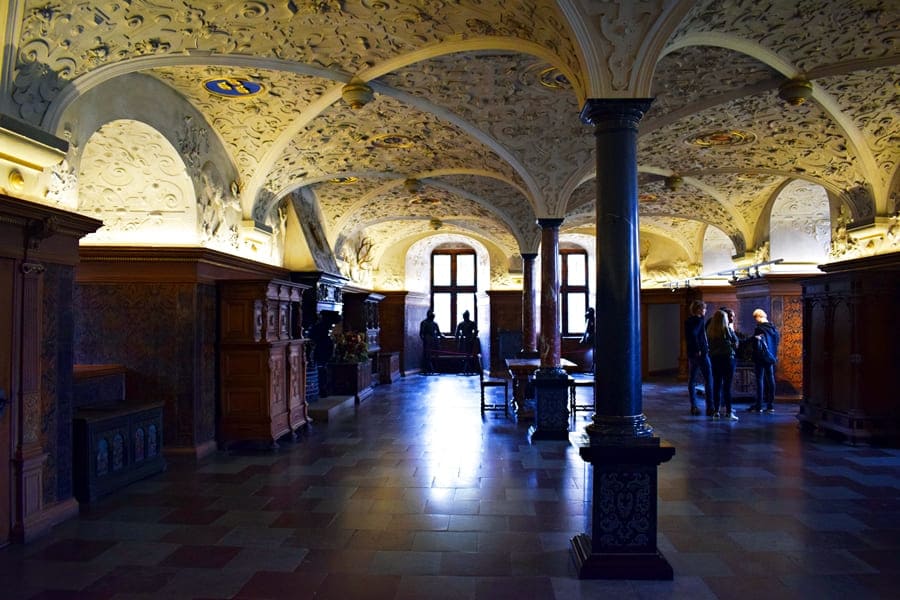 On the first floor you meet the Chapel of Frederiksborg Castle, dating back to 1617 and which fortunately emerged from the 1859 fire without suffering damage. Between 1671 and 1840 the Danish kings were crowned in the castle chapel and from 1693 Christian V transformed it into a chapel for the two Danish orders: the Order of the Elephant and the Order of Dannebrog. The walls of the chapel are covered by hundreds of crests belonging to royal and noble families from around the world. 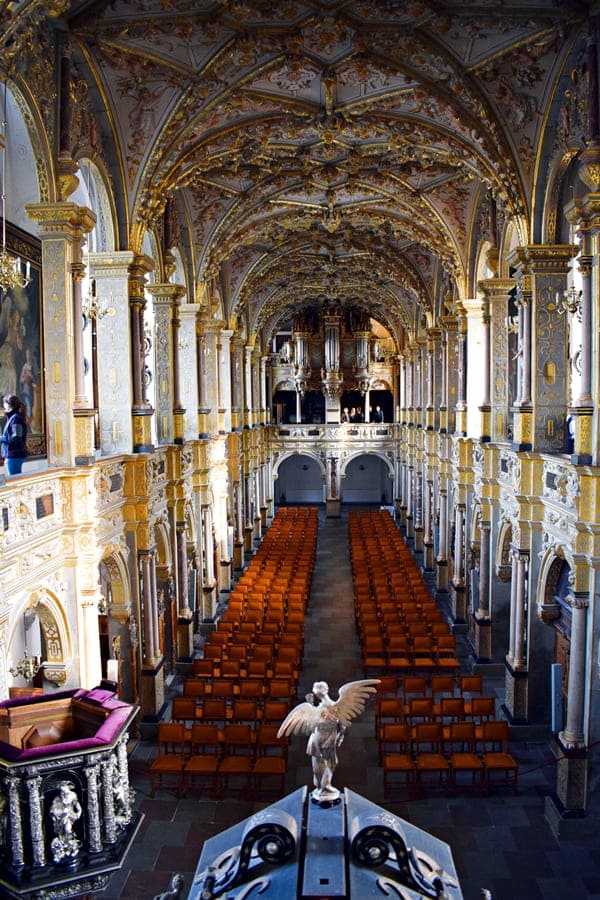 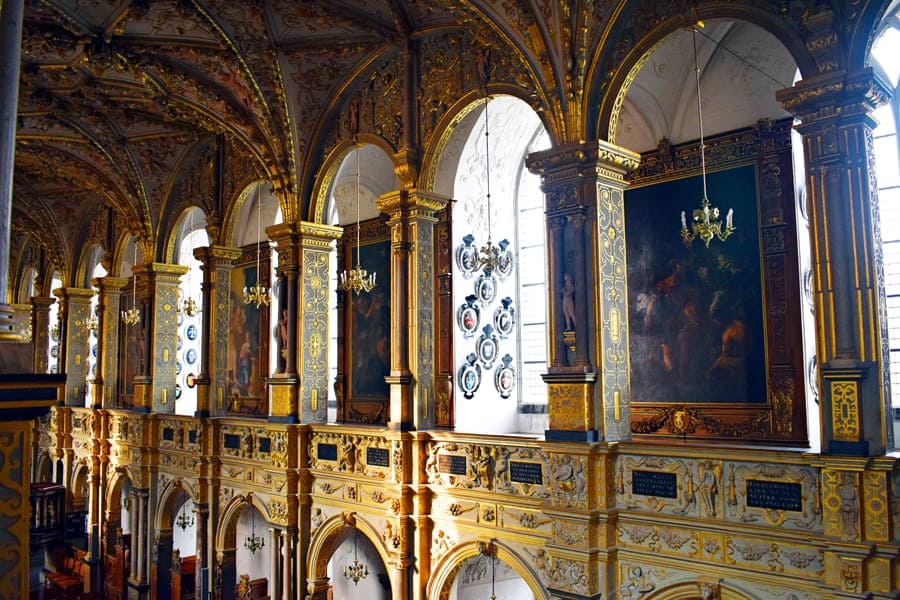 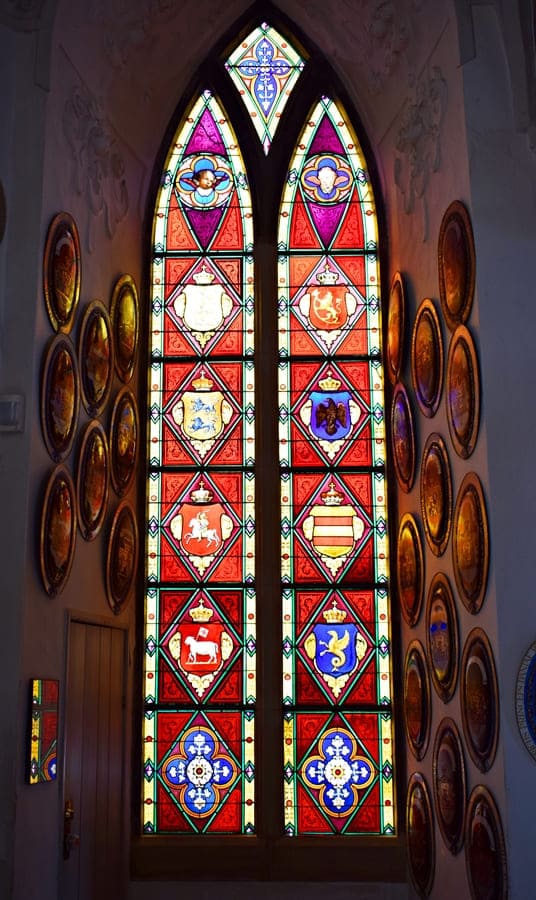 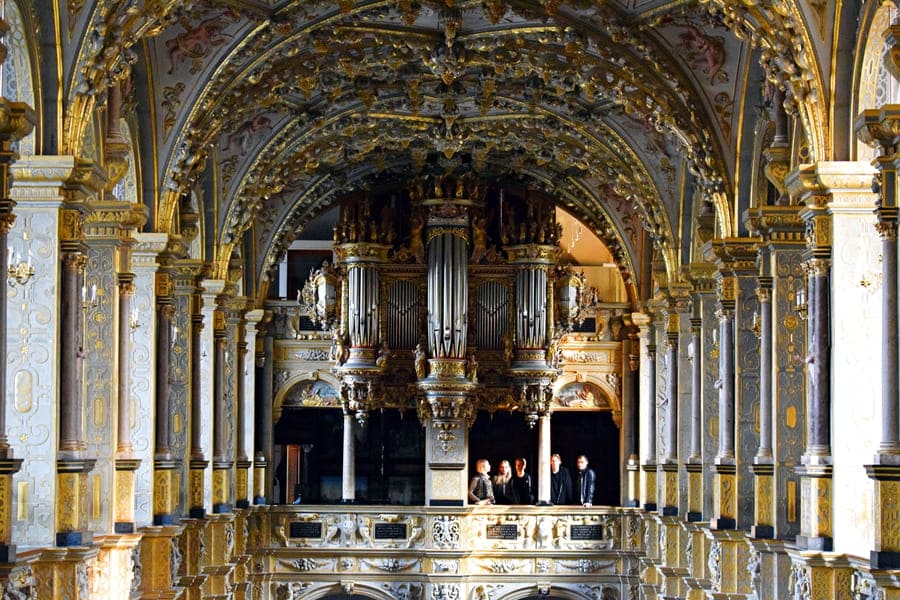 The precious stuccos decorating the ceiling, walls and the organ strike the visitor. The organ is the oldest in Denmark, counts a total of 1,001 pipes and is richly decorated with ebony, ivory and silver. 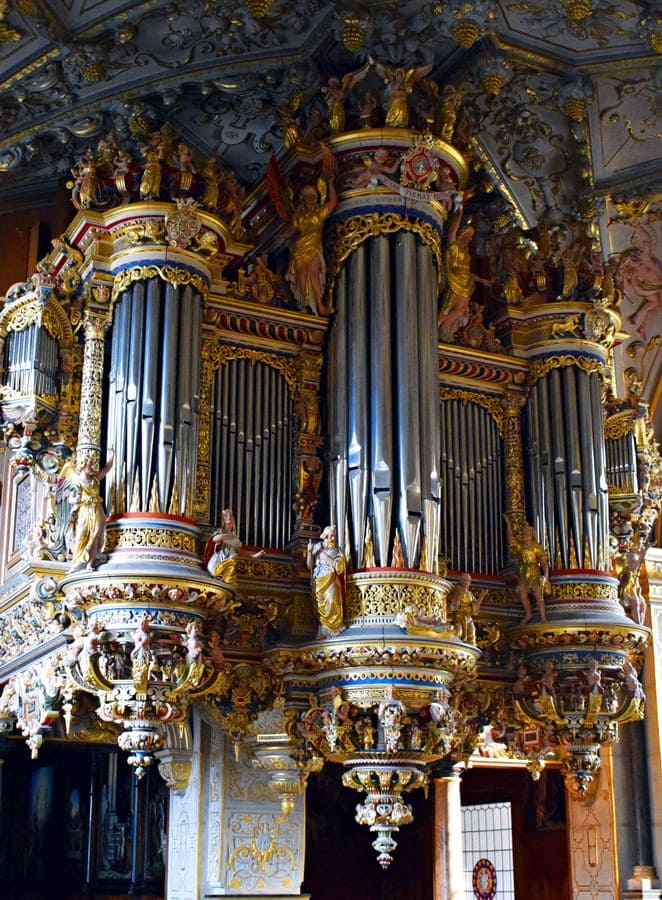 Another room worth a visit is the Audience Chamber, which was spared from the fire in 1859. It was decorated by Christian V’s master builder Lambert van Haven, combining the Renaissance style with the Baroque one. Before arriving at the chamber, it is very nice to cross the corridor stuccoed with vines, creepers and rosettes. 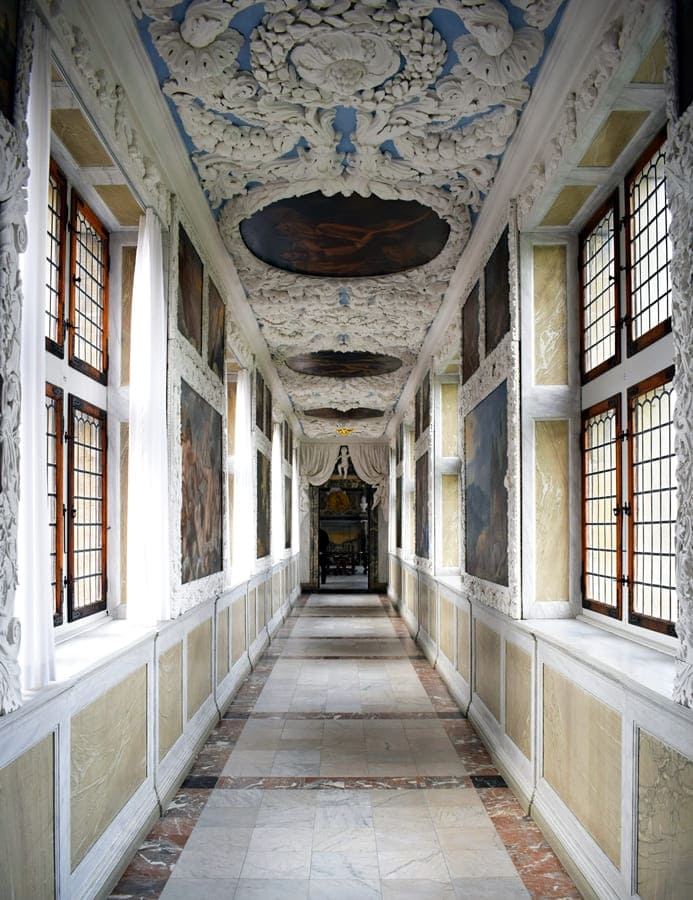 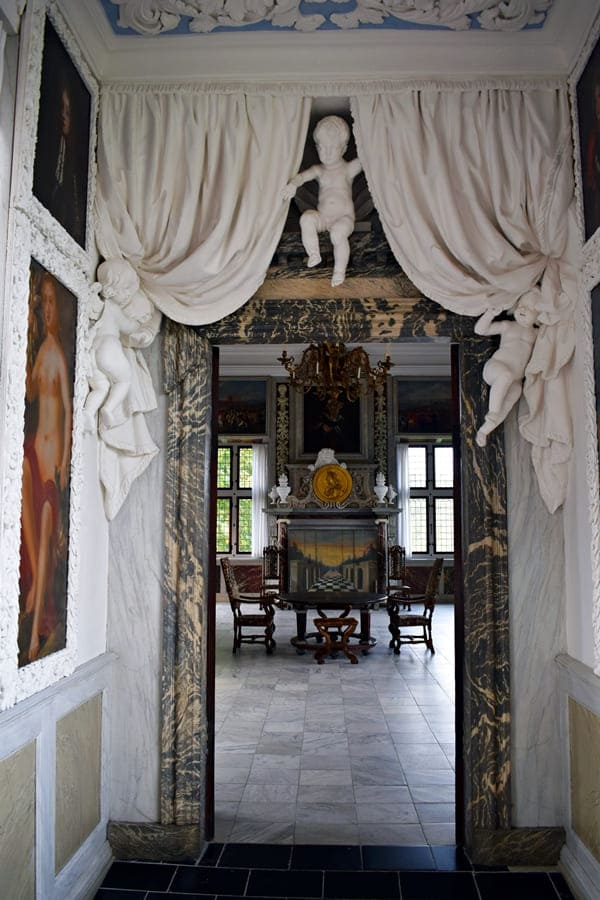 The central dome designed by van Haven bears Christian V’s motto, Pietate et Justitia (Piety and Justice) and is decorated with allegorical paintings of a Christian queen, a black man, a Turk and an American Indian representing Europe, Africa, Asia and America. 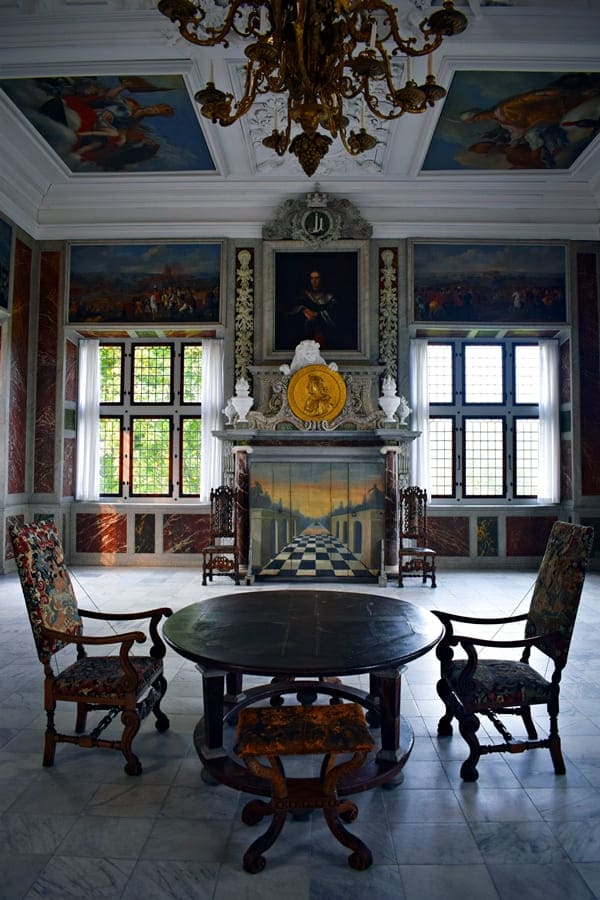 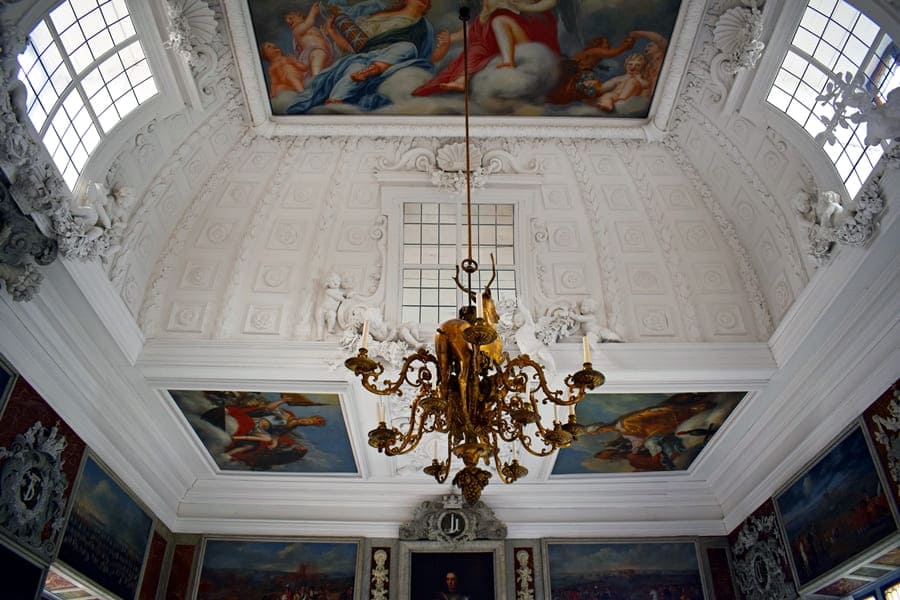 It is located on the second floor and was used for banquets and balls. Unfortunately, it was severely damaged in the 1859 fire and subsequently rebuilt. On the walls of the Great Hall you can see velvet tapestries depicting events from the life of Christian IV and portraits of the Danish royal family. 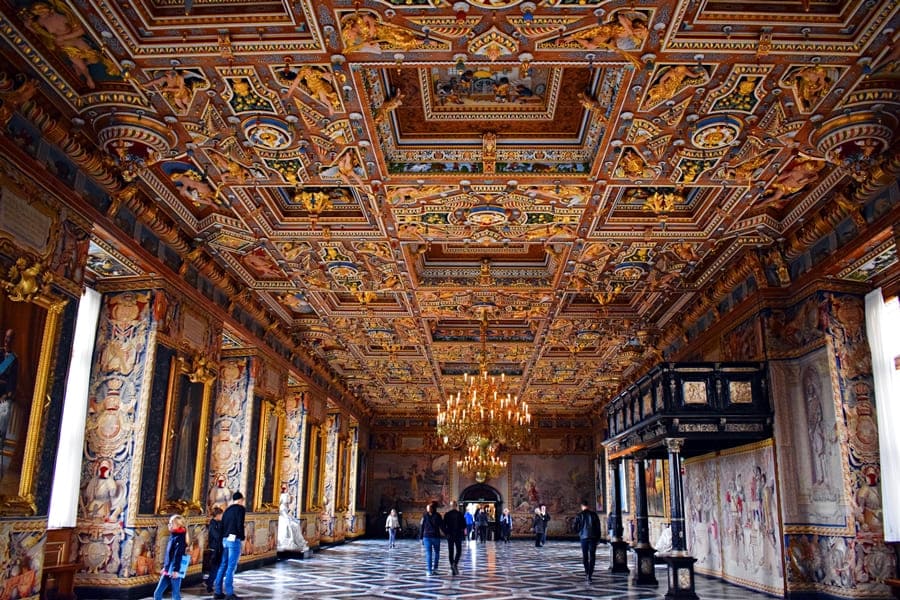 Of course these are just some of the rooms you can visit inside Frederiksborg Castle. In fact, about seventy rooms can be visited, where several works of great value are exposed. After the visit of the castle, you can’t miss its beautiful baroque gardens. 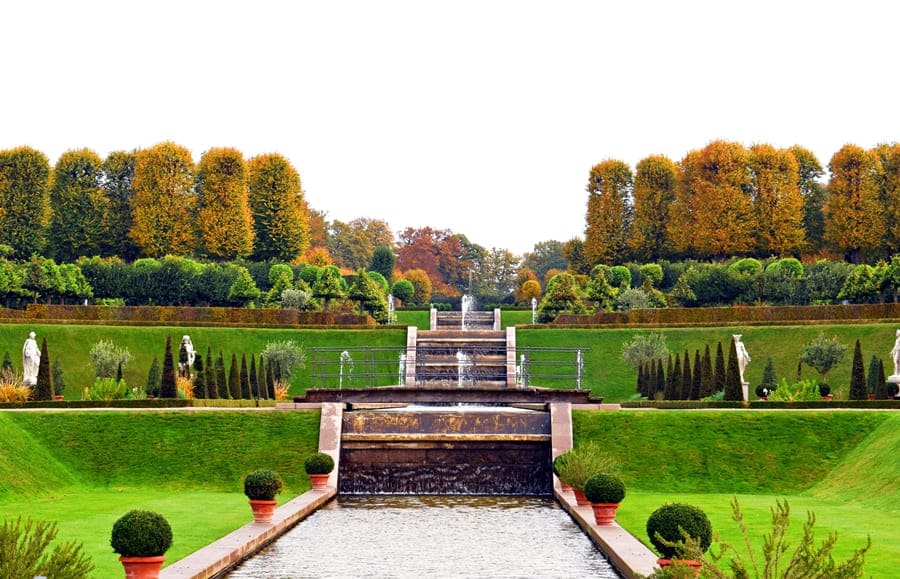 As already stated in detail above, the most convenient way to reach Frederiksborg Castle is by train. In fact, trains from Copenhagen to Hillerød are very frequent (one every 10 minutes). You can buy the train ticket on the official website of the Danish railways or at the station vending machines (remember that you travel free with the Copenhagen Card).

Frederiksborg Castle is open 365 days a year (including Christmas and New Year) and has the following opening hours:

The ticket price is 75 Danish crowns (about 10 euros) for adults and 20 crowns (2.70 euros) for children. For further information, you can consult the official website.If you have purchased the Copenhagen Card, admission to Frederiksborg Castle is free. In both cases, whether you buy the ticket or enter for free, you will be given an audioguide. 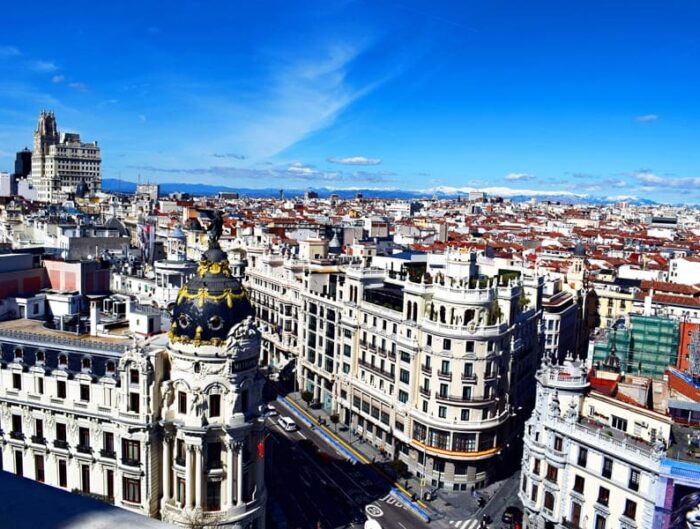