Here we are talking about the last day of my trip to Vienna. The first part of the day was dedicated to the exploration of the Vienna of the Secession movement – and beyond. You can meet many Art Nouveau buildings while walking through Vienna. However, there is an area of ​​the city, where the evidences of the Vienna Secession movement are more visible: I am talking about Karlsplatz and its surroundings. 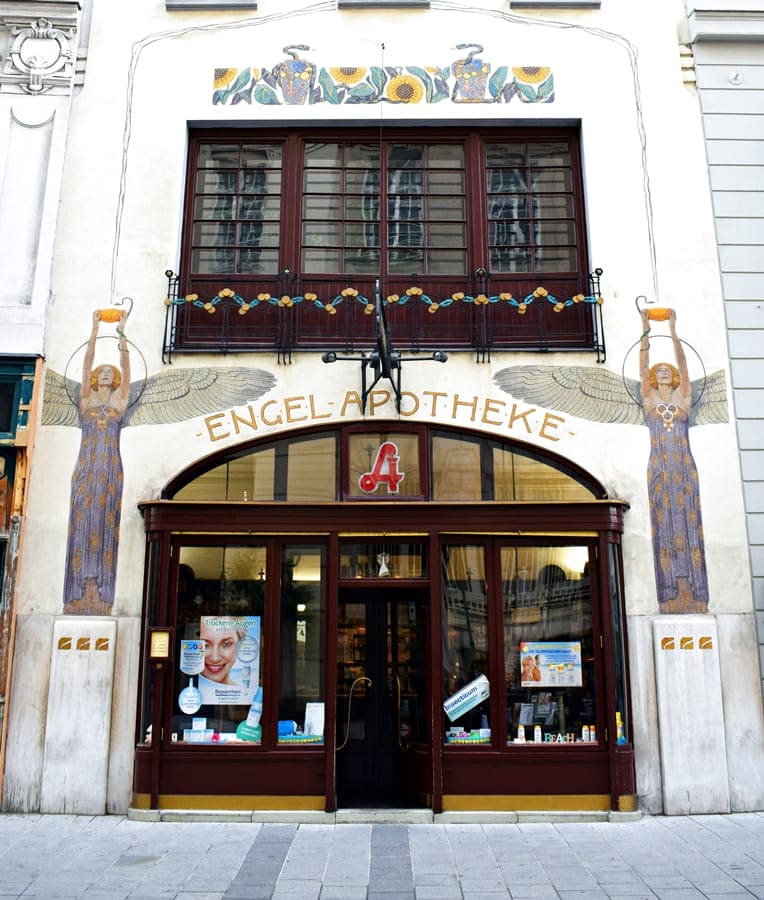 Engel Apotheke, Art Nouveau pharmacy in the center of Vienna

The Vienna Secession indicates a style that developed between the late 19th and early 20th centuries, a period when some Viennese artists broke away from the Wiener Künstlerhaus (House of Viennese artists). It is a style in which sensuality and aesthetic abundance dominate and is the “Austrian version” of the Art Nouveau that was conquering Europe at the time.

The artists (painters and architects) who gave life to this new artistic movement were 19, including Gustav Klimt, Egon Schiele, Otto Wagner and Koloman Moser. They founded a venue where to meet and exhibit their works: the Secession Building.

It was built by Joseph Olbrich in 1898 and is today one of Vienna’s main attractions. It is located a few steps away from Karlsplatz and looks like a whitewashed building, on top of which a pierced dome with about three thousand golden laurel leaves stands, which contrasts with the color of the rest of the building. This dome naturally illuminates the interior spaces, thanks also to the skylights and windows. 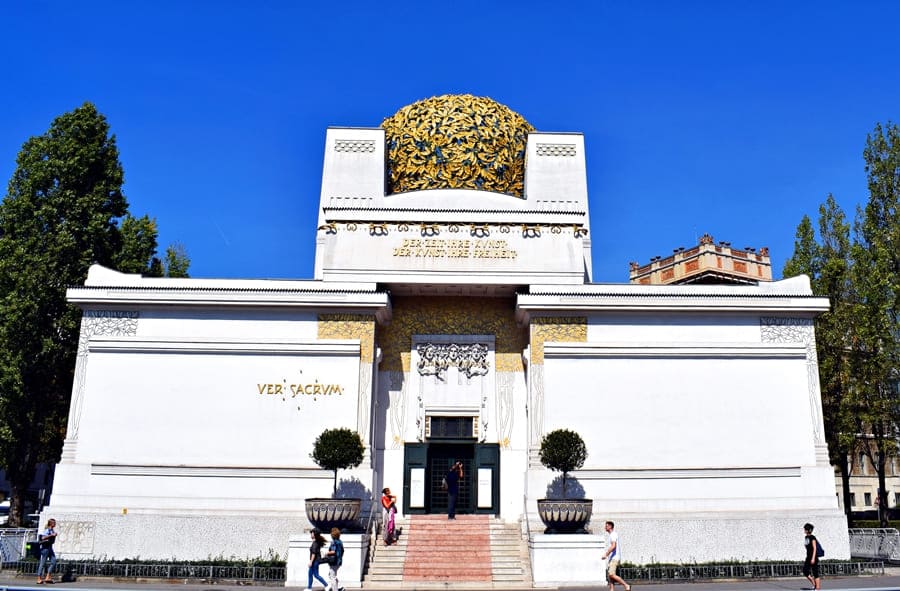 On the front side, above the entrance of the building, stands the motto of the Vienna Secession: ” Der Zeit ihre Kunst, der Kunst ihre Freiheit ” (To every age its art. To every art its freedom.). Among the various works on display, the main one is undoubtedly Klimt’s Beethoven Frieze. It is 34 meters long and is a pictorial interpretation of Beethoven’s Ninth Symphony. 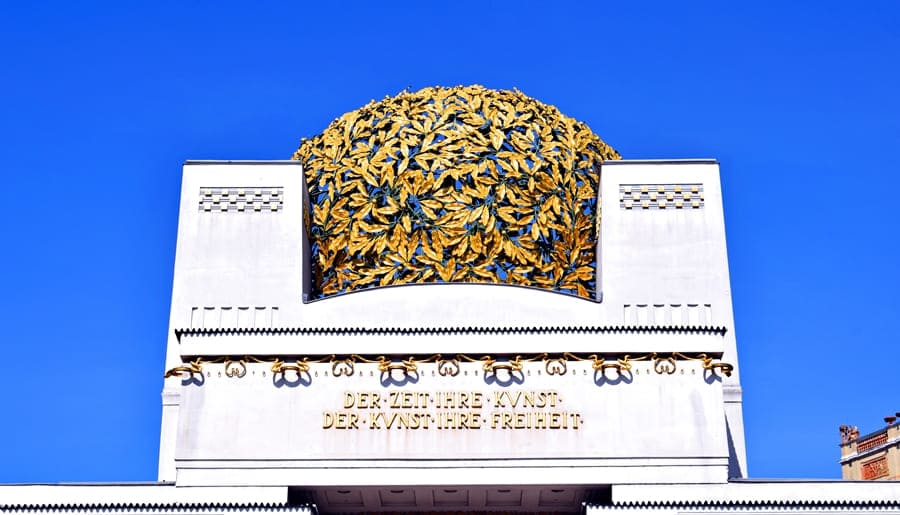 Dome of the Secession Building

Right next to the Secession Building you can find one of the most important markets in Vienna and the one most visited by tourists: the Naschmarkt. It is located on the basement of the river Wien, a tributary of the Danube, and stretches for about a mile.

This market came into life in the 17th century. At the time, milk was sold in bottles of ash wood. Some think that the name Naschmarkt derives from the ash wood with which the bottles were made (Asch in German), while others claim that it derives from the verb naschen which means to nosh. However, this market is defined by the Viennese “Belly of Vienna” and I really can’t argue with them, given the variety of products sold.

In the Naschmarkt there are about 120 stands and walking among these stalls means diving into a very pleasant mix of colors and perfumes from all over the world. In addition to flowers, fruit, vegetables, cheeses and baked goods, there are many stands selling exotic products at the Naschmarkt. Prepare your stomach because it will be impossible to leave the Naschmarkt without having tasted something. In fact, sellers will offer you everything and more and it will be hard to resist in front of many locals and restaurants in the Naschmarkt, which offer both typical Viennese cuisine, both Italian and ethnic.

If you go on Saturdays, you will also find the Flohmarkt, the flea market. Surely, in this case it will be more crowded with tourists. 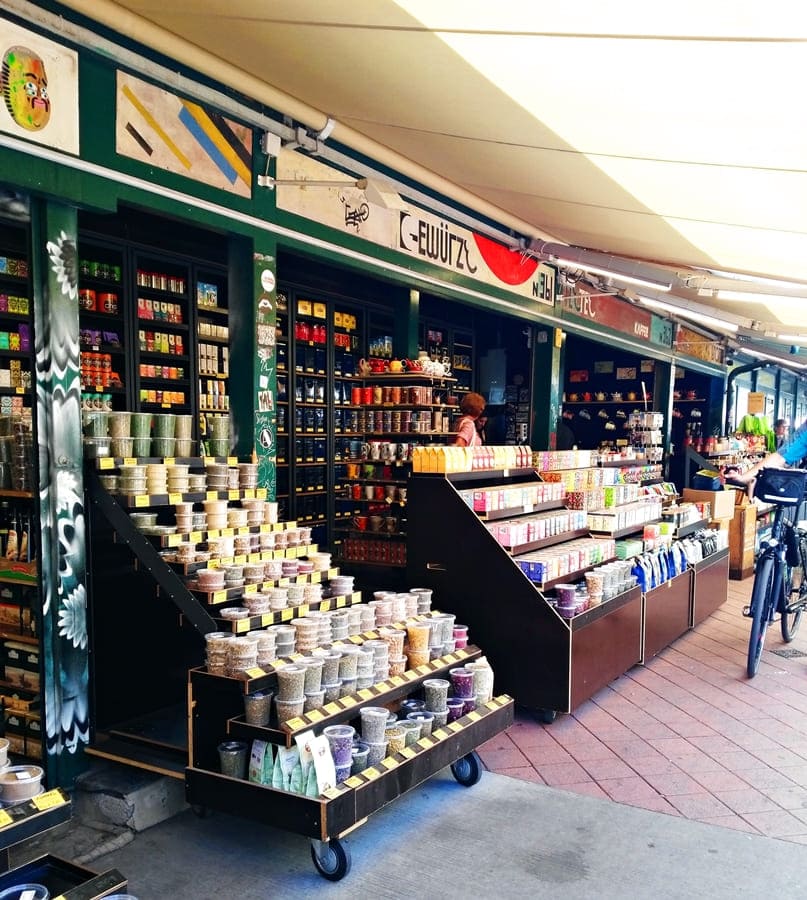 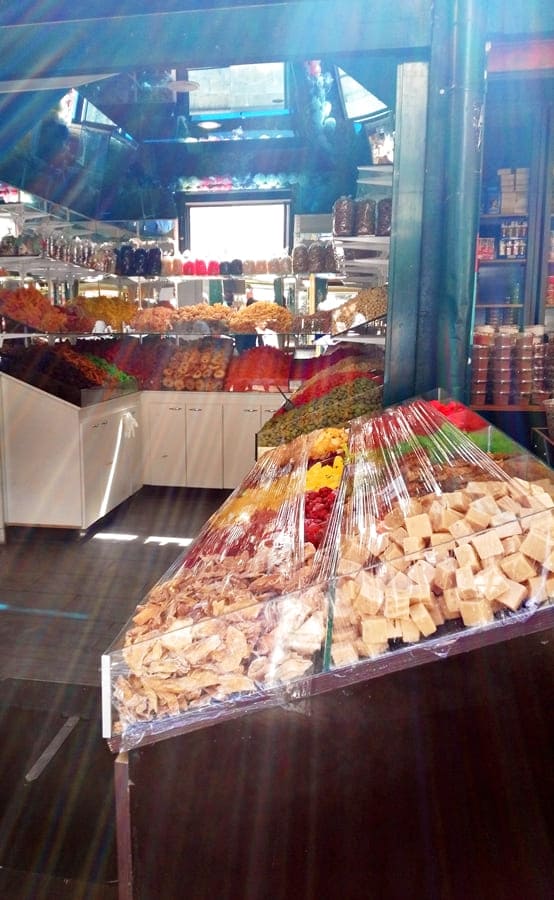 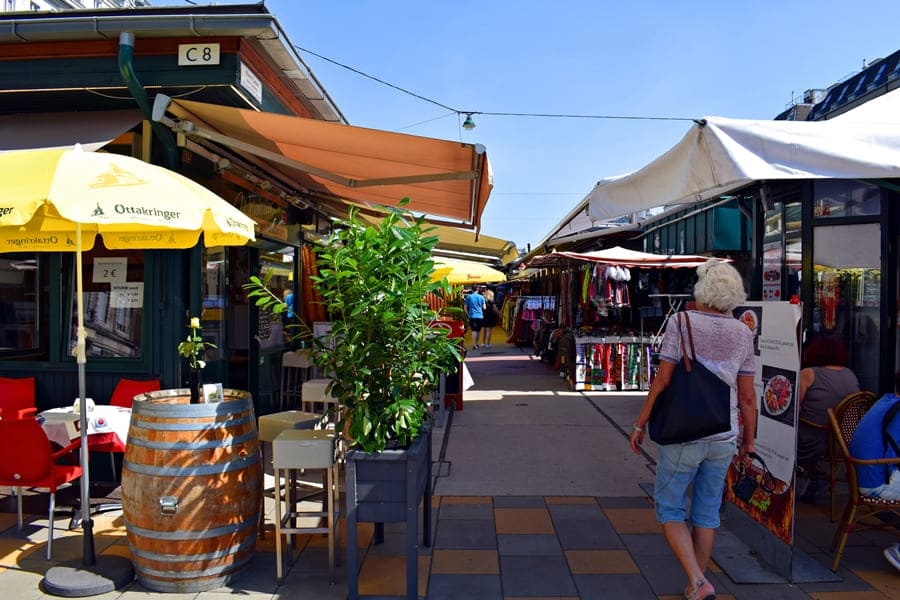 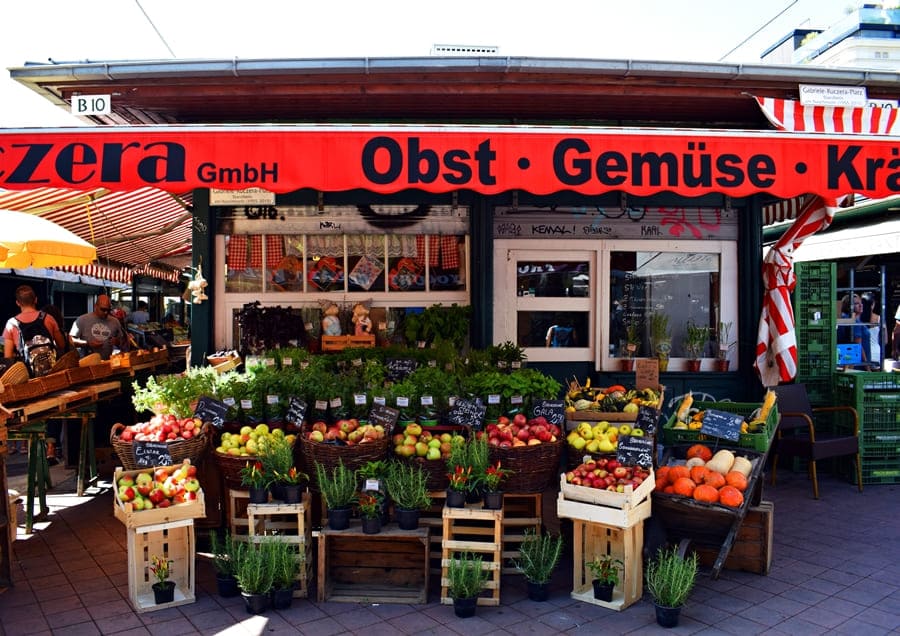 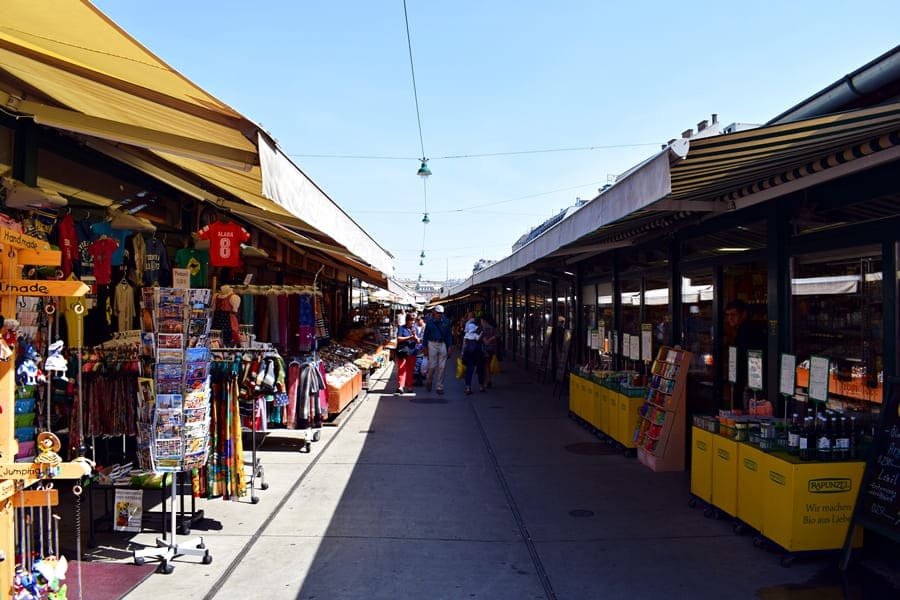 Other evidences of the Vienna Secession

Just at the end of the Naschmarkt, on the Linke Wienzeile, there are two buildings that deserve to be observed, because they bear witness to the Vienna Secession. The first, at number 38, is called Musenhaus (House of the Muses) and was projected by Otto Wagner. It is a white building with golden decorations made by Koloman Moser. The second one is at number 40 and was projectd by Otto Wagner as well. It is called Majolikahaus (Majolica House) because of the polychrome tiles with which the facade is decorated. 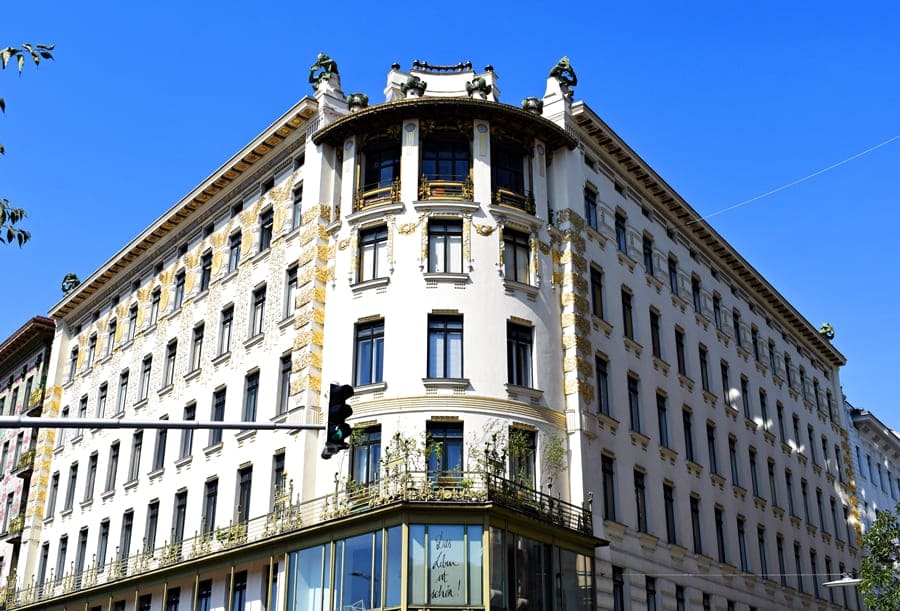 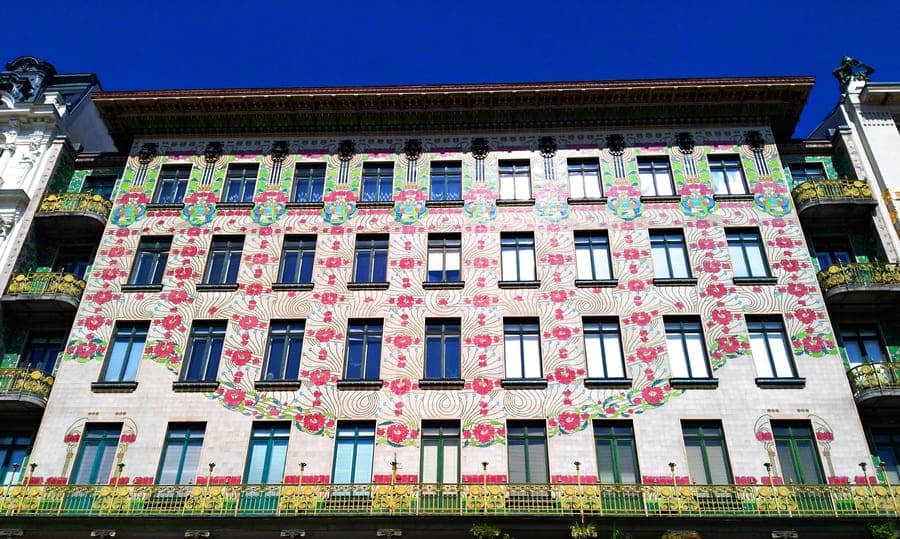 Returning to Karlsplatz, you can see another proof of the Vienna Secession: the metro station built by Otto Wagner. It looks like an iron skeleton in sight, white walls decorated with floral motifs and a barrel vault. Actually, there are two twin structures in Karlsplatz, but only one of them is still used today as an underground station. 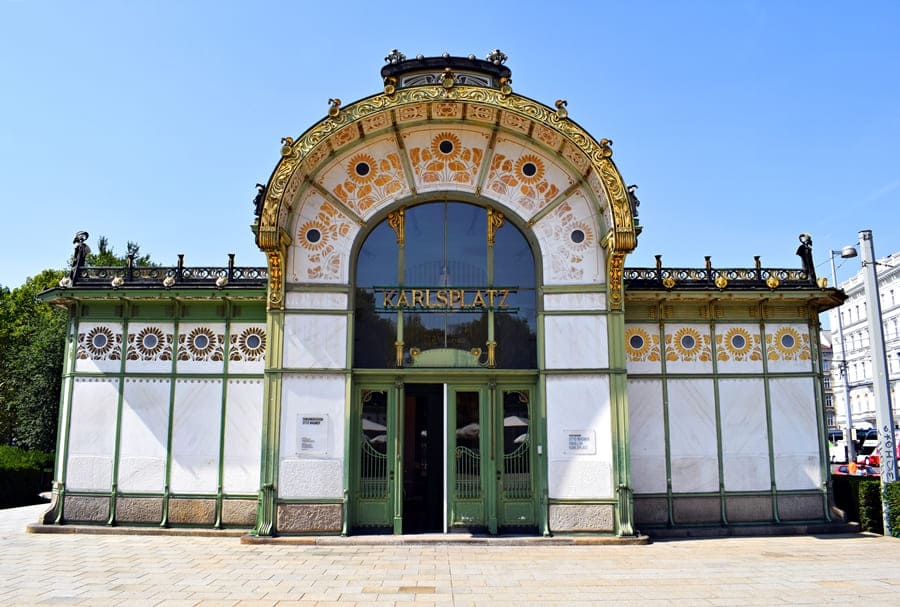 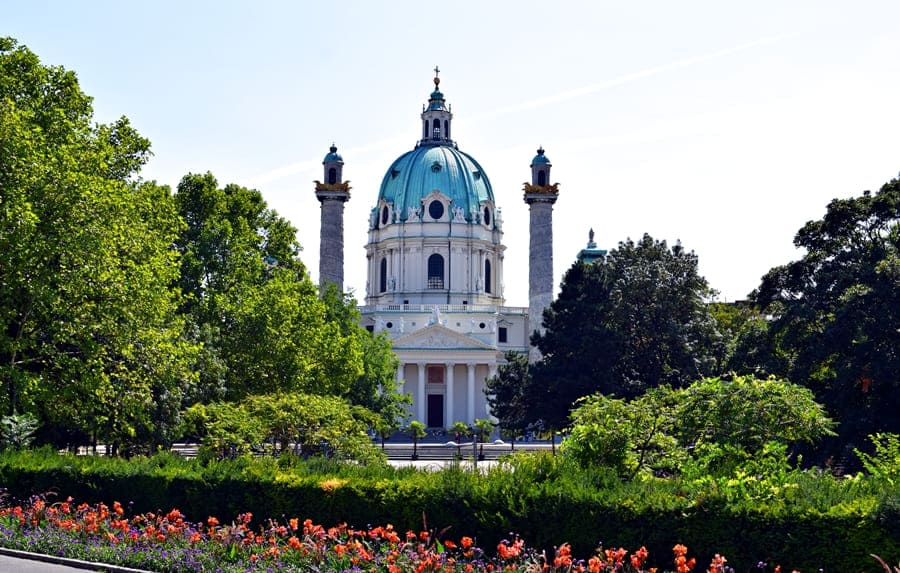 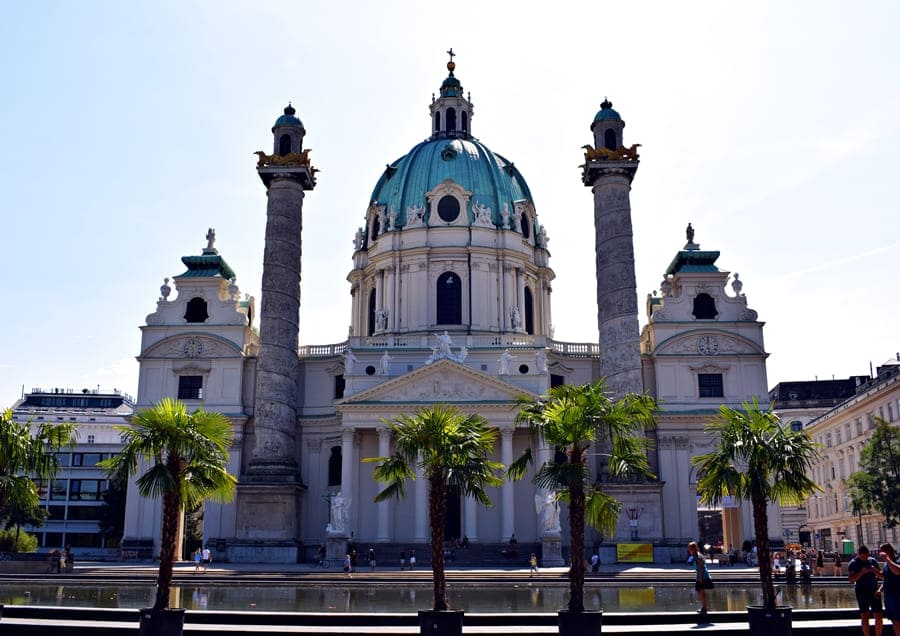 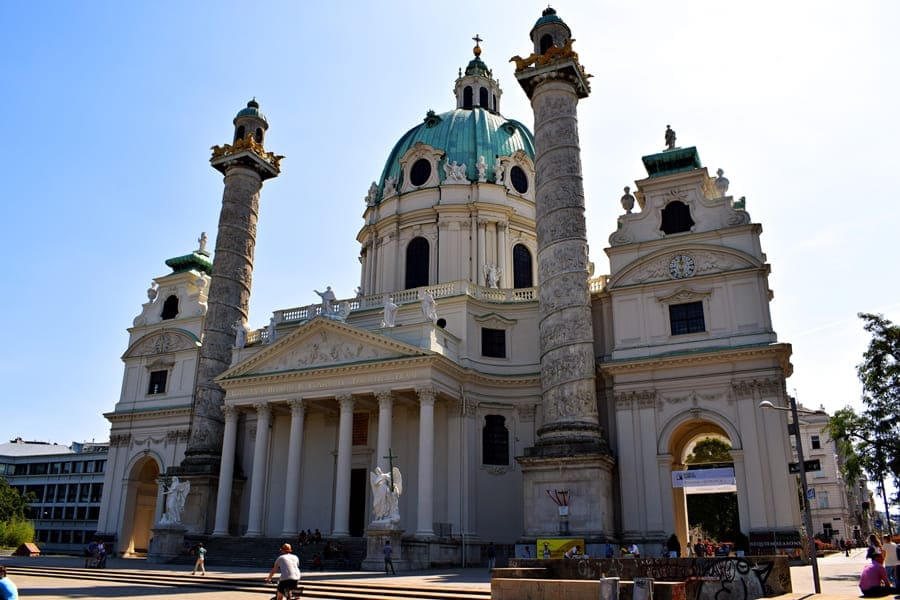 The external facade has two columns and a large dome. The entry to the church costs 8 euros. This ticket entitles you to access an elevator to get on a viewing platform at a height of about 32 meters, from which you can get a better look at the wonderful frescoes of the elliptical dome. The ticket is perhaps a little expensive, but it is worth it. In addition, concerts of sacred music are held inside. 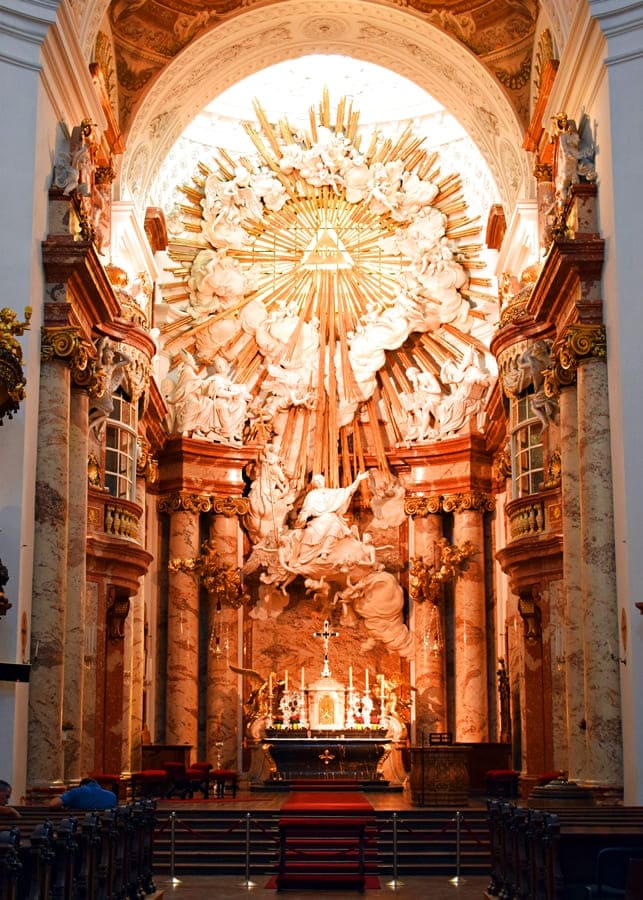 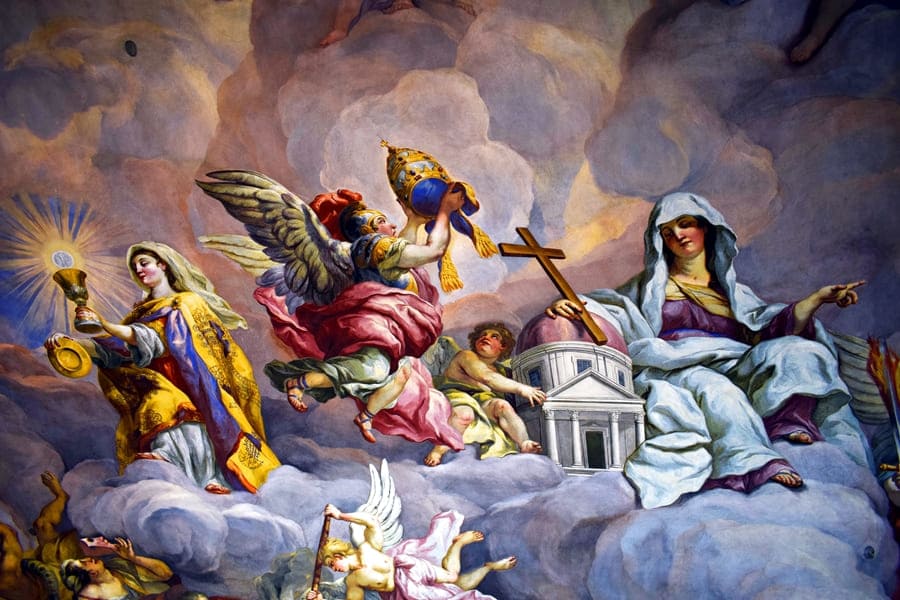 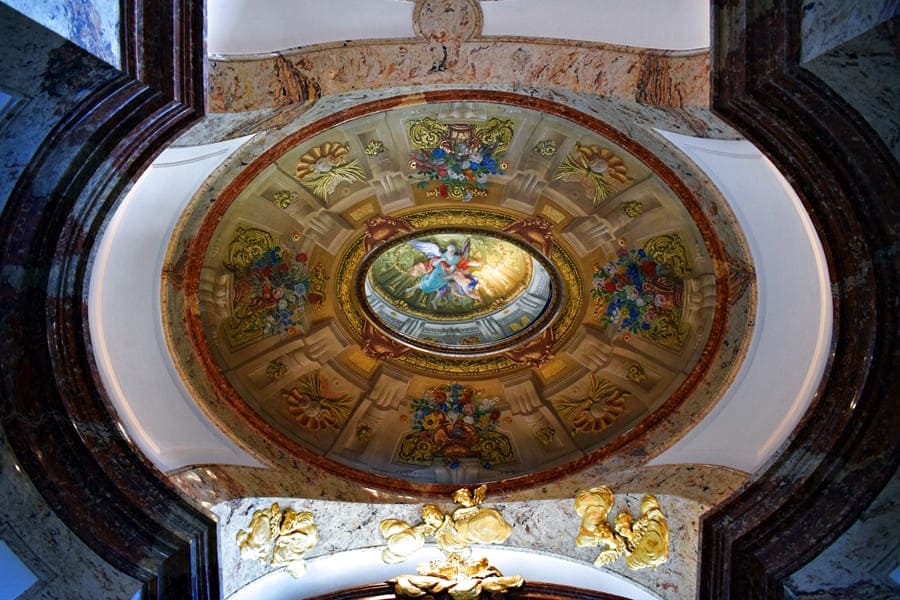 After lunch we moved to the Museum Quarter (MuseumsQuartier or MQ in German). It is located near the Hofburg Imperial Palace and contains baroque and modern buildings. The oldest ones are in Maria-Theresien-Platz. In this square, we find the Memorial to Empress Maria Theresa at the center of it and the Naturhistorisches Museum Wien (Museum of Natural History) and the Kunsthistorisches Museum (Museum of Art History). 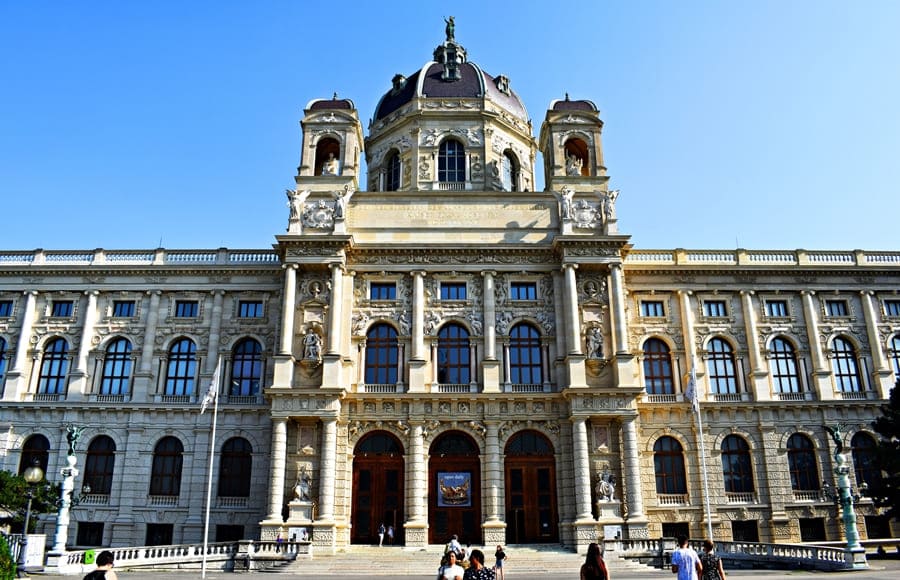 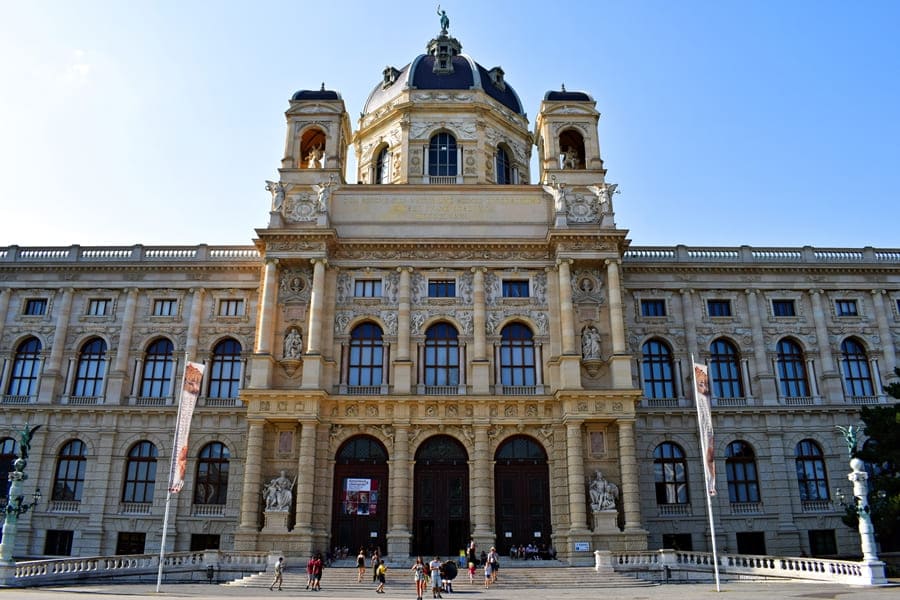 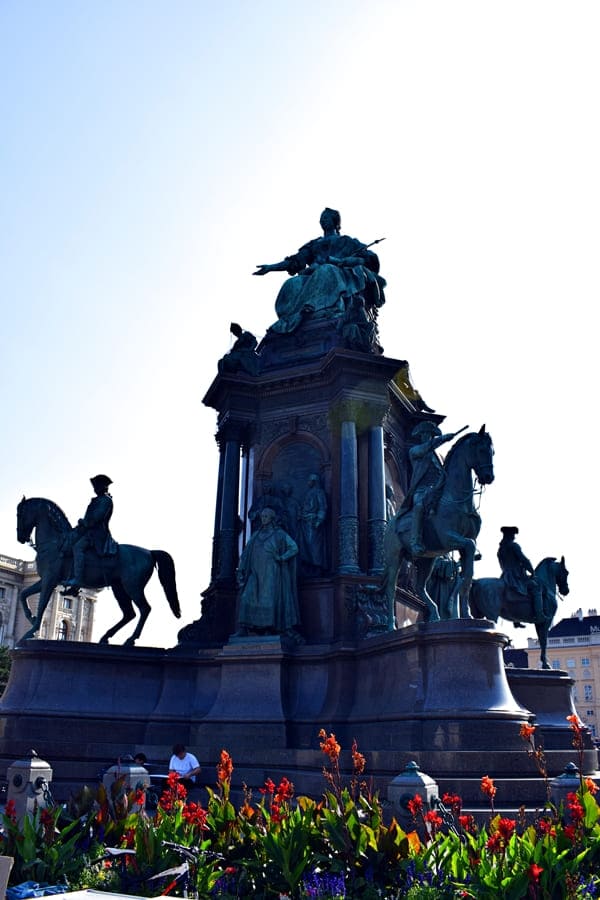 The Museum Quarter is one of the largest cultural areas in the world, but it is also a gathering place for Viennese people. This is evidenced by the many street food stalls and benches (some of them with bizarre shapes), where people stopped to relax and sunbathe.

Other museums in the Museum Quarter are: 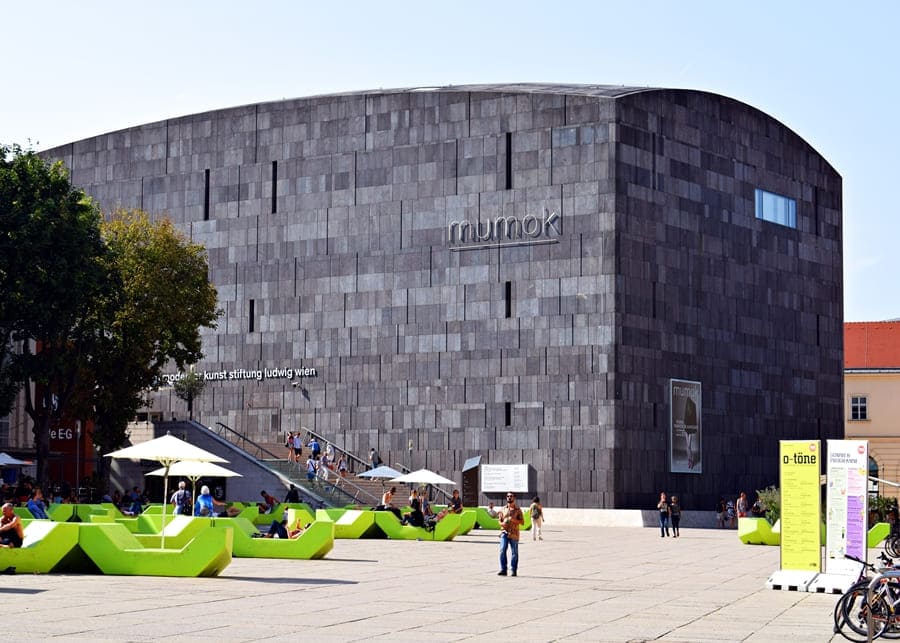 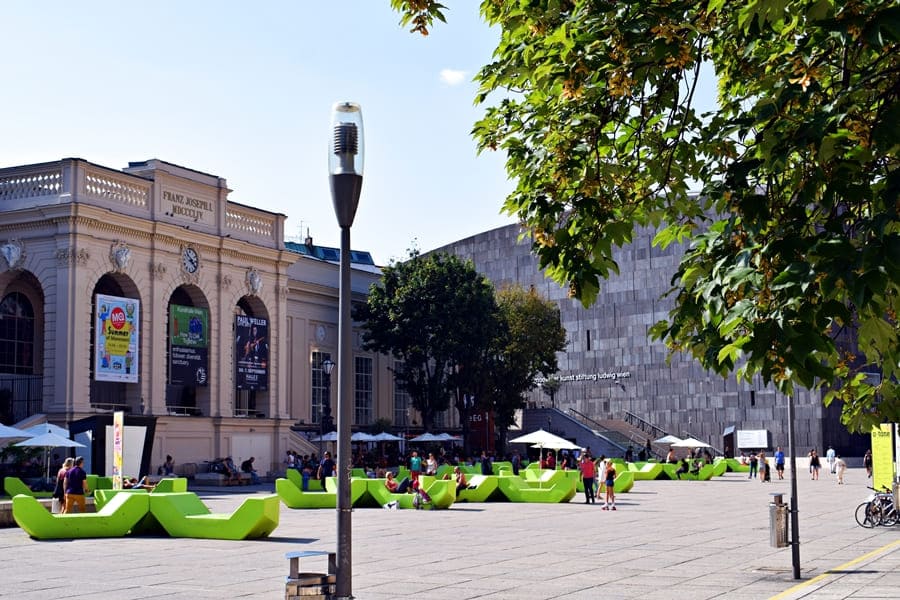 This article is the last one about my trip to Vienna. You can read more about this trip by clicking here.

Here is a video of the day, taken from my YouTube channel: